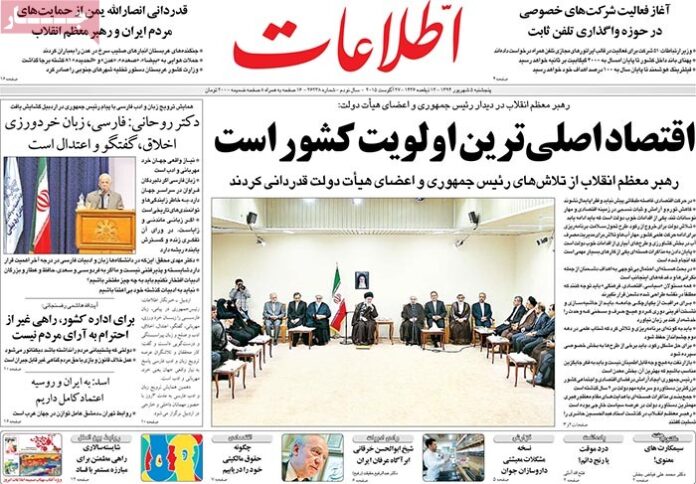 A special look at the headlines Ettela’at newspaper covered on August 27.

♦ “Economy is the top priority of the country,” said the Supreme Leader at a meeting with President Rouhani and his Cabinet.

The minister of communications further said that 51 companies have applied to offer cell phone services to the public.

♦ Yemen’s Ansarullah have thanked the Iranian people and the Supreme Leader for their support.

In another development, Saudi warplanes bombed a Red Cross storage facility in Aden.

♦ President Rouhani: Farsi is the language of wisdom, ethics, dialogue and moderation.

A message from the president opened a conference to promote the Farsi language in Ardebil.

♦ “To run the country, there is no other way but to respect the views of the public,” said the chairman of the Expediency Council.

Ayatollah Akbar Hashemi Rafsanjani said that a government that does not have the support of the public turns dictatorial.

♦ Syrian President Bashar al-Assad has said that he has full confidence in Iran and Russia.

He added that relations between Tehran and Damascus create a balance in the Arab world.