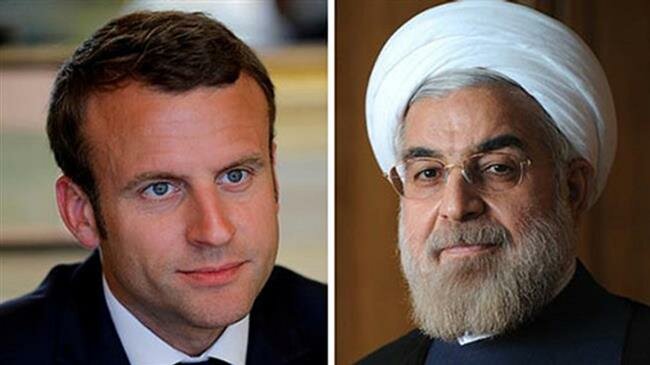 In a telephone conversation with President of France Emmanuel Macron on Monday evening, President Rouhani wished the French government and nation and people of the entire world success in the battle with COVID-19 pandemic.

“All countries and governments must keep in mind that they could not get through such delicate situation without assistance, cooperation and using the experiences of each other,” the Iranian president said.

He also noted that the foreign sanctions have made the fight against coronavirus more difficult for Iran compared to the other nations.

“While the US government has breached the international regulations by imposing illegal sanctions against Iran, it is still violating the health regulations ratified by the World Health Organization in 2005 with its measures under the current circumstances.”

The president further described as “positive but insufficient” the first steps that the three European parties to the 2015 nuclear deal have taken to bring the INSTEX into operation, stressing, “This path (INSTEX mechanism) should not be confined to the medical commodities and foodstuff alone, and we must be able to use it to supply all of our country’s demands.”

President Rouhani also welcomed the UN Secretary-General’s proposal for a global halt in armed clashes amid the outbreak of coronavirus, and expressed hope that such ceasefire would apply to the economic war against Iran as well.

“We expect the friendly countries to pressurize the US into lifting the cruel and unilateral sanctions under such conditions,” he stated.

The president then reiterated that Iran is prepared to fully honour its JCPOA commitments as soon as the whole sanctions are removed, noting, “The removal of sanctions and honouring the commitments by Europe is a necessity, and in such special conditions it has become more significant today.”

Pointing to Iran’s initiative for regional peace, known as the Hormuz Peace Endeavour (HOPE), President Rouhani said cooperation among the regional countries is the only way to ensure security of the Oman Sea, the Persian Gulf and the Strait of Hormuz.

“Iran does not welcome any tensions in the region, and has always made and will make efforts for the establishment of sustainable peace and stability in the region,” Rouhani underlined.

He finally stressed the need to respect the sovereignty of regional countries, noting,” Accordingly, we deem that some recent American moves in Iraq are a dangerous measure and to the detriment of the security of that country (Iraq) and the region.”

For his part, Macron briefed President Rouhani on the outbreak of coronavirus in France and other European states and the efforts to contain the disease, saying, “The world is experiencing tough situation, and I hope that all countries in the world would be able to weather such difficult conditions in cooperation with each other.”

President Macron also voiced France’s willingness to promote cooperation with Iran in all fields, pointed to the positive steps for starting to use the INSTEX, and expressed hope that the financial mechanism would increase the transactions between Iran and Europe and facilitate the financial cooperation between them.

He also highlighted Iran’s major and constructive role in the region, and emphasized the necessity of enhancing cooperation and bilateral, regional and international relations between Tehran and Paris in order to promote peace, stability and security in the region.