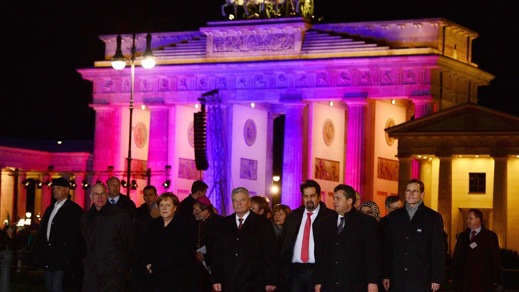 A tolerance rally by Muslims in Berlin, joined by German officials, condemns in the strongest terms acts of terror which are committed in the name of Islam.

Thousands of German Muslims, joined by the country’s political figures, staged a tolerance rally on Tuesday (January 13) to protest acts of terrorism as well as xenophobia and Islamophobia.

The Islamic Republic News Agency reported that the rally which was held at the Brandenburg Gate in Berlin was attended by the German chancellor, president and MPs as well as a host of party leaders, foreign ambassadors and religious leaders. The following is the translation of the report the official news agency filed:

After observing a minute’s silence in memory of the victims who lost their lives last week in Paris terror attacks, President Joachim Gauck told the rally that terrorists are seeking to create divisions in Western communities, but that these terror incidents would backfire and create more convergence among people.

He went on to say that freedom and human rights do not exclusively belong to the West or Europe; rather they belong to all humanity.

“Germany has become more diverse through immigration – religiously, culturally and mentally,” he added.

The German president then praised the Muslim community for its open opposition to terrorism and recent extremist acts in France.

The president further said that Germany-based Muslims view themselves as part of German society, adding that the Western governments are mainly concerned about the spillover of the crisis in the Middle East into Europe, growing extremism and xenophobia as well as the return of Syrian and Iraqi terrorists to Europe, calling for serious measures to fight extremism and violent acts.

Addressing the same rally, Aiman Mazyek, the head of the Central Council of Muslims, said that German Muslims have gathered here in solidarity with the French people in defiance of violent acts and extremism.

He emphasized, “The terrorists did not win and terrorist won’t win in the future.”

He then lashed out at attempts to fuel Islamophobia in the West and Europe in the wake of the recent terror attacks and pointed to a courageous act by a French Muslim who rescued some hostages during the Paris Kosher Market siege and said that Islam is bitterly opposed to acts of terror and violence.

Mazyek then addressed the terrorists and extremists and said that Muslims do not allow their religion to be taken hostage by acts of terror, adding Muslims won’t let terrorists stir hatred and divisions in communities.