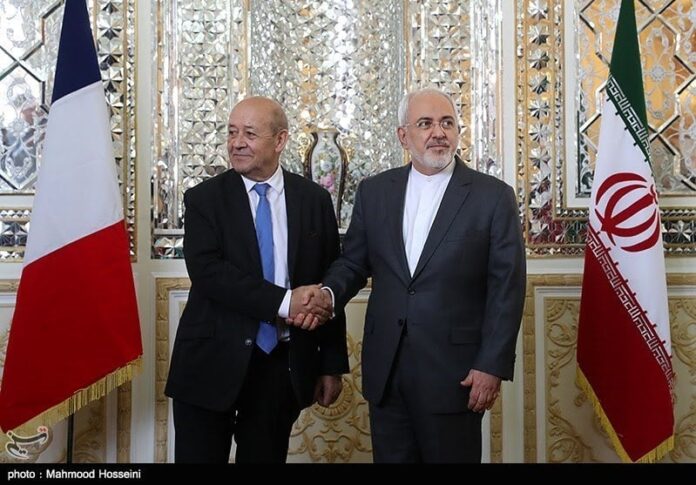 French Foreign Minister Jean-Yves Le Drian has reiterated the strong support of the EU, France in particular, for the implementation of the Iran nuclear deal despite the US stonewalling.

In a Monday meeting with Iranian Foreign Minister Mohammad Javad Zarif in Tehran, the French foreign minister once again expressed his country’s decision to respect, preserve and implement the JCPOA .

“France firmly believes that the JCPOA must be implemented. To this effect, we have adopted several broad measures including investing in Iran’s automotive industry and energy projects. We have also opened a special line of credit for commercial cooperation with Iran and investment in joint projects,” he said.

The French foreign minister also referred to France’s will to keep its deep and friendly relations with Iran and added Europe, especially France, is committed to and interested in the implementation of the JCPOA despite the US pressure.

“We have already adopted appropriate measures in banking relations and the French companies’ investment in Iran has grown enormously following the nuclear deal,” he said, adding that export guarantees and lines of credit are among the main signs of the investments made so far,” he noted.

For his part, the Iranian foreign minister praised France and other European sides’ principled stance towards the JCPOA but at the same time criticized some European officials for their remarks about and behaviours towards the nuclear deal and also being swayed by the US when it comes to the JCPOA.

“As a multi-lateral deal which came to fruition through the joint efforts of several sides including the European states, the JCPOA has been prone to illogical and politically-motivated tricks of the US,” he said.

The Iranian foreign minister noted that the International Atomic Energy Agency (IAEA) has confirmed in ten reports Iran’s commitment to the JCPOA, adding the Europe can play a more constructive role in preserving this international achievement.

“The Europe should completely fulfill its commitments under the deal and at the same time put pressure on the US to remain committed to it. It should not allow the US to press ahead with its illogical and illegal demands along with violation of the deal and efforts to hamper its implementation,” he said.

The Iranian foreign minister said preserving the international diplomatic achievement is equally important for all involved sides and added lip-services is not enough.

“If the international community is to satisfy only one side of the deal to remain in it, this is Iran which should be satisfied not the US because the latter has not only principally hampered the implementation of the deal but also pressurized the EU into not fulfilling its commitments,” he said.
During the talks, the foreign ministers of Iran and France also exchanged views on regional developments particularly those of Syria and Yemen.