Foreign Ministry has won the hearts and minds of Iranians 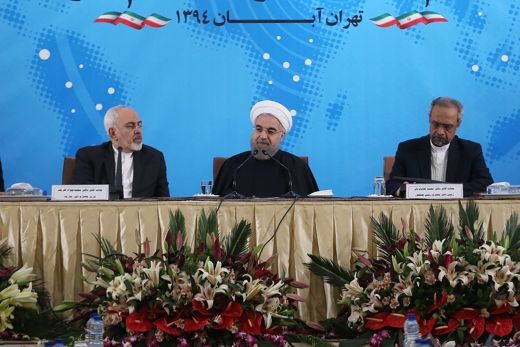 President Rouhani has said that the world has learnt that the settlement of a number of regional problems is all but impossible in Iran’s absence.

President Hassan Rouhani has said that backing down from principles has no place in Iran’s diplomacy machine, adding that the Joint Comprehensive Plan of Action (JCPOA) which is a big political victory for Iran serves as a global model to solve problems.

The president made the remarks in a meeting on Monday with foreign-based Iranian ambassadors and heads of Iran’s diplomatic missions across the world and added that the respect the world showed to Iranian diplomats was in fact a sign of respect for the greatness of the Iranian nation and that the Foreign Ministry today has found its way deep into the hearts of the Iranians.

Fararu.com on November 2 published President Rouhani’s remarks in the gathering and the following is the translation of part of the news website’s report:

We proved to the world that gone are the days of Iranophobia, and we practically supported our argument by presenting the World Against Violence And Extremism (WAVE) proposal which was unanimously adopted by the UN General Assembly.

According to the letter of the Constitution, being a revolutionary manifests itself in wishing prosperity for people all over the world, especially for Muslims or the great Islamic family and our neighbors.

We will implement JCPOA in line with the existing frameworks and the Supreme Leader’s instructions. We are making every effort to start the executive parts of the nuclear deal so that the cost people pay out of their pockets as a result of sanctions decreases.

The unfledged officials in a regional country without enough experience will reach nowhere by speaking harshly with the greats.

Iran has no doubt that the crises in Syria, Yemen and Bahrain can be solved diplomatically, and constructive interaction is needed to work out such diplomatic solutions.

If Saudi Arabia takes into account the realities on the ground when dealing with the region’s general questions and drops its policy of interference, a number of issues, including ties with Iran, can be settled in the new conditions. If Riyadh doubles back from the wrong path it had walked down, the way will be paved for cooperation.

In the modern world, no country can solve their problems and reach their objectives on their own. If we take the right path, we will reach a point where Iran’s isolation and imposition of sanctions will become impossible, because the government’s target is to cement efforts to promote deterrence in the face of isolation and sanctions.

The result of nuclear talks turned the Zionist regime into the most isolated regime in the world and today the world knows well that the settlement of a big number of regional problems hinges on Iran’s presence.

If we seek to compete with the world on the economic front, we have to find our way into international economic circles and be part of the process which makes decisions on tariffs levied by trade unions and other countries. This is one of the primary responsibilities of Iran’s ambassadors abroad.