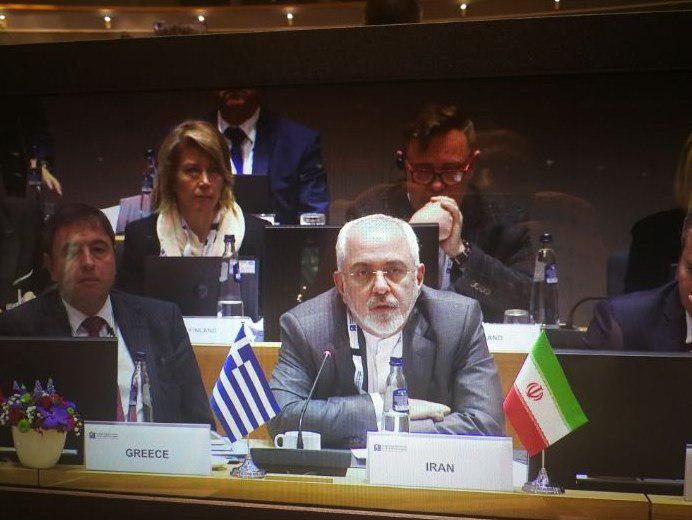 Iran’s has blasted the countries meddling in Syria, saying that foreign interference has delayed restoration of peace to the Arab state.

The second EU conference on Syria was held in Brussels, bringing together delegates from 80 countries. The event held Wednesday was jointly chaired by the EU and the UN, featuring a speech by Iranian Foreign Minister Mohammad Javad Zarif.

In his speech, the top Iranian diplomat said handling the humanitarian situation in Syria is a priority.

“If humanitarian assistance is in line with humanitarian principles, unconditional and not politically motivated, it could improve the living conditions of the displaced and refugees, and facilitate efforts to work out peaceful solutions to the conflict,” Zarif noted.

The foreign minister also reiterated the need for the establishment of a ceasefire in Syria.

“The establishment of peace in Syria should remain our top priority. Iran, in cooperation with Russia and Turkey, as the guarantor states of the trend of the Astana talks, is working towards expanding tension-free areas.”

“This process was formed based on the understanding that the Syria crisis can be settled only through political means and within the framework of a real, overarching political trend led by Syrian people while fully respecting the territorial integrity, sovereignty and independence of Syria,” he added.

He also referred to recent claims that Syria used chemical weapons in the country and touched upon the consequences of unilateral interventionist moves by certain countries.

“Largely affected by gas attacks in the 1980s, Iran condemns such strikes by any person and under any circumstances. We have always stressed the necessity of conducting impartial field research. At the same time, we denounce illegal unilateral military action. Foreign interference has only delayed the achievement of peace and will further aggravate the situation,” Zarif noted.

The foreign minister also said that Iran has been offering humanitarian assistance to Syrians.

“In recent years, Iran has been actively offering humanitarian aid to Syrian people, including those displaced on the Syrian soil as well as those under siege. We have already begun working with Syria to reconstruct the country, and we are also ready to interact with others in that regard,” he said.