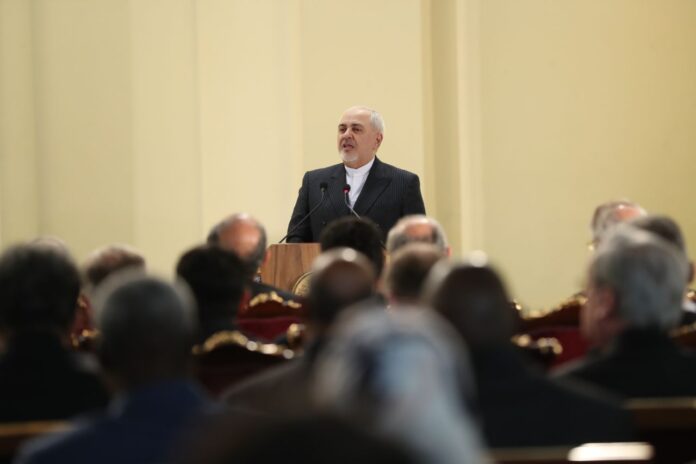 Minister of Foreign Affairs of the Islamic Republic of Iran Mohammad Javad Zarif has warned the parties which side with the US and call the heroes of the regional nations terrorists that they will definitely have no future in the region.

“Whoever sides with the US and calls the heroes of regional nations terrorist will definitely have no future in this region,” Foreign Minister Zarif noted.
Foreign Minister Zarif made the remarks in a Monday speech to a ceremony marking the 41st anniversary of the victory of the Islamic Revolution, attended by the Iranian President and foreign ambassadors in Tehran.

In his remarks, the top Iranian diplomat described the massive presence of people in the funeral of Iranian commander Lt. General Qassem Soleimani as an expression of hatred for the US policies in the region.

“Certain individuals have been dreaming about an end to the Islamic Republic for 41 years, and repeat their previous mistaken policies every day on the basis of such wrong understanding, and console themselves with a pretext every day that their expected day has come, and while the Iranian people reject such viewpoint with their presence, with the expression of views and with the support, they insist on their wrong outlook again with another excuse,” the minister added.

“If the people of Iran were to announce it to the US that ‘we oppose you and do not agree with your policies’, they could not do it any better than taking part in the ceremony commemorating Lt. General Soleimani; and if the regional people wanted to tell the US that ‘we abhor your policies and do not accept that you may define terrorism for us, because you yourselves are the leader of them (terrorists)’, they could not express this any better than by attending the commemorative service for Martyr Soleimani. The world will once again see the Iranian people’s epic tomorrow,” Foreign Minister Zarif noted.

The top Iranian diplomat finally advised the enemies to abandon their wrong dreams and not mistake the domestic quarrels and arguments in Iran for a gap between the Iranian people.

“What you considered as a rift between people became obvious in the funeral of Martyr Soleimani,” Foreign Minister Zarif told the enemies.