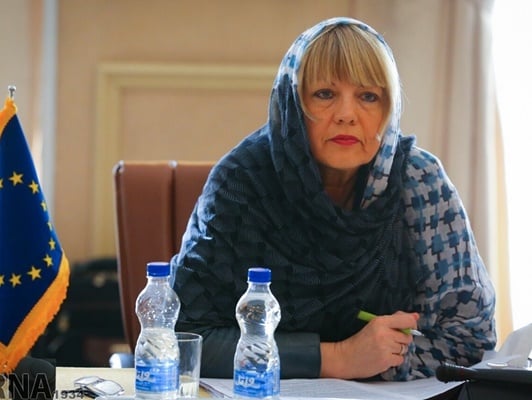 Helga Schmid, the Secretary General of the European External Action Service, says the EU is taking measures to help promote business relations between Tehran and European firms despite the imminent re-imposition of US sanctions.

Speaking in an exclusive interview with the Etemad daily newspaper, Schmid the EU is fully committed to mitigating the impact of US sanctions on European businesses.

She also declared that the bloc is taking steps to help maintain the growth of trade and economic relations between the EU and Iran that began when sanctions were lifted.

What follows is the full text of the interview conducted by Etemad’s Sara Massoumi:

With its unilateral withdrawal from the nuclear deal, the US has turned its back on the UN Security Council resolution as well as a multilateral accord. Is the any action underway in Europe to file a complaint against the US move or to condemn it?

As a matter of fact, the European Union has expressed deep regret at the decision of the United States to withdraw from the JCPOA and stressed very clearly that the EU remains fully committed to the continued, full and effective implementation of the JCPOA, so long as Iran continues to respect its obligations.

This was confirmed at the highest level by the 28 EU Heads of State or Government in the margins of the Sofia Summit on 16 May 2018.

The EU High Representative Federica Mogherini has also underlined this message at numerous occasions: the nuclear deal with Iran is crucial for the security of the region, of Europe and of the entire world. Together, with the rest of the international community, we are determined to preserve it.
At the Joint Commission meeting on 25 May that I chaired, on behalf of EU High Representative Federica Mogherini, and which was attended by the E3+2 (France, UK, Germany, China, Russia) and Iran, participants regretted the withdrawal of the United States from the nuclear deal and the announced re-imposition of US sanctions lifted under the JCPOA. They also stressed that the JCPOA was a key element of the global non-proliferation architecture and a significant diplomatic achievement endorsed unanimously by the UN Security Council in its Resolution 2231.

When the US withdrew from the deal, one of the major problems that emerged almost immediately was doubts on the part of firms such as Total to halt their cooperation with Iran. Many analysts are also saying that European governments cannot force these companies to stay in Iran as the firms will eventually decide for their own interests. In a situation like this, what guarantee from Europe could help Iran enjoy the economic benefits of the deal?

It is true that the announcement by the United States that it is withdrawing from the Iran nuclear deal and its decision to reinstate sanctions has the potential to have a negative impact on European companies which have invested in Iran in good faith since the deal was signed. The lifting of nuclear-related sanctions is an essential part of the JCPOA. The EU is fully committed to mitigating the impact of US sanctions on European businesses and is taking steps to help maintain the growth of trade and economic relations between the EU and Iran that began when sanctions were lifted.
At the EU level, the European Commission has taken steps to preserve the interests of European companies investing in Iran, including through:

Preserving the interests of businesses and investors can only be achieved by a combination of measures taken at national and European level. In this regard, intensive discussions are underway with EU member states to find practical solutions, in particular in the areas of trade and investment, oil, transport, and financing. National focal points have been appointed to coordinate these efforts. In addition, the EU has been in close touch with international partners, such as India, Japan or South Korea, who are interested to cooperate with the EU.

Ultimately, individual companies will continue to make their own assessments but what the EU is working at is putting in place a framework in which legitimate business can continue, and which supports those active in Iran. While a market economy does not work according to the principle of ‘guarantees’, a continued adherence to JCPOA commitments and to a rules-based and transparent business environment should continue to attract the international investment and trade that would benefit the Iranian economy and the Iranian people.

Iran says there will be no talks on regional issues or the country’s missiles program before the EU could show its goodwill in the JCPOA. That being the case, what strategies will the EU adopt on these issues vis-à-vis Iran?

The EU has always clearly emphasised its balanced approach to the region and urged all countries in the region to work towards de-escalation of tensions. Equally, the EU has expressed its concern with the regional military build-up, including Iran’s missile programme. The EU has called upon Iran to refrain from activities which deepen mistrust, such as ballistic missile tests, which are inconsistent with UN Security Council Resolution 2231. Because these issues are separate from the JCPOA, the EU continues to engage Iran in a format different from the JCPOA, for example with the dialogue that has started over the past few months, with first discussions on Yemen.