Environment Is Everything: Mayor of Tehran 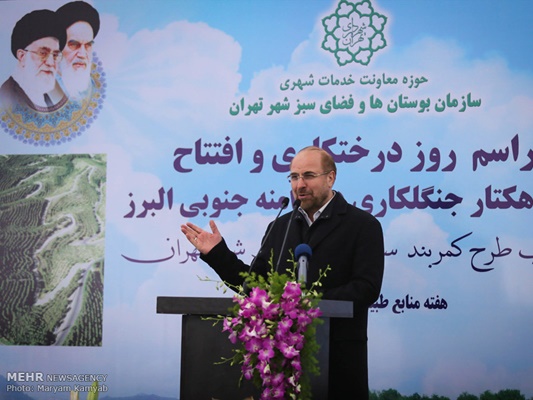 Tehran mayor says the environment is the most important index of quality in villages and cities, the loss of which will be a disaster.

Tehran Mayor Mohammad Baqer Qalibaf said efforts are underway by Tehran Municipality to preserve the city’s green spaces, adding, “We have come to this belief that if we lose the environment, [in fact] we will have nothing.”

Addressing a ceremony to mark the Week of Natural Resources and inaugurate a 100-hectare afforestation project in the southern foothills of Alborz Mountain range, Qalibaf stressed that everybody is required to endeavour to preserve and expand the country’s forests.

Tehran mayor added, “Although air pollution is a very important issue, it would not be plausible if we say that it has roots in the city’s population, as air pollution is caused by vehicles and other means of transportation [moving on the ground].”

“Efforts are required to improve the inefficient management in different domestic sectors by focusing on preserving the environment.”

Referring to his talks with Iranian Parliament Speaker Ali Larijani on doing the follow ups to minimise Tehran’s air pollution, he said he has repeatedly reminded him that inefficient management in some sectors is the first problem to be resolved to this end.

Currently, he added, such ineffective management is expanding its range penetrating into other sectors of the country.

Qalibaf noted that Tehran Municipality has done its best to purchase the city’s gardens and turn them into public places such as parks.

In only one of Tehran districts, the municipality has spent over $485 million to purchase private gardens and turn them into parks, and this shows the organization’s absolute determination to protect the city’s green spaces, he went on to say.

According to a Farsi report by ICANA, speaking in the same ceremony, Larijani said the report presented today by Tehran mayor indicates the municipality’s resolve to solve Tehran’s grave problems.

“The truth is that Tehran is a big city whose problems are clearly required to be solved. Naturally, the complexity of the city’s problems are in proportion to its largeness. Reducing air pollution is among the serious challenges of the metropolis that definitely needs to be dealt with. Resolving this problem requires a national resolve.”

He added creating a green belt in the area surrounding the city was a very effective measure which, providentially, received sufficient attention.

“Once completely created, the green space will improve the quality of life in Tehran and prevent the unrestrained expansion of the metropolis.”