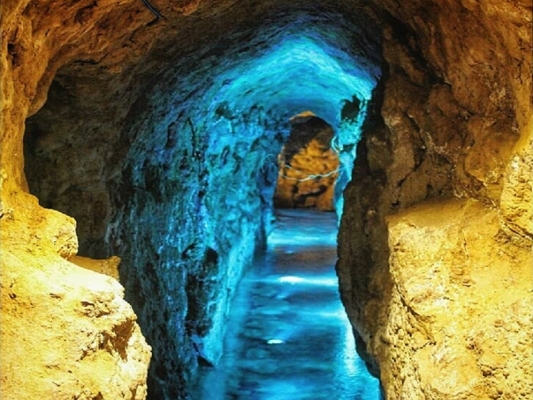 Qasabeh Qanat is an underground aqueduct in Gonabad, eastern Iran, about which scary myths and legends have long circulated among local people.

Creepy legends have grown about Qasabeh Qanat since a long time ago. In fact, the ancient people believed that it could not be constructed by humans and was made by super-human forces.

Most of what we know about this underground aqueduct are the stories that people of Gonabad have been narrating since the past.

Apart from mythical and historical stories about the qanat, archaeological investigations into the aqueduct led to the discovery of pottery collected from the main wells; proving that this strange aqueduct dates back to the Achaemenid dynasty.

French researcher Henri Goblot, in a book called “Qanats: A Water Acquisition Technique”, describes the underground aqueduct as an oddity. He considers this qanat to be a structure built using the techniques of engineering.

In his view, this qanat, which is the most original one in the world, is made by people who have had superhuman powers! Indeed, he confirms the creepy local legends!

He travelled to Iran in 1940 to do research and comment on modern irrigation methods. In his book, he attributes the culmination of creativity to the builders and engineers of Gonabad qanat.

It also has two underground corridors that are 33 km long as well as very deep wells, some of them 300 metres deep.

Gonabad qanat was first added to UNESCO’s list of tentative World Heritage Sites in 2007, then officially inscribed in 2016, collectively with several other qanats, as “The Persian Qanat“.

A qanat or kariz is a gently sloping underground channel to transport water from an aquifer or water well to surface with a series of vertical access shafts. It acts as an underground aqueduct, supplying water for irrigation and drinking.

Qanats still create a reliable supply of water for human settlements and irrigation in hot, arid, and semi-arid climates. Of course, the value of this system is directly related to the quality, volume, and regularity of the water flow.

Traditionally qanats were built by a group of skilled labourers, with hand labour. According to most sources, the qanat technology was developed in ancient Iran by the Persian people sometime in the early 1st millennium BCE. Later it spread from Iran slowly westward and eastward.