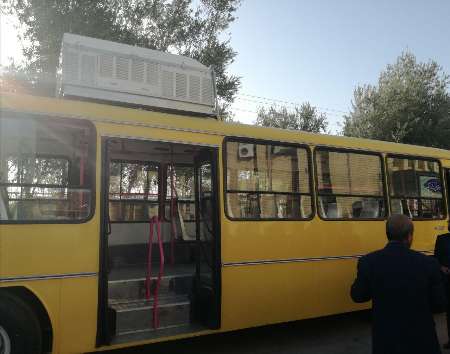 Iran has unveiled a bus equipped with evaporative cooler in the extremely hot and dry province of Sistan and Baluchestan in the country’s southeastern.

“The first bus equipped with evaporative cooler has been unveiled in the province and we are planning to overhaul and equip 20 old buses with the cooler over the next couple of months,” said Mojtaba Khanjani, the head of Sistan and Baluchestan Bus Company.

According to a Farsi report by IQNA, Khanjani went on saying that after the overhaul process, the old buses will provide the provincial commuters with easy inter-urban trips.

“After the overhaul, the old buses will also be equipped with a library. Meanwhile, their seats are totally changed,” he noted.

Khanjani also said about $1,000 has been spent to renew the first bus which is equipped with evaporative cooler to counter the extreme heat in the province.

Elaborating on the advantages of equipping the provincial buses with an evaporative cooler, he said, “The cost of maintenance of such ventilators is too low.”

He added the cost is not comparable at all with that of the vapour-compression refrigeration system.

“With the opening and closing of the buses’ doors, no big change is made in the temperature of the weather inside the busses,” Khanjani noted.

He also said evaporative coolers can keep cool the weather inside the buses even at the hot weather of 40 degrees celcius. The electricity for the coolers is provided by the buses’ engines without posing any dangers to the commuters.

“The required water for the coolers is also pumped from a reservoir installed under the busses,” he said.

“The first bus equipped with evaporative cooler in Iran was unveiled in the southern province of Kerman, and Sistan and Baluchestan province is among the pioneering provinces in this field,” he concluded.