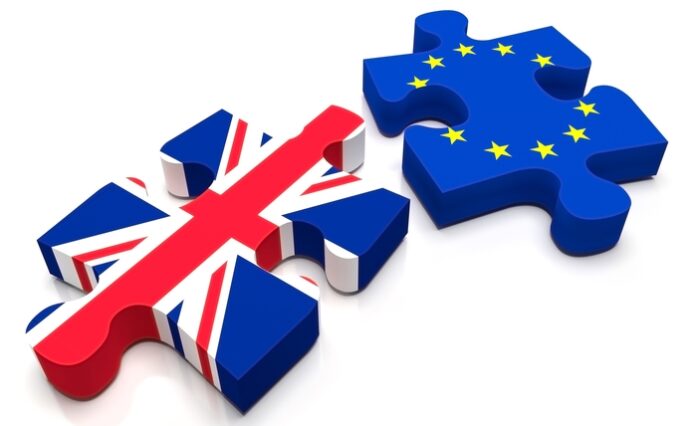 IFP has prepared a report on how Iranian newspapers covered Britain’s withdrawal from the European Union, commonly referred to as Brexit, on their Saturday headlines and editorials.

On Thursday, June 23, Britain voted to leave the European Union, forcing the resignation of Prime Minister David Cameron and dealing the biggest blow to the European project of greater unity since World War Two.

Global financial markets plunged as results from the referendum showed a near 52-48 percent split for leaving.

The pound fell more than 10% against the dollar to levels last seen in 1985, its biggest one-day fall in history, and European shares plummeted more than 8%, headed for their biggest ever one-day fall.

Many Iranian newspapers dedicated their front pages on Saturday to the globally-effective development. The reformist Aftab-e Yazd discussed Brexit’s impact on Iran, and raised questions about the remarks by certain analysts and officials who described the withdrawal as a ‘historic opportunity’. The paper used the headline “Which Historic Opportunity? Does Brexit Have Any Influence on Iran?” The other reformist paper Arman-e Emrooz also described it as a shock, using the headline, “Shock to the World: 52% of Britons Vote for Brexit”. “The Lonely Island: Great Britain Losing Its Greatness” and “London Becomes Lonely: Britain Votes for Brexit after 42 Years” were the headline of the economic newspaper Asia and the social paper Shahrvand, respectively. 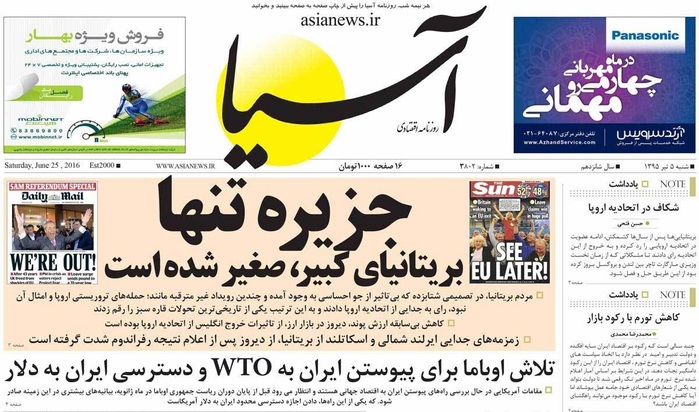 Many papers used the term ‘earthquake’ in their description of the exit. The reformist papers Ebtekar and Roozan used the headlines “British Earthquake in Eurozone” and “Earthquake of British “Identity”: Nationalists Made Britain Exit from EU”, respectively, and the conservative papers Kayhan and Javan used “Political Earthquake in Britain, EU on Verge of Collapse” and “Earthquake of Disintegration in Britain, Domino of Exit from EU: Britain’s Unity in Danger, Europe Becomes Shaky”, respectively.

Sobh-e Now’s headline was “Bubbles of United Europe Burst One by One: Britain’s Self-Requested Exit from EU”. Etemad focused on the generation gap in the votes for and against Brexit, using the headline “Riot of the Elderly: 61% of the Elderly Vote for Brexit, While 75% of Young Britons Vote against It”. There were also papers which paid attention to the benefits the Eastern Bloc, including China and Russia, would gain from Britain’s exit from the EU. “Separation in West, Wedding in East: Brexit Changes the Game in Favour of China and Russia” was Haft-e Sobh’s headline. It also reported that “Gold Price Amazingly Sours after Brexit”. The conservative Vatan-e Emrooz discussed the “Riot of the Island: Historic “No” of Britons to All Major Parties”. Nationalism and neo-fascism were also highlighted by Iranian media. Roozan published an article entitled “Big Elephant and Neo-Fascism in Europe: Trump’s Role in Brexit”. Resalat also discussed the “Return of Nationalism to Europe”. The most interesting headlines seemed to be Hamshahri’s “Sunset of the Empire” and Etemad’s editorial “A Bitter Divorce after a Marriage Out of Expediency”.

There were also other brilliant editorials focusing on the issue. Jame Jam’s editorial was entitled “Return of Trojan Horse to the Island”, alluding to French ex-President Charles de Gaulle, who viewed Britain as the USA’s Trojan horse in Europe. Javan also focused on “Brexit’s Influence on Iran’s Economy” in its editorial. Khorasan’s editorial described Brexit as “An Opportunity for ‘Second Europe’ Strategy”.

Arman-e Emrooz, Jomhouri Eslami, and Vaghaye Ettefaghieh were also among several newspapers which focused on the repercussions and aftershocks of Brexit in their editorials.