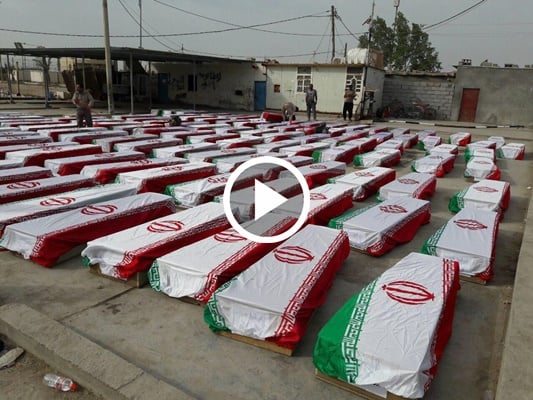 A senior defence official says Iranian explorers have recovered the remnants of 65 unidentified martyrs of the Iraqi imposed war (1980-88), some 30 years after the end of the longest battle in the 20th century.

The bodies have been found in a mass grave in a quagmire in Bawarin island near Iraq’s Basra in recent days, said Brigadier General Mohammad Baqerzadeh, who heads the Armed Forces General Staff’s Committee for the Search of the Missing in Action.

Among the bodies were some members of the diving units of the Iranian military, who have been killed in operations Valfajr-8 and Karbala-4, he told Tasnim News Agency in a Farsi interview published Tuesday.

The operation Karbala-4 has become a familiar name for Iranians in recent years, as the bodies of 175 Iranian divers who were reportedly buried alive with their hands tied during the operation were recovered inside Iraq in 2015.

Their funeral ceremony gathered a large crowd in Tehran.

Baqerzadeh said a total of 115 bodies of unidentified martyrs are planned to be transferred to Iran in the coming days.

The bodies will be first sent to the Iranian capital of Tehran for identification.

Then they will be buried in different places, including universities, seminaries, premises of state organizations and a number of public parks across the country.

Baqerzadeh said the bodies of over 4,000 Iranian martyrs have yet to be discovered inside Iraq.

The Iran-Iraq war, imposed on Iran by former Iraqi dictator Saddam Hussein, left hundreds of thousands of casualties from both sides.