Biden Must Respect Other Nations’ Rights to Restore US Credibility: Iran 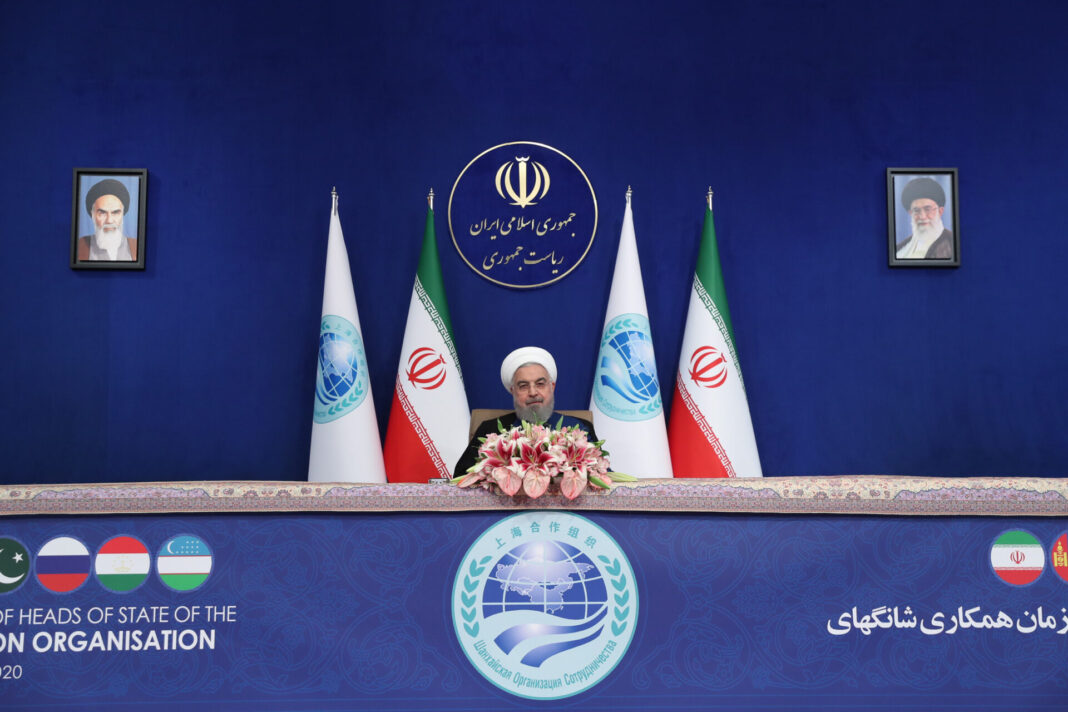 Iranian President Hassan Rouhani says the incoming administration of US President-elect Joe Biden must honour the other nations’ rights and re-embrace adherence to recognized international law if it wants to restore America’s credibility.

President Rouhani made the remarks in an address to the 20th Meeting of the Council of Heads of State of the Shanghai Cooperation Organisation (SCO), which was held through video conference on Tuesday.

“Re-embracing adherence to recognised international laws, regulations and obligations, honouring other nations’ rights and compensating the losses incurred are prerequisites to healing the US credibility across the world,” he noted.

The Islamic Republic of Iran has invariably emphasised its principled policy of strengthening good neighbourliness, confidence-building and dialogue with its neighbours in such regions as Eurasia, the Persian Gulf and West and South Asia, he said.

“We will continue our cooperation with our partners as also with the SCO to effectively counter terrorism, extremism and drug trafficking,” he added.

Rouhani noted that as one of the most important conduits of energy, a regional arterial route that possesses rich energy resources with access to two important waterways, and thanks to its geopolitical position, Iran can supply needs of most regional countries, including SCO member states.

Praise be to God and peace be upon Allah’s Messenger, his followers and his companions

At the outset, I would like to express my gratitude to His Excellency Mr Vladimir Putin, the Honourable President of the Russian Federation for organising this summit. I am also delighted to have found the opportunity to be participating in the summit, albeit through video-conference.

The world is presently in a precarious situation. On the one hand, COVID-19 pandemic has profoundly ravaged economies, particularly the livelihood of the people, and has posed grave threats to individual lives. On the other hand, US’ pursuance of unilateralism and dismissal of respect for international law and institutions has further burdened co-thinking countries to double down their efforts to strengthen cooperation and form a united front in the face of both challenges combined.

In order to counter the shared challenges of COVID-19 pandemic, it is urgent that SCO member states, in coordination with the UN and WHO, proceed to adopt a coherent and unified approach whereby they should ensure the full, free and equitable access of all regional and global populations to healthcare services and medical equipment intended for better combat against the disease. To this end and for improving on their conditions, the Islamic Republic of Iran provided some regional countries with humanitarian aid. We also register our readiness to share with other member states our experiences in combating COVID-19.

The Islamic Republic of Iran has invariably emphasised its principled policy of strengthening good neighbourliness, confidence-building and dialogue with its neighbours in such regions as Eurasia, the Persian Gulf and West and South Asia. For the Islamic Republic of Iran, sustainable security is viable but through cooperation, participation and peace. The proposal of the Hormuz Peace Endeavour (HOPE), involvement in the Astana Peace Process, supporting peace and stability in Afghanistan and emphasis on increased multilateral cooperation among SCO member states are notable examples, to name a few, of the attention extended by the Islamic Republic of Iran to participation and cooperation for sustainable regional and global security.

In order to address regional challenges in security, political and economic fronts, the Islamic Republic of Iran welcomes cooperation within the framework of the SCO Iran has always equalised the security of the surrounding region with its own security and has unfailingly exercise efforts to preserve regional peace and stability. Along similar lines, we will continue our cooperation with our partners as also with the SCO to effectively counter terrorism, extremism and drug trafficking.

Combating terrorism, extremism and separatism is a pivotal principle in cooperation bids among regional countries and SCO members. Averting the spread of an ideology of violence and extremism, collectively dealing with currants and entities that breed and disseminate extremist thinking in the region, and identifying inception grounds of terrorist groups as well as their sponsors and financial resources are one of the crucial joint missions of the SCO under collective security. Owing to years of extensive experience in combating terrorist groups in Syria and Iraq, the Islamic Republic of Iran registers its readiness for action against such terrorist groups as also against extremism. Earlier this year, one of the greatest commanders of the forefront of the Islamic Republic of Iran’s struggle against terrorism, Lieutenant General Qasem Soleimani, was, in an act of cowardice, assassinated and martyred by the very creators and sponsor of Takfiri and terrorist currents. Nevertheless, we are still determined to pursue our cause of complete suppression of extremist terrorists and extermination of occupation by outsiders. In this regard, the resolution tabled by Iran titled “World Against Violence and Extremism (WAVE)” passed by UNGA with 190 affirmative votes in December 2013, could serve SCO for further practical measures.

As a neighbour of both the Republic of Azerbaijan and Republic of Armenia and in view of our numerous historical commonalities with regional peoples, the Islamic Republic of Iran expresses its satisfaction with the recent decision by the leaders of the two countries with the Russian Federation’s intervention to end the military conflict and begin the process of diplomatic resolution, and hopes that the two countries can settle their disputes in a peaceable environment and within the framework of international law. To this end, Iran presents a peace plan in order to establish a ceasefire and establish peace, and also conduct intensive negotiations with the conflicting parties and other countries of interest, and we shall not spare any effort to de-escalate tensions and disputes and establish sustainable and fair security, stability and peace in this region.

The foreign policy of the Islamic Republic of Iran has consistently been based on good neighbourliness, peaceful coexistence and ever-increasing development of trade and economic ties with neighbours and friendly countries to serve the goal of regional economic growth and development. In this context, we have presented initiatives and have welcomed the initiatives of friendly countries as well. It is necessary to make maximum use of joint cooperation opportunities for the betterment of welfare and livelihoods of the residents of this region as also for regional sustainable development and poverty alleviation.

Expansion of energy transfer lines and development of communication routes in region are regional cooperation mechanisms of massive import. As one of the most important conduits of energy, a regional arterial route that possesses rich energy resources with access to two important waterways, and thanks to its geopolitical position, Iran can supply needs of most regional countries, including SCO member states.

Iran’s geographical location in being on various corridors, particularly North-South Corridor, presents a crucial and stable opportunity for friendly regional member countries to develop their extra-continental communications and free themselves of geopolitical constraints within this mechanism. I am pleased to inform you that the soon-to-be-completed Rasht-Bandar-e Anzali Railroad on the coast of the Caspian Sea, the railroad of North-South Corridor will become a reality and shall unleash massive transit potential. We are also putting in efforts to complete Rasht-Astara Railroad in the shortest possible time with the objective to create an integrated railroad system that extends from the Persian Gulf to Russia and Northern Europe and satisfy an importance international need.

Completed with developmental assistance of the Islamic Republic of Iran, Khaf-Herat Railroad will also be inaugurated within the coming weeks. This railroad would be a gift and a veritable asset for Afghanistan’s bid to break its deadlock. Extending this railroad to Mazar-i-Sharif could not only help Central Asian countries have easier and less expensive access to international waters and Europe, but will also make the Middle East and Iran’s markets available to them.

Political and economic multilateralism has been seriously threatened in recent years with the US attempting to impose, with unmitigated bullying, its domestic policies and laws on the world order and countries with political independence. The US presidential election results showed, yet again, that the world is not alone in opposing the wrong policies of the incumbent US administration. The very US public has been beset by such policies. The US people saw the world’s response to bullying, law aversion, breaches of international commitments, threatening and functioning and decided to bring about a change.

Once again, the history imposed the eats reality on the ruling arena and the political sphere and taught another lesson to adventurers, war-mongers, adversaries of nations’ rights and violators of undisputed international rights. The US presidential election results shows that a country constantly wielding threats, sanctions and sticks and taking a bullying tone with other nations must be pursuing a misled foreign policy.

Now the field is clear for new US elected leaders to grasp the message of their people and translate this determination for change into their foreign policies and their ties with other countries and states. Re-embracing adherence to recognised international laws, regulations and obligations, honouring other nations’ rights and compensating the losses incurred are prerequisites to healing the US credibility across the world.

In conclusion, I avail myself to the opportunity to express my gratitude to the Honourable President of the Russian Federation and other organisers of this summit and wish for further glory and prosperity of the Russian government and people.