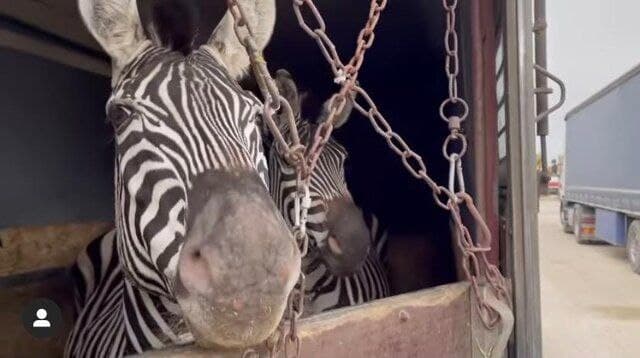 The zoo in the town of Safadasht west of Tehran has provided explanations about the death of an African zebra shortly after his transfer to Iran from the Netherlands.

Three African zebras, two females and one male, were recently transferred from the Netherlands to a zoo in Safadasht, but the male zebra died before arriving at the zoo. A video was also released showing unpleasant circumstances under which the animals had been imported.

“A survey by the team of veterinarians at the zoo showed that the reason behind the death was extreme stress and internal infection during the transfer as well as unwarranted delay at the customs,” the zoo authorities explained.

They particularly put the blame on Iranian customs officials for delaying the process of clearing the three zebras.

“The Turkish customs cleared the shipment without delay, and the three zebras arrived at the Iranian customs,” said officials at the zoo.

“Unfortunately, as soon as the animals arrived at Bazargan customs, and because of mismanagement by guards inside the customs, some individuals rushed towards the vehicle to take photos of the zebras,” they added.

“This caused the zebras to stampede and get out of the vehicle and, unfortunately, fall inside a water canal at the customs a video of which has been published on social media,” the zoo authorities said.

At last, they added, one of the zebras lost its life while being taken to the zoo.

“Authorities at the Bazargan customs were expected to understand the issue with sensitivity and facilitate the process of the clearance of the animals, so that such a thing would not have happened,” they complained.