A look at Iranian newspaper front pages on July 13

Nuclear talks at home stretch and the guesswork on whether a deal is achieved by the July 13 deadline dominated the front pages of all Iranian newspapers on Monday. Also in the news were the mass resignation of 18 MPs from Fars Province in protest at the government’s appointment of a new governor general and reactions by some dailies which described the deputies’ move as an attempt at blackmail.

Ettela’at: “Ideology cannot be passed along unless through convincing,” said the Supreme Leader at a meeting with a large number of university students. 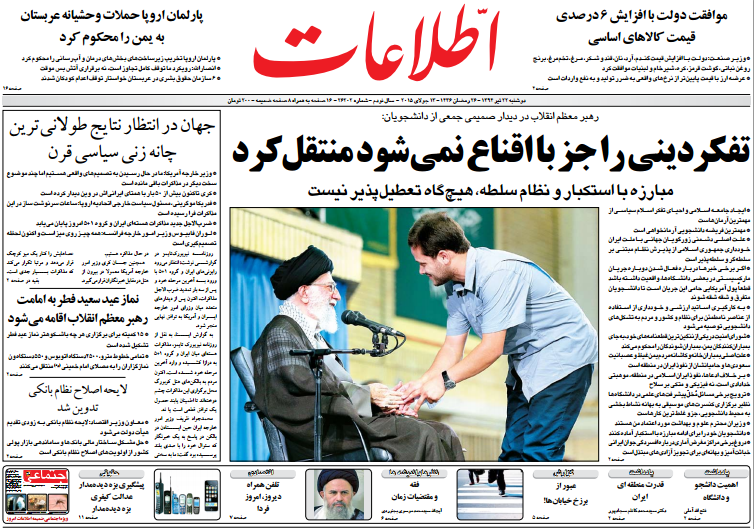 Afkar: As many as 203 Iranian MPs have appreciated the resistance of the country’s negotiators in nuclear talks. Aftab-e Yazd: “I made good on my [election] promise,” said President Rouhani [about the settlement of Iran’s nuclear case and a possible deal between Iran and P5+1].

The daily has published a special report on the “theatrical” resignation of Iranian deputies representing Fars Province. Arman-e Emrooz: The spokesman of police force has said that the law enforcement forces are ready for the celebrations people are likely to hold for a nuclear deal [Iran and P5+1 will clinch on Monday].

Arman-e Emrooz: Mass resignation to pile pressure on the government

As many as 18 MPs representing different cities in Fars Province have submitted their resignation to parliament’s Presiding Board in protest at the appointment of a new governor general for the province. Asrar: “We are trying to win all 30 Tehran seats in parliament,” said Mohammad Reza Aref, a reformist. Ebtekar: Ali Motahari, a Tehran MP, has asked the government not to back out.

Motahari made the comment in reaction to mass resignation of deputies representing Fars Province in the Islamic Consultative Assembly.

Ebtekar: The president has communicated a piece of legislation which obliges the government to safeguard the country’s nuclear rights and achievements. Emtiaz: Women account for 37 percent of panhandlers in the country.

An official with the State Welfare Organization of Iran has given a report on how beggars are being sheltered in the country. The world is waiting to see a nuclear deal clinched [between Iran and six world powers] and Israel is worried about the victory of diplomacy [over confrontation].

President Rouhani: I have lived up to my promise as far as the nuclear issue is concerned.

FM Zarif: Extension is no option. “We stand by people,” said the police spokesman. Hambastegi: “The number of female breadwinners rises by ten percent each year,” said the head of the State Welfare Organization. Hamkari-e Melli: A big decision at the final stop of nuclear talks

A meeting was held between [representatives from] Iran, the US and Europe to put the finishing touches [to a nuclear deal]. Hemayat: “The fight on colonialism is the essence of the Islamic Revolution”.

Remarks by the Supreme Leader have been covered by foreign media. Iran: The seal of approval by Baharestan [a Tehran street where the parliament building is located] on the performance of the nuclear team

Iran: “Up to five million foreign tourists visited Iran in the March 2014-March 2015 period,” said the deputy chief of the Cultural Heritage, Handicrafts and Tourism Organization for tourism affairs. Kayhan: “Agreement within the framework of the Lausanne document spells a failure,” the daily wrote in its analytical report on what will come out of nuclear talks in Vienna. Mardomsalari: A member of parliament’s Energy Committee has said that the number of oil derricks which went missing [when Mahmoud Ahmadinejad was president] is more than what has been announced previously. Resalat: “Those who sparked the 2009 events [a reference to two presidential candidates who disputed the election result and triggered unrest in the country] are not trustworthy,” said Ayatollah Khamenei. Setareh Sobh: Behind the scenes of the resignation of 18 MPs from Fars Province

The deputy interior minister has said that the government’s pick to take over as Fars governor general has managerial experience.

The daily has described FM Mohammad Javad Zarif’s signature smile as diplomatic in its special report on nuclear talks at the final stop. Shahrvand: A few steps away from a [nuclear] deal Sharq: The Day of Major Event

The 12-year-old nuclear challenge comes to an end on Monday.