Several newspapers covered the controversy sparked by the presence of a number of Iranian ministers and officials in a ceremony in Swedish ambassador’s house in Tehran and the deals signed during the ceremony.

They also covered the ongoing crisis in Iran’s southwestern province Khuzestan, particularly the dust pollution and its harmful effects on citizens.

The new oil reserves discovered in Iran and the snow and rain that have hit several Iranian provinces were among other top stories today. 3- Trump, an Opportunity for Enhancement of Iran-Europe Trade 1- They Viewed the Ceremony as a Party: Hardliners Making a Fuss about Presence of Some Officials in Swedish Ambassador’s House and Signing of Certain Deals

2- Analyst: US Needs War to Continue Its Capitalist Nature

3- Reformist MP: I’m Worried that They Stop Supporting Rouhani; He Has Not Communicated with Lower Classes of Iranian Society 2- Secretary of HQ Tasked with Reviving Lake Urmia: Future Generation Will Have to Immigrate 1- Contraband vs Beauty: A Report on 55% Share of Cheating and Contraband Goods in Cosmetics Market 1- Judiciary Chief: No Need for ‘National Reconciliation’ as Iranian People Are Good to Each Other

2- Sorrow of Khuzestan amid Rainfall across Iran 2– Warning about Flood in 8 Provinces: Iran Hit by Ran and Snow 1- Senior Conservative Bahonar: Conservatives Will Nominate a Candidate to Compete with Rouhani

2- Mogherini: Some of Europe’s Anti-Iran Sanctions Harsher than Those of US 1- Reteurs: The Diplomat Sheikh Is Only Man Who Can Overcome Trump 1- Trump’s Order Threatens Iranian Embryos: Iranian Doctor Living in US in a Dilemma 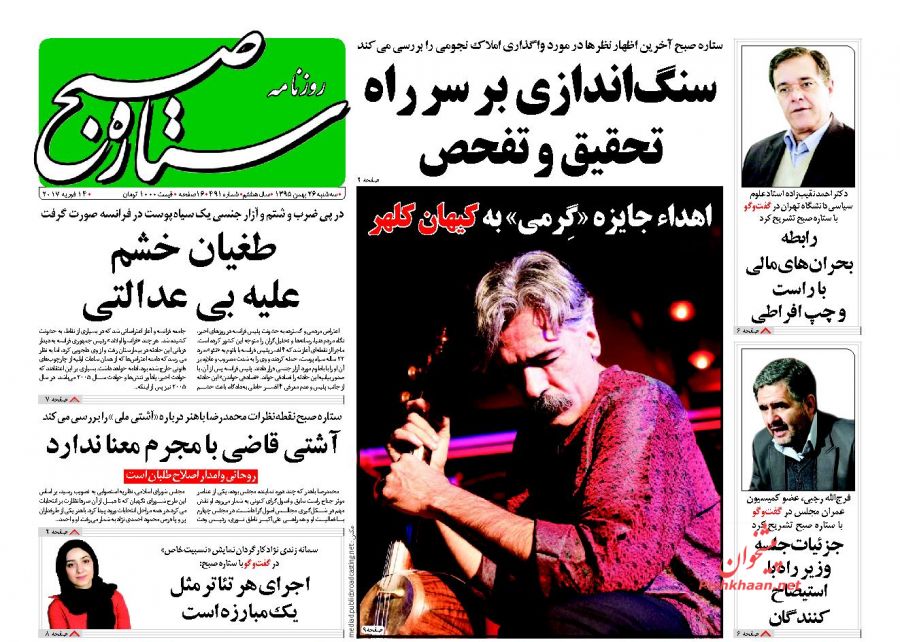 1- Judiciary Chief: I’m Not against National Reconciliation, but It’s Not Needed in Iran

3- Iranian Lobbyists Infiltrate in All Important Parts of US Society: Trump Aide

1- Buying Corpses from Mafia: Universities Buying Corpses for Autopsy by Paying Full Blood Money. However, 100 Unknown Bodies Are Found Every Week; Rules against and Punishment of Body Organ Smugglers 1- What Happened in Ambassador’s House: Critics of Rouhani’s Government Kicking Up a Fuss about a Dinner 2- A Look at Flynn’s Scandal: Will He Become a Shield for Trump? 2- Tehran-Moscow Coalition: A Report on Main Players of Astana II Summit and Its Goals

2- In Reaction to National Reconciliation Plan, Judiciary Chief Asks Those Who Caused Sedition after 2009 Presidential Votes to Admit Their Mistake and Join People

3- Slogan in Bahrain: Al Khalifa Should Be Executed