A Look at Iranian Newspaper Front Pages on April 10

IFP has taken a look at the front pages of Iranian newspapers on Wednesday, April 10, 2019, and picked headlines from 13 of them. IFP has simply translated the headlines and does not vouch for their accuracy.

The US administration’s designation of the Islamic Revolution Guards Corps (IRGC) as a “foreign terrorist organization” and Iran’s reciprocal move to blacklist the US CENTCOM, and consider the US government as a “state sponsor of terrorism” remained the top stories today.

The remarks by the Leader of Iran’s Islamic Revolution Ayatollah Seyyed Ali Khamenei about the US’ move, and the Iranian parliament’s support for IRGC by wearing its uniforms also received great coverage.

3- Rouhani: US’ Move against IRGC Rooted in Their Grudge

4- Pentagon: Rules of War Not Changed for Our Forces in Mideast 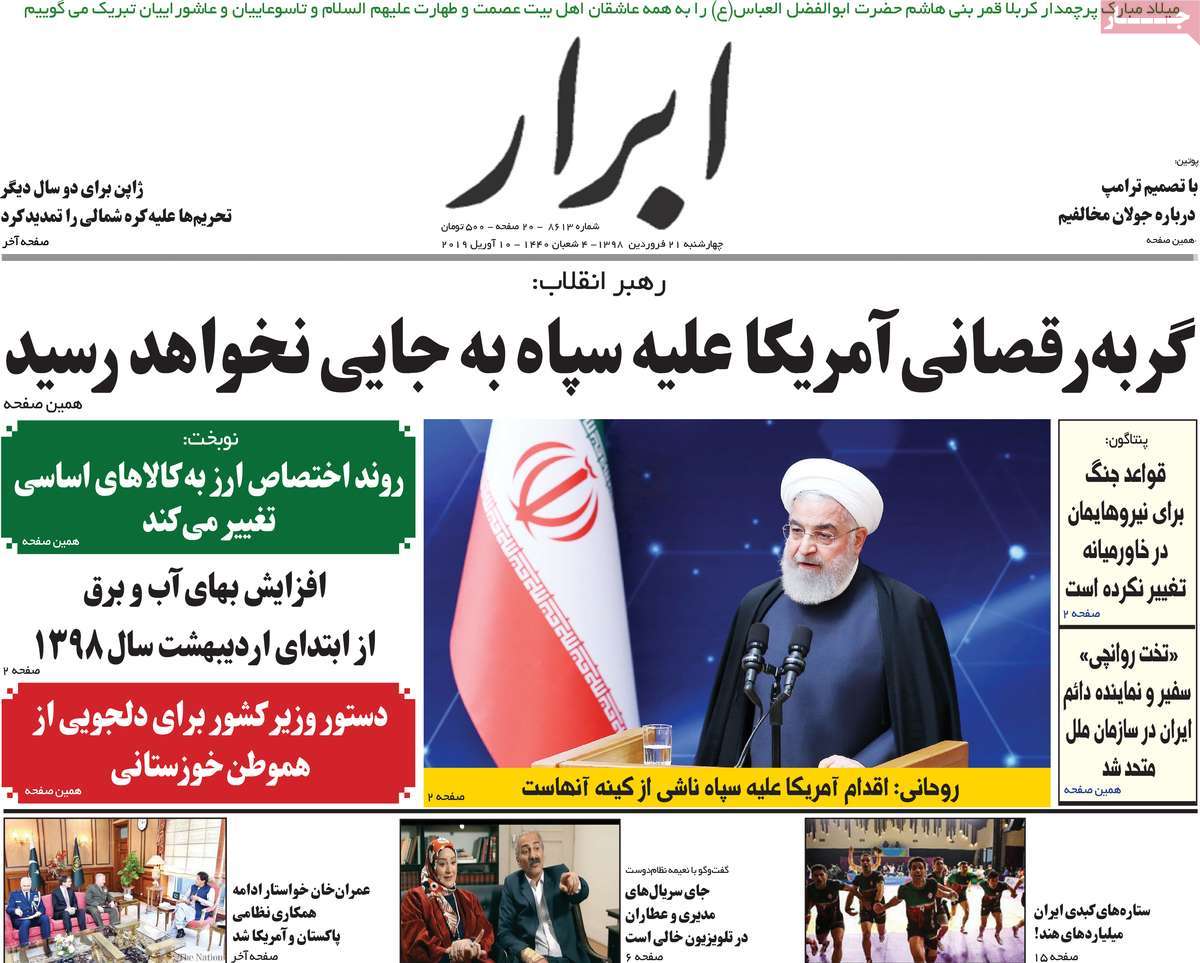 1- Rouhani: Our Patience towards Europe Not Out of Weakness

2- Iran Leader: US’ Move against IRGC Will Get Nowhere 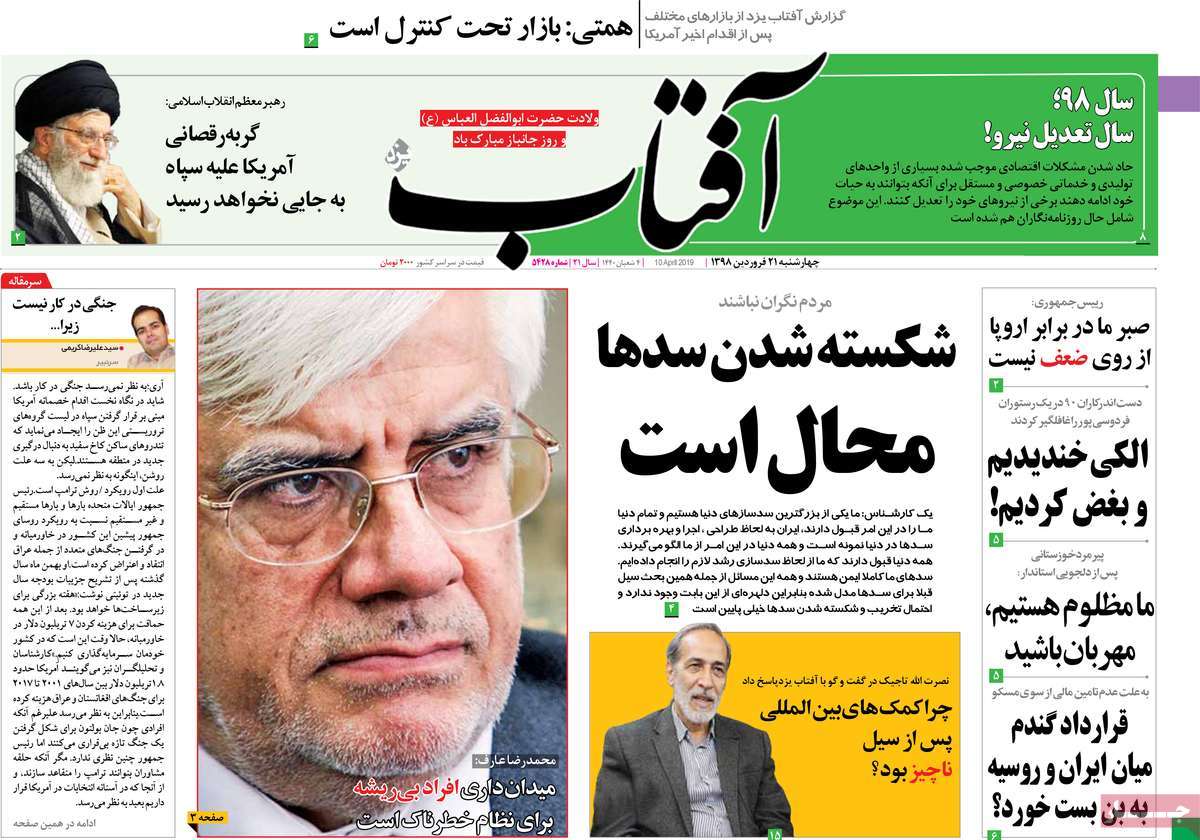 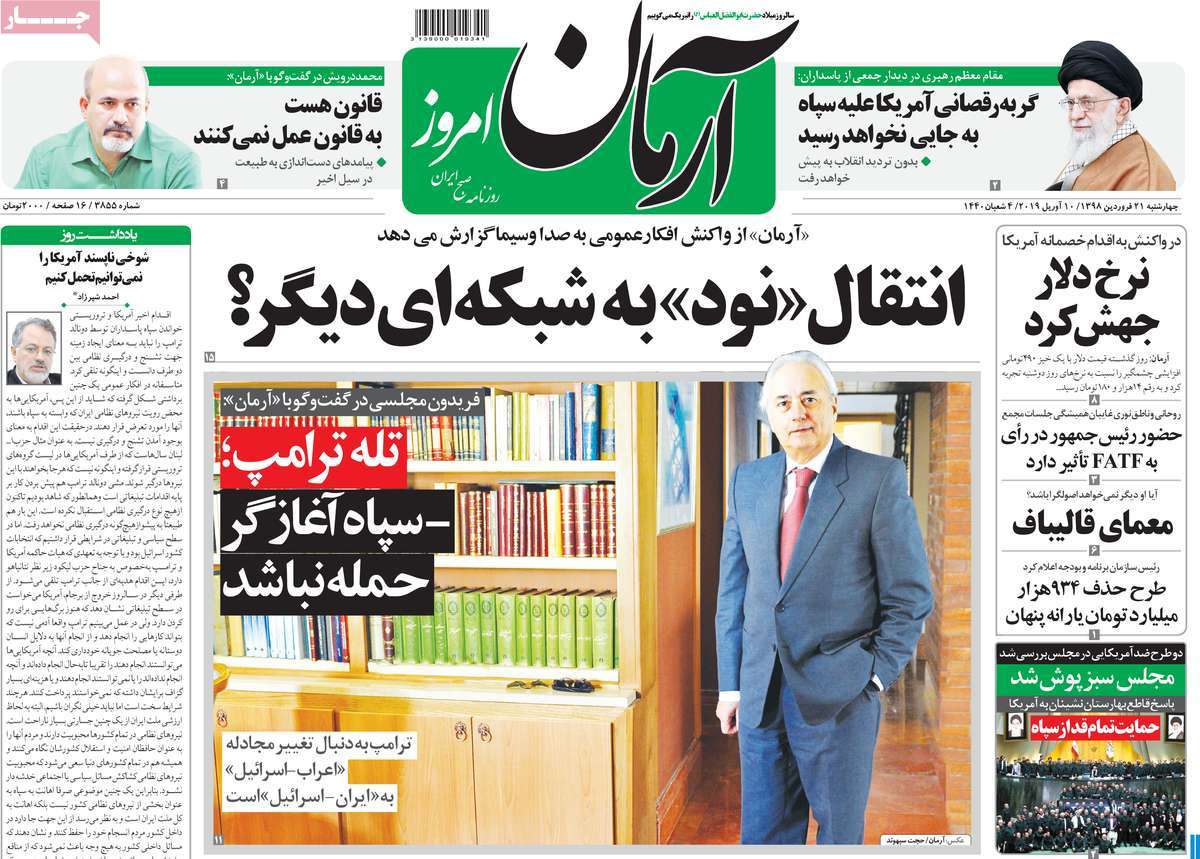 1- Trump-Netanyahu Give and Take for Israeli Elections

2- US’ Decision against IRGC Grabs Headlines across the World 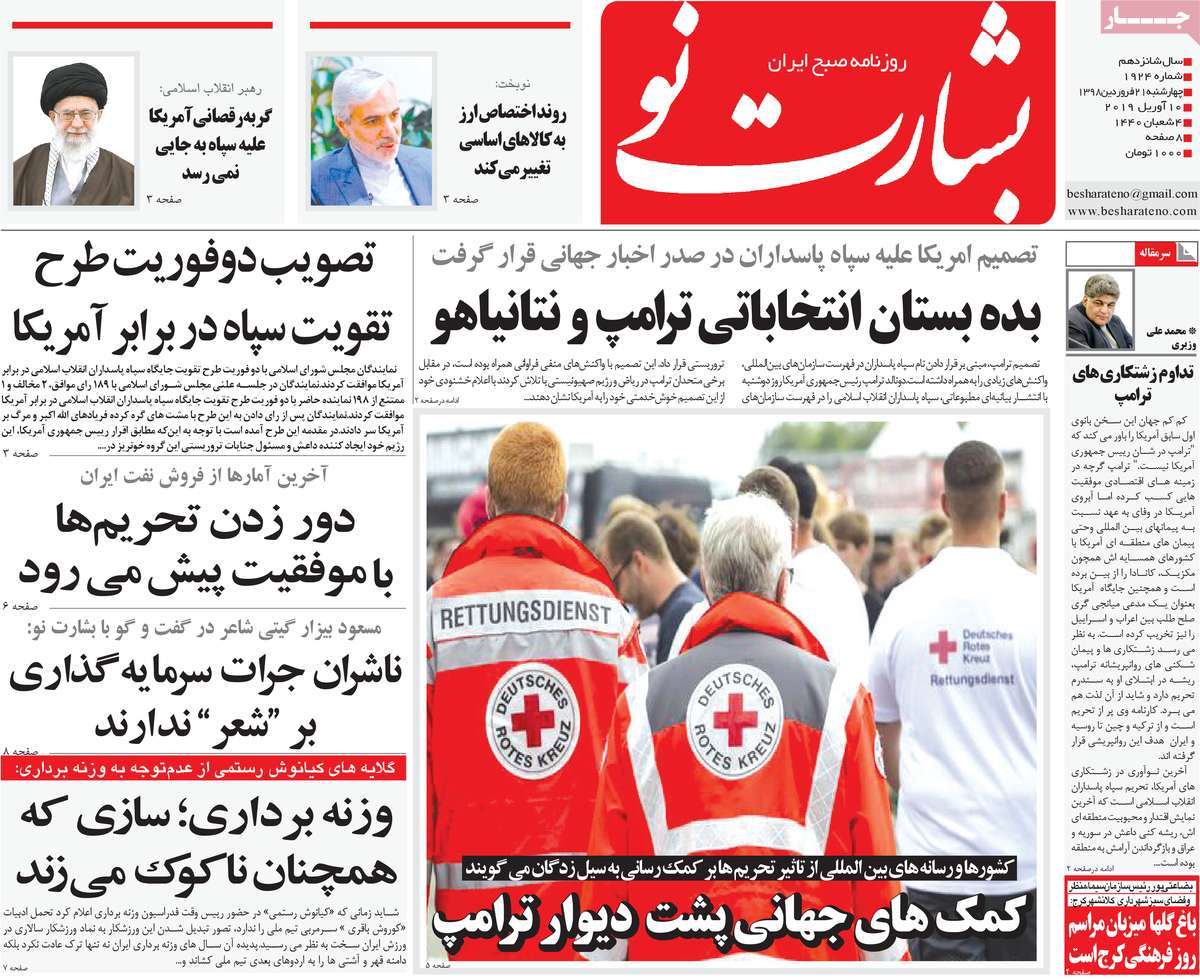 2- Erdogan in Decisive Dilemma: A Report on Consequences of AK Parti’s Defeat

3- Official: US Forces in Region Won’t Be Treated as Normal Soldiers Anymore 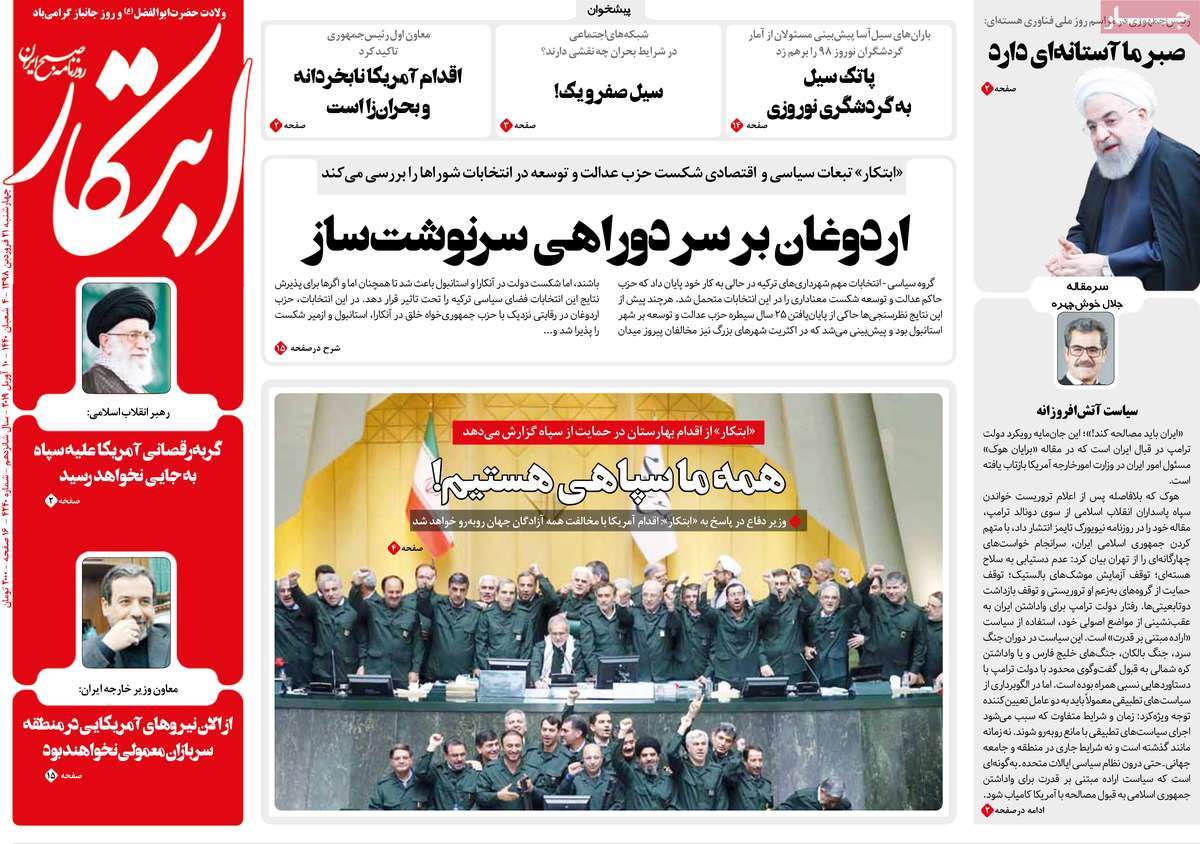 1- Rouhani: US Can’t Even Think of Our Defence Power

2- All Lawmakers in Iran Wear IRGC Uniforms at Parliament 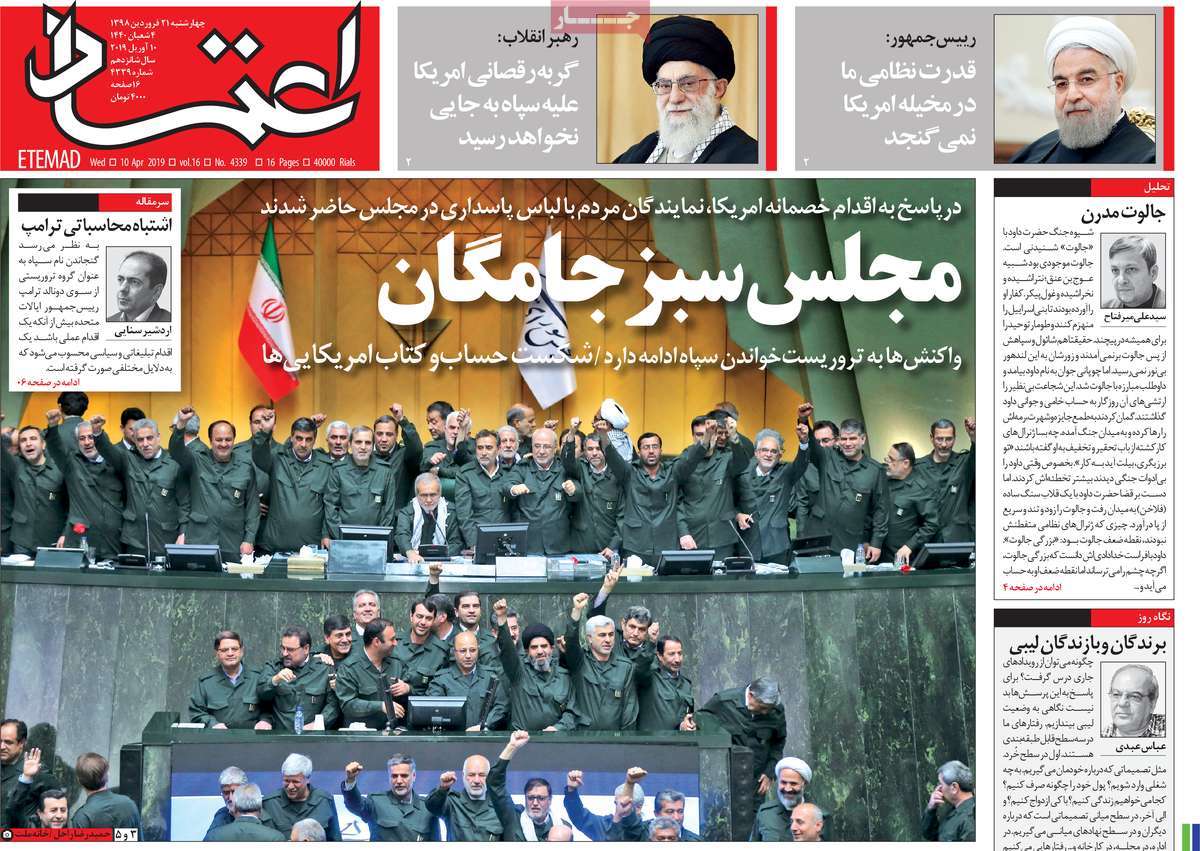 3- Iran Leader: US Wicked Move against IRGC Not to Get Anywhere 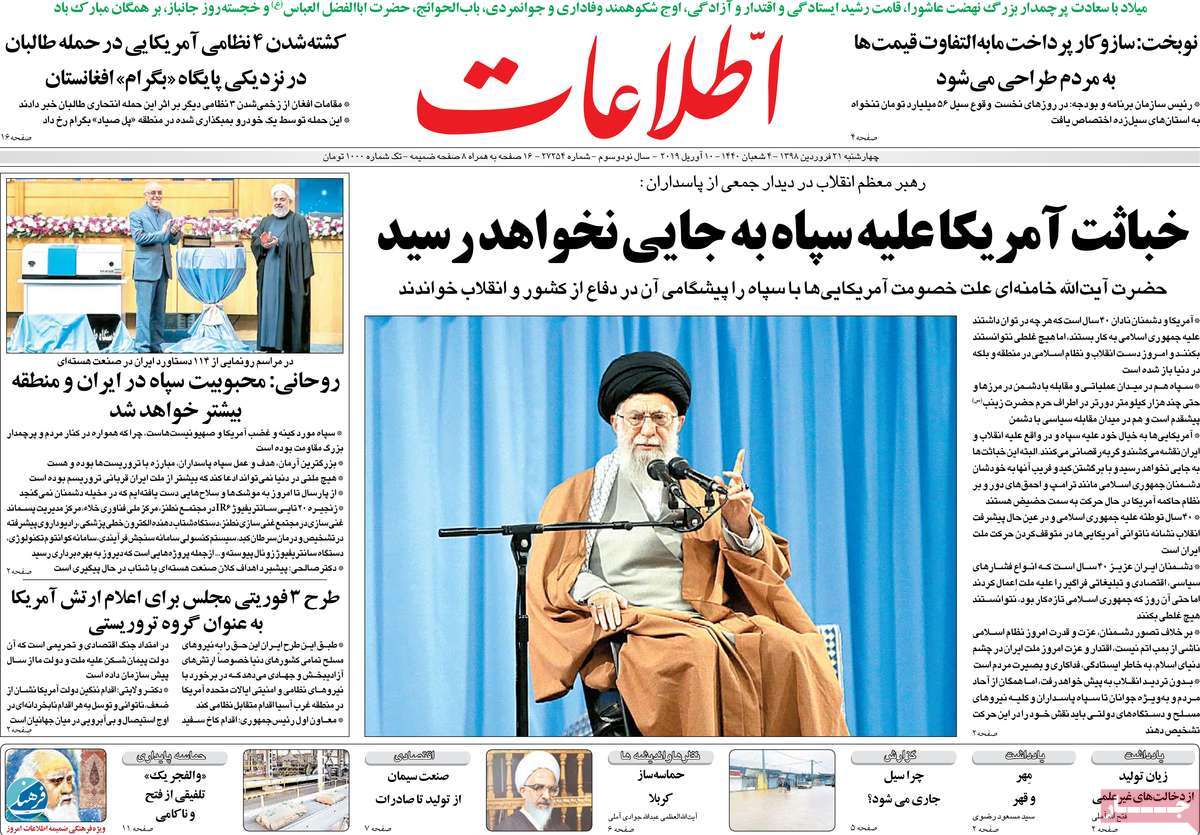 * IRGC to Get More Popular in Iran, Mideast Day by Day 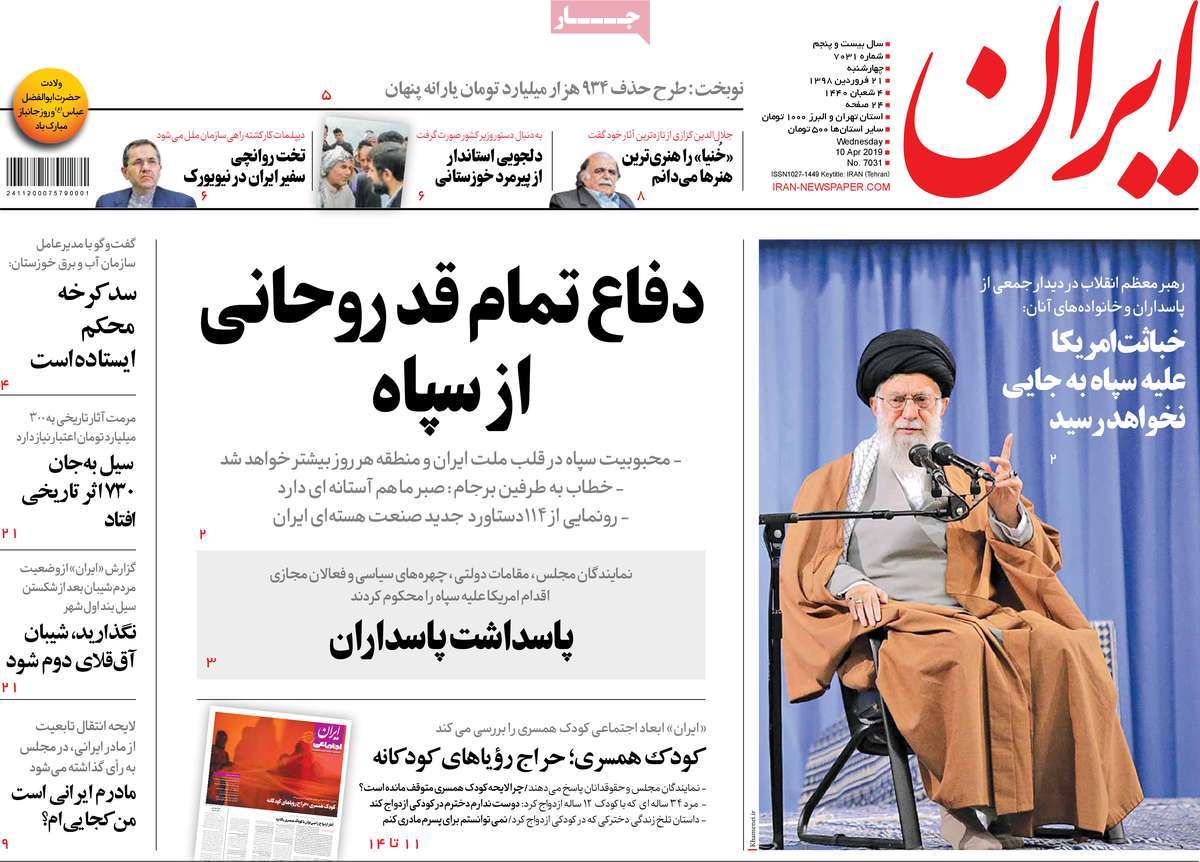 1- How Trump Harmed Himself? 4 Reasons Why US Decision Will Finally Harm US 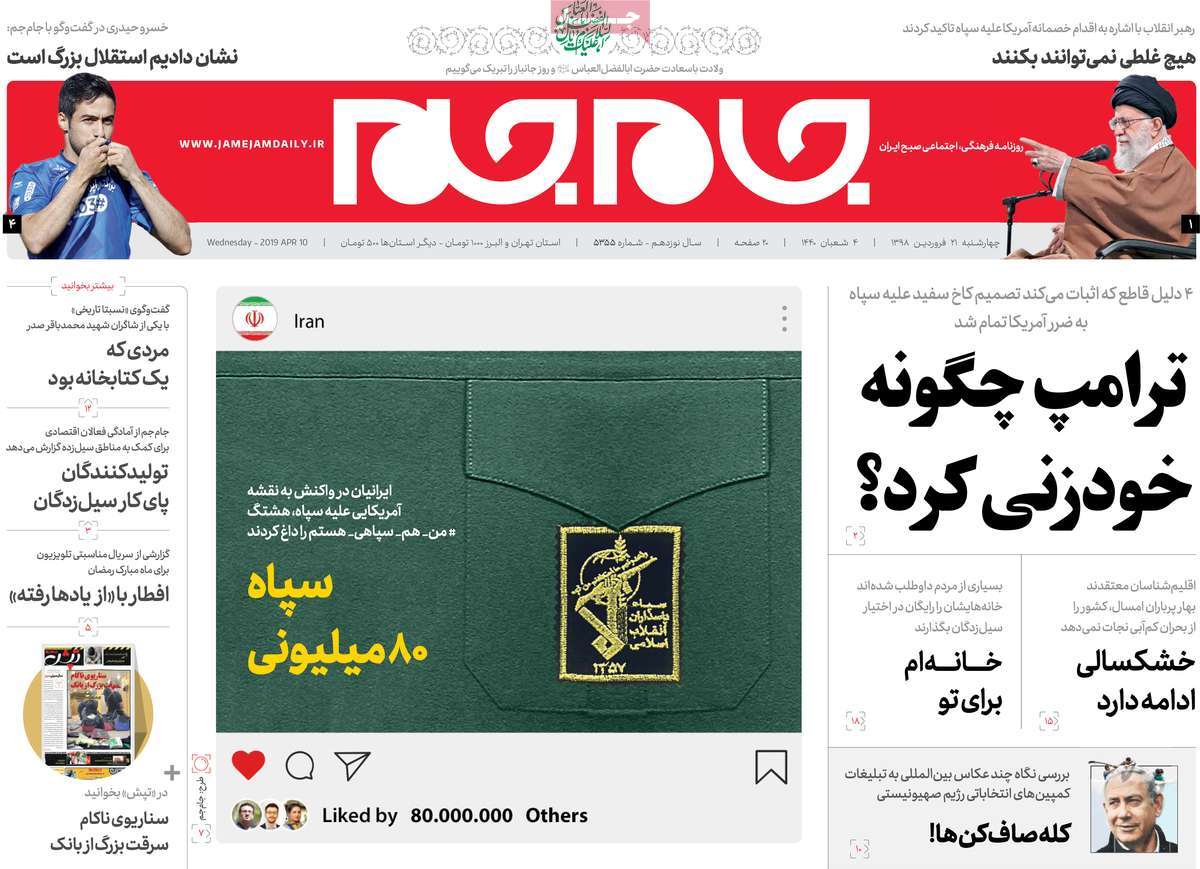 1- IRGC to Turn Persian Gulf into Graveyard of US Soldiers

2- How Much Serious Is Trump about His IRGC Decision?

3- New York Times: Thousands of US Soldiers in Danger after Trump’s Mistake 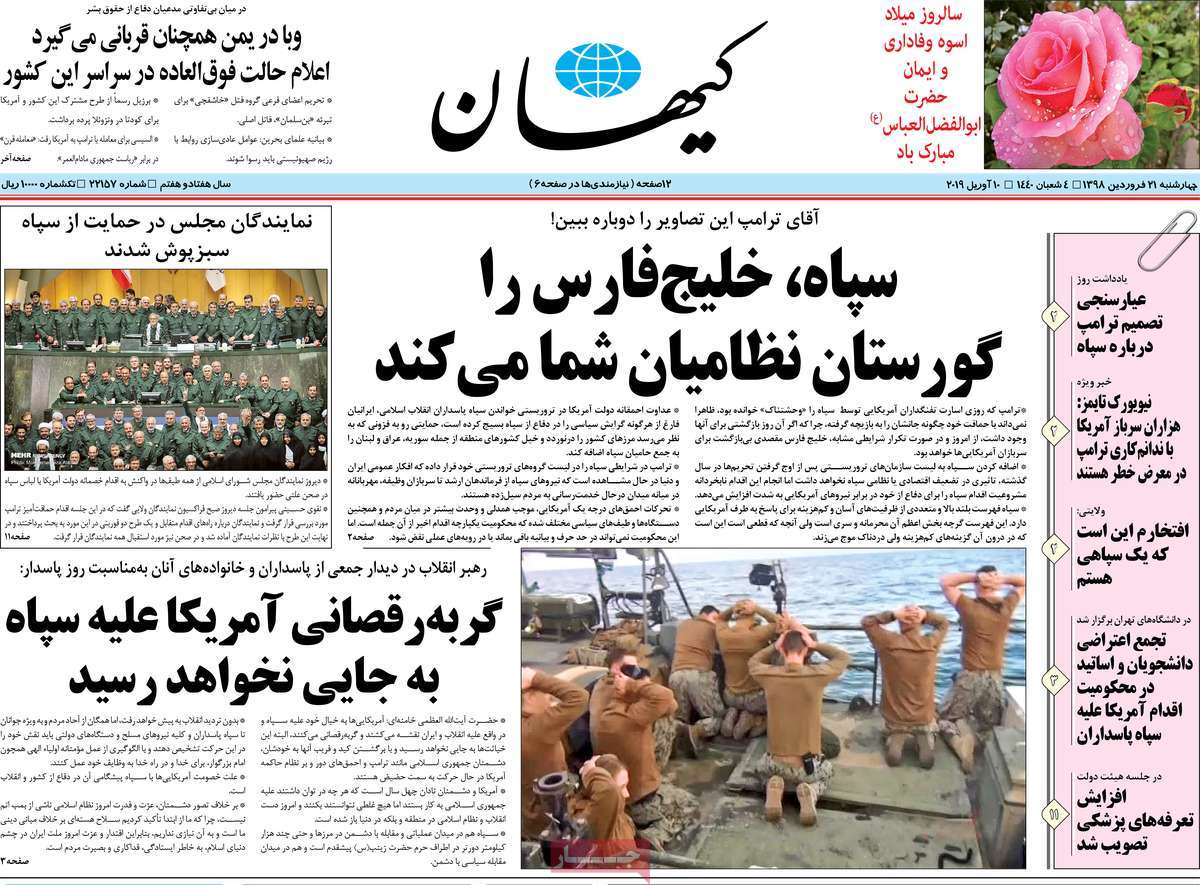 1- Division in US over IRGC: Defence Secretary Was against Trump’s Decision

2- Hope against Imperialism: Reformists, Conservatives Working on Bill against US

3- Iran Leader: US Will Get Nowhere with Such Moves 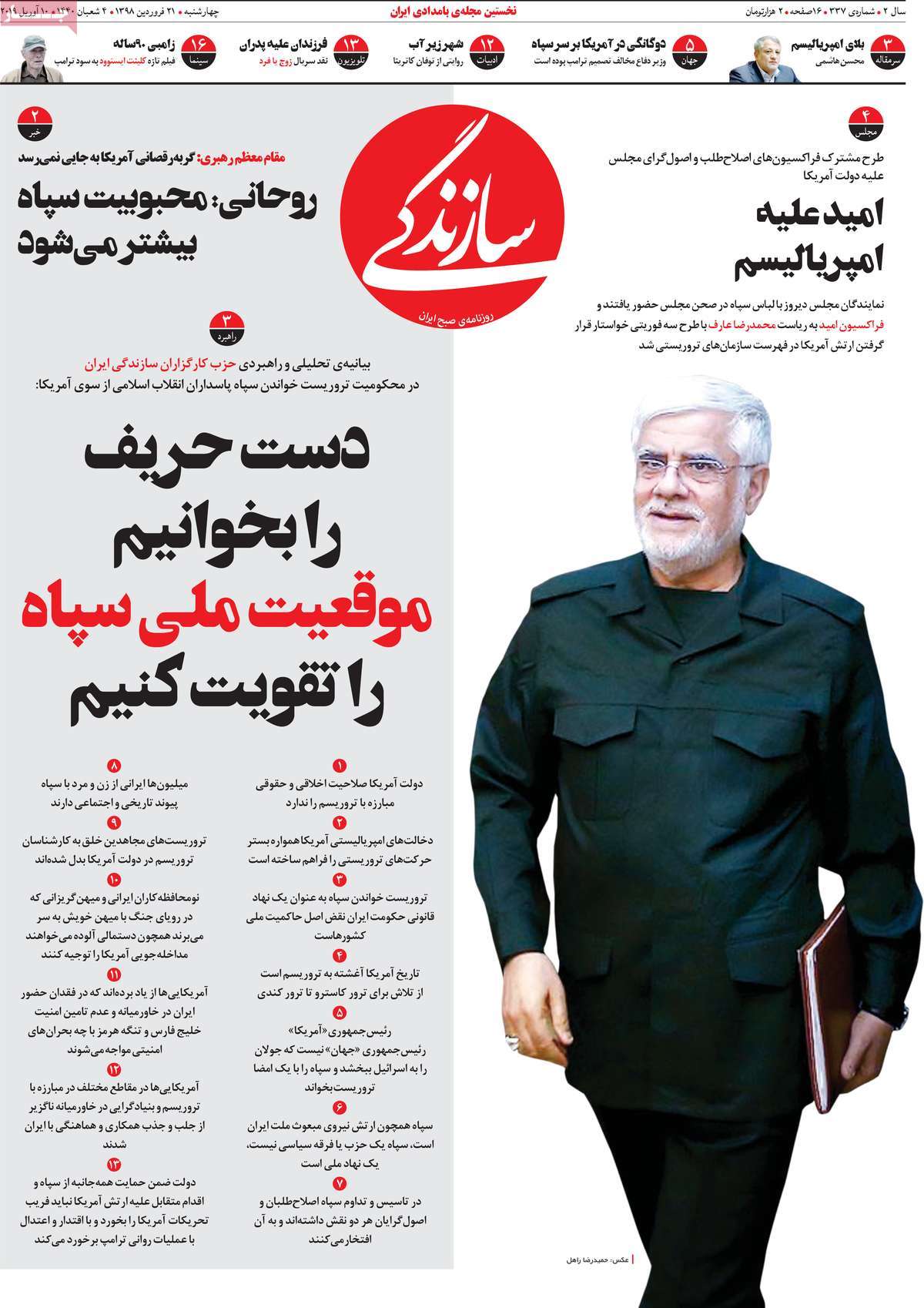 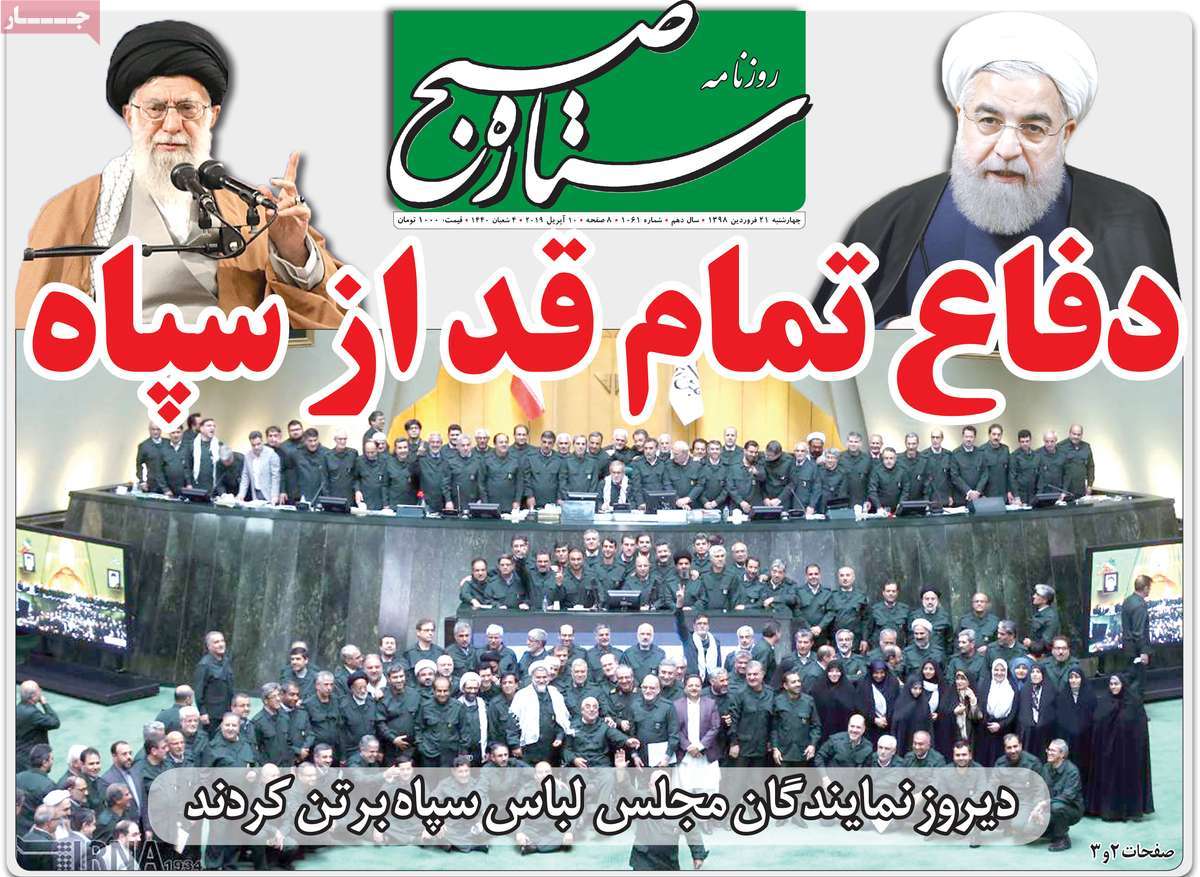 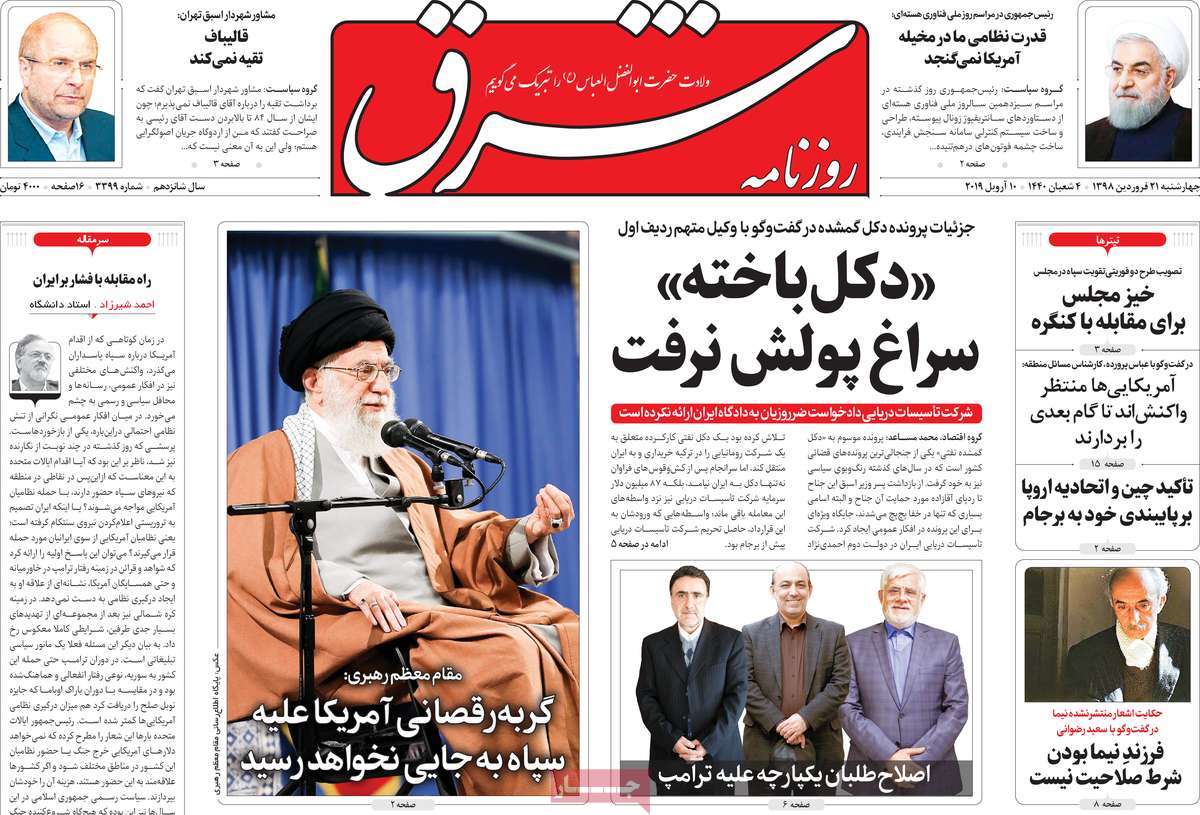