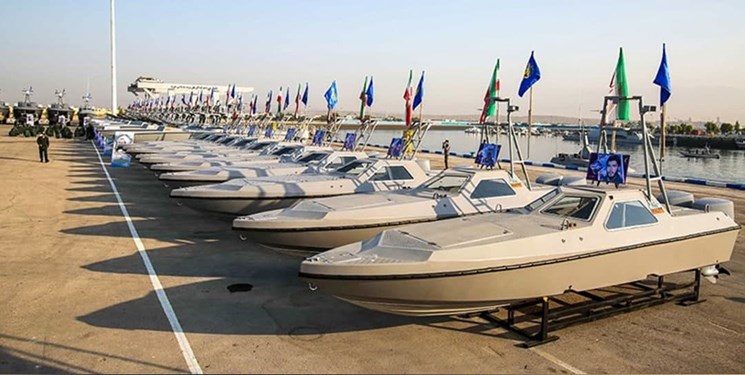 340 combat speedboats of various types have been delivered to the Naval Forces of the Islamic Revolution Guards Corps (IRGC) for operations in Iran’s southern waters.

The speedboats, which were delivered to the IRGC Navy in a Monday ceremony, are capable of carry and fire a wide range of missiles and rockets, and provide support for diving operations.

The speedboats will be used in operations in the Persian Gulf, Sea of Oman, and the Caspian Sea.
Addressing the Monday ceremony, IRGC Chief Commander Major General Hossein Salami said getting more powerful is the path chosen by the Islamic Republic, because “in today’s world, you should either be strong or surrender. There’s no third path.”
He said over the past 40 years, the enemies of Iran have lost their satanic splendour.
“The US no longer has the face of a dominant global power. It’s not anymore capable of advancing its desired policies wherever it wants. The driving forces of its power have been worn out by the Islamic Revolution, either in Iran or in other Islamic countries.”
He addressed American statesmen and said, “You have failed in the field of pressuring the Iranian nation. Don’t repeat your failed policies, and abandon the lens through which you were looking at the Iranian nation so far.”
Salami said Iran has overcome the US sanctions and its consequences, and has defeated its architects.
“What you’re seeing today was achieved in the time of sanctions,” he added.