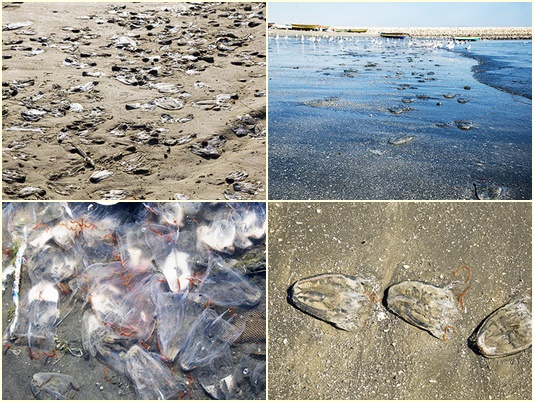 About 300 dead jellyfish were found in several locations on the coast of Jask, Hormozgan Province, southern Iran.

According to a Farsi report by ISNA, about 300 jellyfish were found dead in several parts of Jask coast.

“During this season, it is natural to find dead jellyfish,” said Afshin Asgari, Marine Officer of Hormozgan’s Department of Environment.

“Several experts of Environment Department, Hormozgan Fisheries Organisation, and Persian Gulf and Oman Sea Ecological Research Institute are studying the cause of death and mortality rate of jellyfish in Jask.”

“Mortality factors include water pollution, and the algal bloom as a result of increase in water temperature and minerals,” he added, noting that the jellyfish is very important to the marine lifecycle and nourishment.

Living in the average depths of the sea, theses jellyfish are 10 to 20cm in diameters. In Persian, the jellyfish is called “Aroos-e Daryayi” (marine bride) because of its beautiful umbrella-shaped, transparent and gelatinous body.