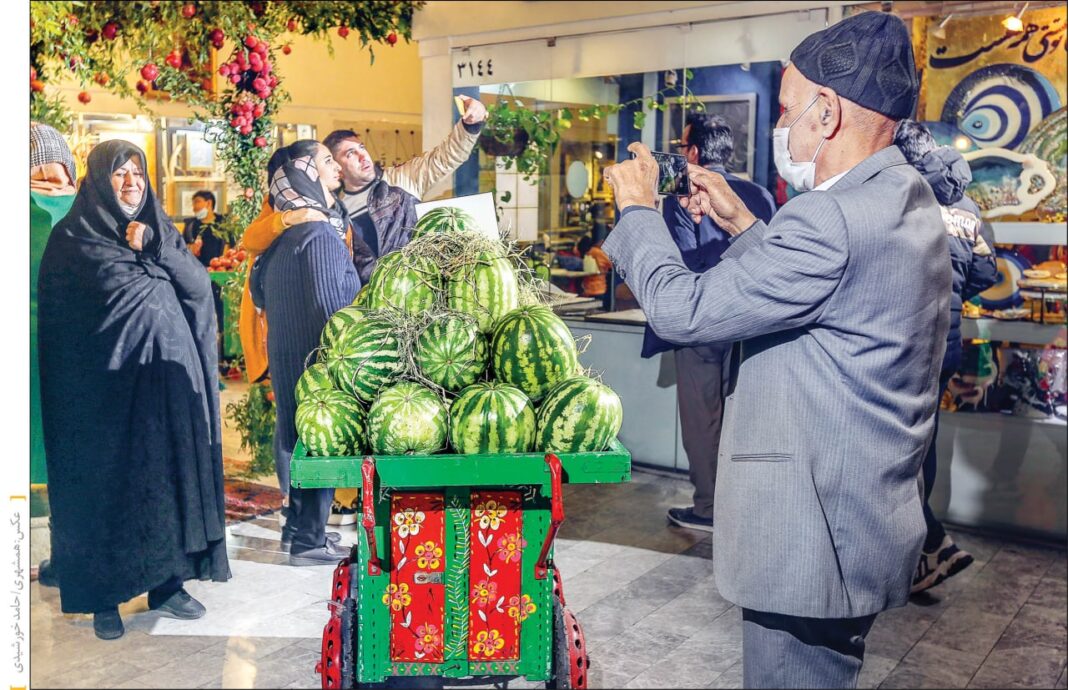 Yalda Night is a multi-thousand-year tradition which is commemorated by Iranian ethnicities from the north to the south to the east to the west of the country each year.

Yalda Night , the longest night of year, marks the last day of autumn and the beginning of the cold season. It is known as the lesser Chelleh or the fortieth day.

That’s when people warm their family gatherings by eating watermelons, dried nuts, all kinds of local foods and by playing group games. Over the past two years, the Covid pandemic affected the rituals of Iranians and forced people to hold feats apart. It looks like Iranians have to get along with virtual gatherings this year as well. According to The Tehran-based Hamshahri newspaper, the Covid map of Iran is now yellow and blue and more beautiful than the past two years. But over the past days, the Omicron strain of the Covid has reportedly made its way to Iran to remind people that this year again we have to be patient, hold virtual gatherings and read the rituals of our own city and other cities until we all get together next year in good health. 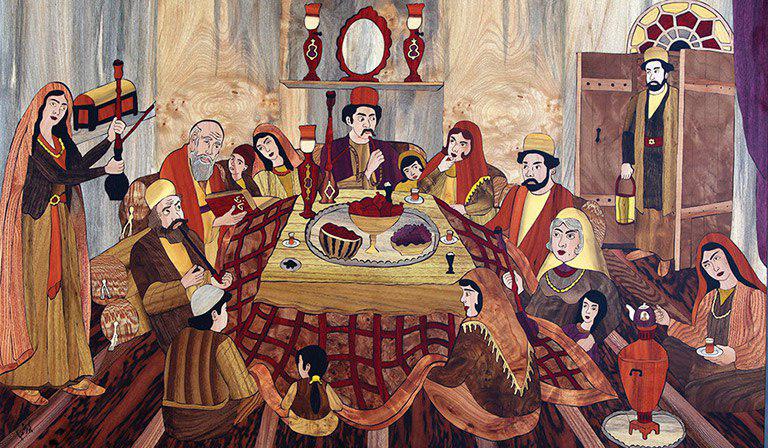 One of the most ancient traditions in West Azerbaijan Province on Chelleh Night is the holding of the Prophet Khedr Feast. On this night, ready-for-marriage youths would collect beans and, after cooking, would beat them with salt in the mortar. Each youth would put some 7 nails of the food under their tongues and would sleep. Their dreams would then be interpreted by the elder ones. Young girls would also cook āsh with the collected beans. The āsh woulf mean to untie the knot for them so they would marry.

People in Ardabil traditionally beseech the greater Chelleh Night to not be tough on them and they usually eat roasted wheat (Qorqa), watermelon, green, walnut, chickpeas and raisin. In the past, the grownups would become playmates of kids and they would play golyapuch (a traditional Iranian game). But such scenes are rare now.

Shawl-throwing was the most important ceremony observed on Yaldā  Night and it is still done by some families. The youngsters would send the shawl down through the hatch over the roof until late at night, and the housekeeper would tie food to it. Sometimes there was a message of apology or even courtship in these shawls.

Jafar Shahri writes in his book “Old Tehran”: “On the night of Yaldā , the people of Tehran welcomed guests with fresh fruits of autumn and dried fruits of summer and nuts, and they believed that Yaldā ‘s dinner dishes, such as Haftsin’s tableware, could cool hot nature and warm cold nature”. Among the hobbies of Tehran families is storytelling included the story of good and evil, the sange saboor (patient listener), the mahpishooni (beautiful girl), and so on.

Chaharmahal and Bakhtiari and Yalda Night

Baking a thick bread called gerdeh, in which blue beads are placed, is one of the rituals of the people of Chaharmahal and Bakhtiari. They distributed this bread among the family members and the person who had a blue bead in his piece of bread was introduced as a lucky person.

In addition to the traditional gatherings in Iran, the ceremony of foam mixing and the fortieth night of new grooms is one of the special customs of the people of South Khorasan, which is performed on the night of Challeh. At the ceremony, family members gather on the night of Yaldā , and in cold weather, they mix the foam, which is a kind of local dessert similar to ice cream, until it foams, and then they eat it. During the ceremony, new grooms go to visit the new bride with different gifts like nuts and sweets.

The people of Khuzestan wait until dawn to welcome the legendary Qarun. Qarun brings pieces of wood in wood-breaking clothes for poor families. The wood turns to gold, bringing wealth and blessings to the family. Shahnameh reading, poetry reading and breaking hazelnuts on Yaldā Night are other rituals of the longest night of the year in thise.

In ancient times, the people of Zanjan on the night of Yaldā , placed a container of halva and qavut on the ledge behind the window and placed a beautiful vase full of flowers and a mirror next to it, and they believed that the Prophet Khezr would come to their house at night to eat halva and qavut. When dawn broke, if they saw a fingerprint on a food, they considered it a sign that their needs were being met.

In addition to reading Shahnameh and reciting poetry from the Shirin and Farhad love story, other customs of sacrificing in Kazerun, making vegetable seeds, rice milk in Marvdāsht, cooking komach (a kind of sweet) in Darab and Āsh Doogh in Firoozabad are some of the customs of the people of Fars province on Yaldā Night.

A few months before Chelleh Night, the people of the capital city of Sanandaj put small melons brought from the village of Sarab Qamish in vinegar pulp to make Kalektorsh which is one of the main items on the table, for this night. The food of this night is usually a mixture of grape tree leaves and cabbage, which the meat is placed between each one.

The people of Kermanshah eat fruits on this night which are a symbol of the sun; Such as red watermelon, red pomegranate, red apple or yellow lemon. They also tell stories of the eternal love of Shirin and Farhad, Rostam and Sohrab, the story of Hussein Kurd Shabestari and the recitation of beautiful and pleasant poems by Shami Kermanshahi. 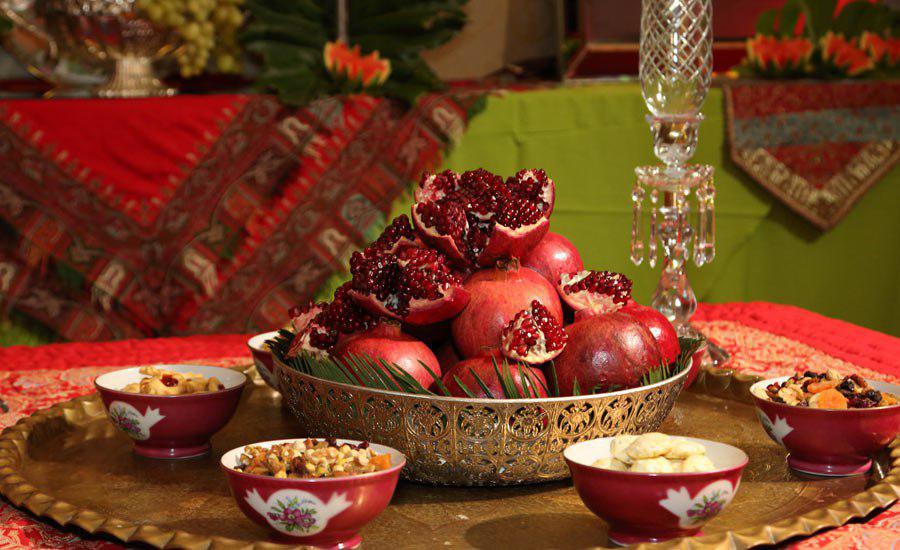 On this night, like what was done by their ancestors, the Kermanis gather on the Yaldā  Night in the big house of each family, spread a tablecloth on pateh on a Kerman rug, and place the poshtis adorned with pateh around the room. In the middle of the table, they put a dish of pistachios, watermelon, black pomegranates from the surrounding villages, kalempe (traditional sweet of Kerman), qovatu coffee and other snacks.

In some parts of Gilan, it is believed that all the waters of the world close and freeze at an indefinite moment in this night, and whoever realizes that moment, he will be granted whatever he intends and asks God for. Some also believe that on this night, the trees lower their heads and at this moment, if a person wakes up, whatever his intention is, his wish will be granted.

On this night, Yazidis have a special dish called Āsh-e-Shouli, which is still popular in families and they make a plan to cook it, and on Yaldā Night, the fragrance of this local food can be smelled in homes. Another custom of the night is to light a fire.