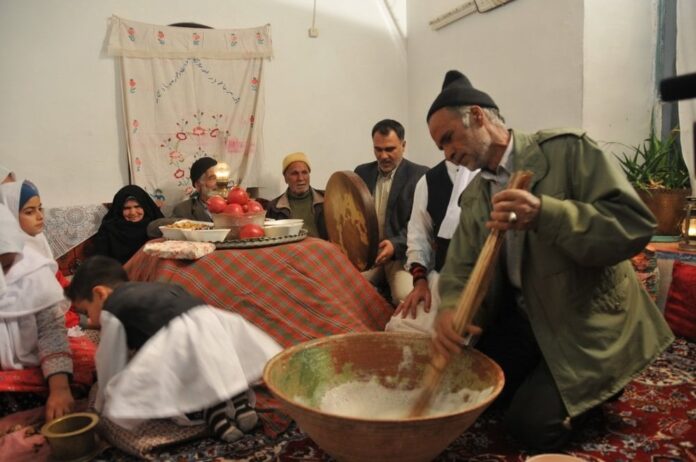 The Iranian people living in desert areas of South Khorasan Province in eastern Iran mark the Yalda Night, the longest night of the year and the winter solstice, by holding various rituals like cooking special dishes and sweets.

Iranian people across the country come together on the eve of winter to mark Yalda Night as the longest and darkest night of the year.

Iranian families use the Yalda Night as a chance to come together and spend longer hours with each other while marking an ancient tradition.

People of South Khorasan have been celebrating the night since a long time ago with rituals which are still alive today.

Visiting relatives to strengthen family relationships is among the main features of Yalda Night among those living in the desert.

Most of the relatives come together in the house of the family’s elder member during the Yalda Night spending the long hours of the night by eating various sweets, nuts and fruits.

Playing traditional games like Gol Ya Pooch, narrating traditional stories, and reciting poems by legendary poet Hafez are among other rituals observed during the night.

Kafzani ritual is observed by most families of the province during the Yalda Night. Kaf is a type of local sweet or syrup like icecream. To prepare Kaf, the relatives first boil the roots of a special plant in the water and then put them in a large dish after having them cooled down.

Then they add a material called Gaz and blend them until the dish is filled with foam. The blending keeps going on until the foam becomes thick. Then it is served in small dishes garnished by almond or pistachio. It is served as one of the most delicious dishes in the province.

During Yalda Night, the grooms’ families take gifts to their bride’s home. Recently engaged girls receive special gifts from their groom’s family. During the night, the two sides families come together to spend the night. The gifts are usually accompanied by a tray filled with various nuts and fruits as a sign of promise by the groom to the bride to provide her with a good life in the future. 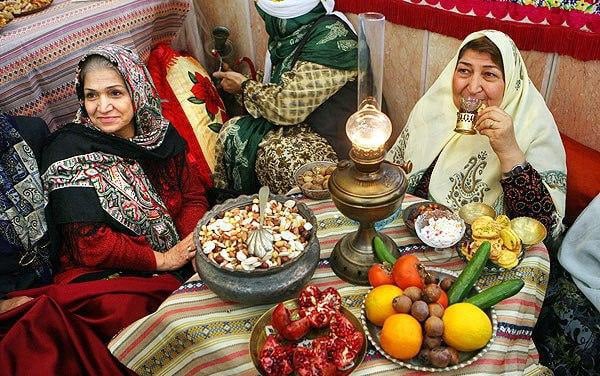 Among other rituals of Yalda Night in South Khorasan province particularly in the rural areas one can refer to buying sheep months before the night and fattening them to be used in the nights’ special dishes.

The sheep are beheaded one day before Yalda Night and their meat are cut into small pieces. They are boiled and fayed in a special dish and then served with local breads.

South Khorasan’s Yalda Night ceremony was registered as a national heritage of Iran back in 2012.