World’s Largest Inlaid Frame to Be Unveiled Next Summer 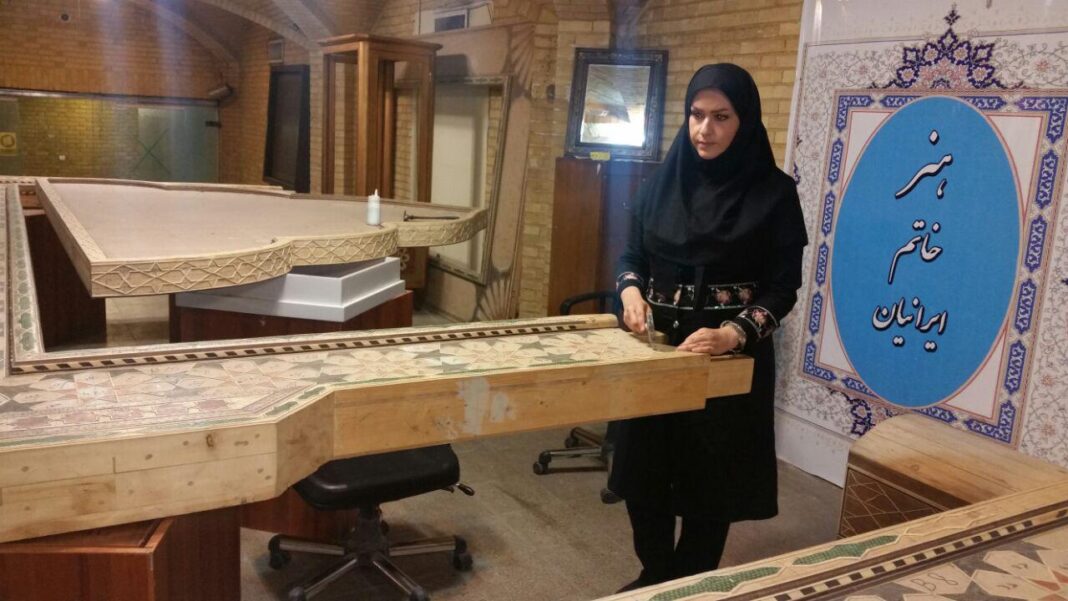 An Iranian handicrafts artisan says the construction of the world's largest Khatam (Inlaid work) frame will be finished in the summer of 2018.

The Iranian inlaying craftswoman, Maliheh Fakhreddin, in a Farsi interview with IRNA has talked about the characteristics of the world’s largest Khatam frame, which is under construction at the moment.

“The frame is 7 by 8.4 metres, weighing more than 2 tonnes, and will be introduced to be registered in the Guinness Book of Records after the completion,” she added.

According to Fakhreddin, the knitting process of this inlaid frame has been completed, and it will be ornamented with marquetry, wood-carving and turquoise-laying as well.

“I believe that Khatam is the end of all arts, and the creativity and elegance of this art is not comparable to any other one,” she went on to say.

This artisan also emphasized that although art of crafting Khatam is common in countries like India, the Khatam made in the Iranian south-central city of Shiraz is very high-quality and incomparable to foreign and even domestic samples.

“The difference between Shiraz’s Khatam and other domestic Khatams is that camel or cow bones and bronze are used in it while in other types plastic fibres are used instead of bone, and bronze metal is rarely used. Moreover, they use liquid adhesive instead of wood glue.”

The Iranian craftswoman added that the theme of this frame is to pay homage to the four greatest women of the world, i.e. (Hazrat Fatima Zahra (SA) (daughter of Prophet Muhammad), Saint Mary (mother of Jesus), Hazrat Asiyah (wife of the Pharaoh) and Hazrat Khadijeh (SA) (wife of Prophet Muhammad).

“In this project, whose idea was set forth by Hadi Chabok, we tried to put Hazrat Fatima Zahra (SA) at the centre of the frame, and the name of three other great women are placed inside this central frame,” she noted.

“We’ve done our best to create an international work having elements from different religions. Therefore, there are lines and texts in the form of scriptures of the holy Quran, Gospels and the Torah. The texts are in Persian, Arabic, English and Hebrew and they are placed on frames by art of marquetry.”

Fakhreddin also pointed out that the work on this inlaid frame began in 2016 and it would be completed by the summer of 2018.