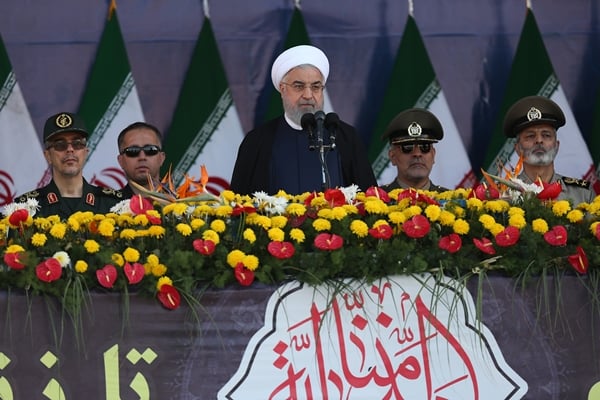 Iranian President Hassan Rouhani says today the international community from the east to the west has stood behind the Islamic Republic against US President Donald Trump.

In an address to a ceremony marking the Sacred Defence Week in Iran, he referred to the economic and psychological war launched by the US against Iran and said the fate of the war for Iran is undoubtedly sweeter than that of the war imposed on the country by the former Iraqi dictator Saddam Hussein.

Rouhani added today, 38 years after Saddam’s aggression against Iran, a similar aggression is being repeated once again against the country, this time by the US.

He noted that the war on Iran by Iraq was imposed simply because Saddam thought that the 1975 treaty was not in his and Iraq’s interests.

Although a lot of time had been put into the treaty and Saddam had signed it himself, he decided to violate it and began its unjust war on the Islamic Republic.

Iranian president underlined that the US which doesn’t respect any international treaties has once again violated its pledges under a multi-national agreement confirmed by the United Nations Security Council.

Rouhani also said today there is no proxy war between the US and Iran adding the US is standing against Iran directly, violating its commitments.

“It was first the US which pulled out of a multinational treaty and upset our nation,” he added.

According to Rouhani, Saddam formally withdrew from 1975 treaty with Iran but his real intention was to destroy the Islamic Revolution and Republic.

“Today, Trump has also formally left the JCPOA, and his main goal is to inflict a blow on the Islamic establishment.”

President Rouhani underlined that Iran managed to retake its occupied lands from the aggressors. “At the end of the day, the UN and the UNSC recognized Saddam as the initiator of war and many states which put their weight behind him expressed regret and confessed to their complicity in Saddam’s crimes against our nation.”

Rouhani also said the same story is to unfold for Trump. “Lots of plots have been hatched over the past two years to force us to leave the Iran nuclear deal but we managed to thwart them by patience and prudence.”

The Iranian president then said Trump was seeking to take Iran’s nuclear program to the UNSC and there condemn the country unanimously. “But except for two hated regimes in the region, no other states support the US. We have already filed a complaint at The Hague over US violations of the JCPOA.”

He then expressed hope that the Islamic Republic could pass behind the current difficult conditions created due to the US sanctions, saying the mission is possible through unity.