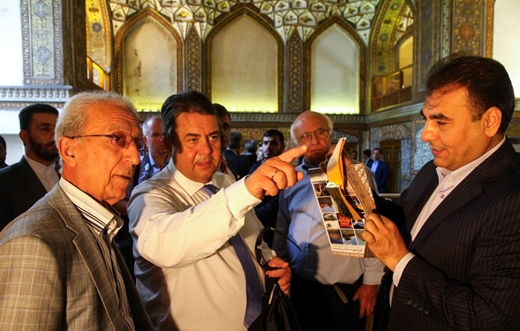 Professor Majid Samii has said that the stage has been set for Iran and Germany to work together, and that Iran has the capacity to make scientific and economic progress.

Professor Majid Samii, a distinguished Iranian neurosurgeon and medical scientist, says his trip to Iran in the company of German Vice-Chancellor Sigmar Gabriel is not for economic or political purposes, stressing that he is in Iran only to boost friendship between the two nations.

The Iranian scientist – who is the head of the world renowned International Neuroscience Institute (INI) based in Hanover – said this to reporters on Tuesday and added that it was the vice-chancellor’s idea that he accompany the German delegation to Iran. Fararu.com on July 21 released a report on his remarks. The following is the translation of what else Prof. Samii told reporters:

Professor Samii said, “The German people treat me with respect. The Iranians too show a feeling of friendship and devotion to me. It was the idea of the German vice-chancellor that I accompany him in his trip to Iran and signal this message to the Iranian nation that a new chapter of relations will open for the two countries”.

The renowned Iranian neurosurgeon went on to say, “I act as the ambassador of both Iran and Germany. Personally, I have no economic and political links with Iran. I have not made and will not make any political statement”.

He further said that the stage has been set for Iran and Germany to work together, adding that Iran has the capacity to make scientific and economic progress. He also said Iran’s cooperation with the German government will certainly produce positive results on scientific and medical fronts.

He added that the Germans and Iranians have so far been unaware of their potential, but the two countries got closer thanks to joint scientific and industrial projects they have undertaken.

“I view myself a resident of Isfahan. Our half-day trip to Isfahan revolves around sight-seeing and a meeting with the governor general before we head back to Germany,” said Prof. Samii.

“The German vice-chancellor, who is a friend of mine, asked me to accompany him on his Iran visit. The trip will also take us to Isfahan where we seek to see Iran’s historic and artistic works and their antiquity [firsthand].

“These companies are seeking to immediately transfer their technology to Iran. They do not look at Iran as a consumer; rather, they seek to establish cooperation with Iran,” he added.

The Iranian scientist also said that the high-ranking German team has now learned about the intelligence of the Iranians and they now believe that Iran can make scientific and industrial progress like Germany.

He said that Iran’s biggest neurology center, which is being constructed in Tehran, will become operational next year (in spring). […]