When diplomacy serves the cause of development (PART ONE) 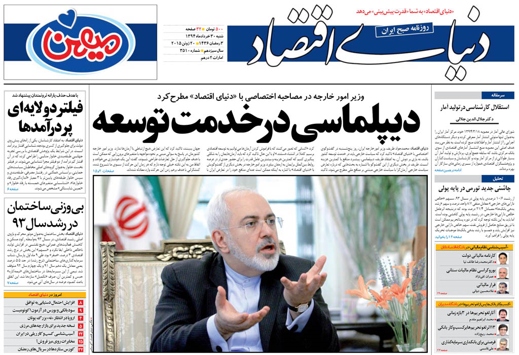 Foreign Minister Mohammad Javad Zarif has said Iran can reach development by standing on its own two feet, but that does not mean it should sever ties with the rest of the world.

“Diplomacy is the art of advancing a country’s interests at the lowest cost. Foreign policy should serve the cause of development, rather than being a burden on a country’s development drive,” he said. The following is PART ONE of the translation of the interview:

The president said in a first conference on Iran’s economy that the economy has provided the politics with subsidies to date and today we should do something to direct the subsidies from politics to economy. You said in your confirmation hearing in parliament that foreign policy should be in line with [the country’s] economic interests. Given that you are the very first extremely professional person to have taken over the Foreign Ministry, how much do you think the eleventh government’s foreign policy can serve such a purpose and how much it can be effective when it comes to politics helping the economy? Concerning the talks, how much is it likely for Iran to lead a foreign policy that contributes to its economy?

An important thing that should be taken into account is that basically there is no one-dimensional issue in human relations. Everything stems from a series of actions and reactions which should all be taken into consideration from a broad perspective. That’s why I do not believe that politics should be either Eastern-leaning or Western-leaning. I think this comes from misunderstanding the politics.

To answer that question, one needs to define diplomacy first. Diplomacy is the advancement of interests on as little cost as possible. It is not an art to spend too much. In other words, spending a lot and reaping benefits would not be remarkable.

The Supreme Leader said in a gathering of [Iran’s] ambassadors and chargé d’ affaires last year, “There may be very powerful governments which push their agenda through diplomacy, not through military means” because the tools of diplomacy are less costly with less pressure exerted on people.

But if that happens, I think we cannot be an identity to set our goals and then try to achieve them. If that happens, we will turn into a good-for-nothing and ineffective entity on the world stage and will lose our levers of power.

Those who think we can have economic development by ignoring the ideals are in the wrong. But the pursuit of those ideals – in a way that is less costly and provides us with the more power to wield more influence and have a stronger presence [in the international community] – translates into a comprehensive foreign policy which is at the service of development as it helps us not to forget our objectives and ideals.

Iran is viewed as an anti-hegemonic country in international relations. That Iran is an anti-hegemonic player imposes huge costs on the country. Over the past decades, especially during the eight years of Mr. Ahmadinejad’s presidency, Iran’s anti-hegemonic stature was highlighted. China once decided to include economy as a strategic – no tactical – topic in its foreign policy. The question that arises here is: when is economy supposed to be included in Iran’s foreign policy as a strategic issue?

During the revolution era, we were always an anti-hegemonic player, but it is not good reason for the country’s economy to sustain costs. You are a player in an equation in the international community, I mean in an atmosphere which you have to turn into a balanced situation. If you go and put all your eggs in one basket – like what [Boris] Yeltsin did in the Russian Federation – you will gain nothing.

You will lead nowhere if you lose your identity or turn into a player that is in full compliance with the existing system and order. China, too, is following a detailed planning and it has not discarded its stance, objectives and ideals.

Unfortunately, the Islamic Republic left behind eight years during which the declared, not real policies were carried out in a way that threw obstacles in the way of development and caused the country to pay a price.

This should not make us think that by living up to the ideals, or maintaining ideal priorities and revolutionary tendencies, we cannot secure development. I think we can reach development. Standing on our own two feet is the only way which can help us reach sustainable and reliable development, a sort of development which does not make us collapse from the peak of power to the precipice of debasement once we encounter a small change in the world. Of course, to stand on our own two feet does not mean we should sever ties with the rest of the world; however, it means we should establish ties with the world based on our own identity.

The Supreme Leader has repeatedly said that a country which seeks to stand on its own two feet in the international system should pay a dear price. I believe you can stay longer on the world stage if you stand on your own two feet and stick to your principles and values.

It is also the case when it comes to a resistance-based economy. Such an economy will help the country sustain slighter loss at an international level. We should not use the eight years of the previous government – during which we witnessed several developments unfolding [in the country] – as a model. I do not want to paint a black picture of the time in which I had no role to play and was the target of the government’s compassion [a sarcastic reference to Ahmadinejad’s administration which described itself as a compassionate administration but sidelined everyone who was a bit critical of its policies].

Back to the eight-year presidency of Ahmadinejad; ever since the Islamic Revolution thanks to our country’s anti-hegemonic stance, rejection of some international norms has been one of the hallmarks of our foreign policy. Are the nuclear talks expected to produce a change in our foreign policy? Will economy replace opposition to hegemony as the number-one priority of our foreign policy?

Efforts to set priorities in a way that pits national interests and ideals against each other have their roots in an erroneous foundation. Such misconception is based on the mindset of former US Secretary of State Henry Kissinger who has said Tehran can be a reliable player only if it chooses between an idealist Iran and a nationalist Iran.

In light of the fact that I was personally involved in a debate with Kissinger on this, one of his students posed the very same question to me. I give you the same answer I gave him. ‘Whenever the US can draw a distinction between an idealist US and a nationalist US, it can expect others to do the same thing.’

In the absence of ideals, no country can have a powerful presence on the international stage. At best, they can have a say in issues which are not very important. Such countries cannot be major regional and international players.

As far as the nuclear question is concerned, if our presence is in line with our national interests and ideals in a way that deprives ill-wishers of the opportunity to paint a picture of the revolution that poses a security threat, we will be able to stick to our identity and serve our economic interests at the same time.

Willingness to let go of our identity might help us secure some short-term economic interests. But these interests will be anything but sustainable and won’t help us create a special position for the country to advance in the long run.

In other words, we need to take a serious look at international relations, economy, as well as national and regional status to be able to be a serious actor whose foreign policy serves the cause of development.