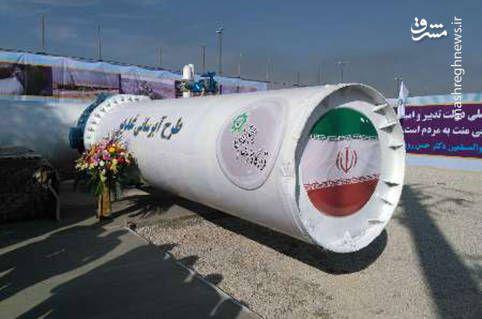 The Ghadir II water transfer project came on line tonight in a ceremony attended by Energy Minister Reza Ardakanian, the commander of the Khatam al-Anbia Construction Base and provincial officials.

The project became operational ahead of schedule, media reports say.

With Phase II of the project entering service, good-quality tap water will be pumped to the cities of Abadan, Khorramshahr and Shadegan.

The project was mainly implemented by the Khatam al-Anbia Construction Base and received special attention from several state bodies and senior officials including the Friday prayers Imam of Khorramshahr who personally oversaw the project.

A few hours before the inauguration ceremony, the Leader of Iran’s Islamic Revolution Ayatollah Seyyed Ali Khamenei in a letter thanked Mousavifard for closely following up the project and even symbolically helping the welders.

Some had attributed the low quality of water to alleged sales of water by Iran to Kuwait and Iraq. However, Iran’s Energy Minister Ardakanian made it clear that the country has no plan or decision to export water to other states.

“The [Iranian] Energy Ministry has no plans, decision or projects to transfer, sell and export even a single drop of this territory’s water to any country beyond the Iranian borders. The issue of [Iran] transferring water to Kuwait was put forward in the early 1980s by those who benefitted from the implementation of a project to take the country’s water to Kuwait,” said the minister.

The rumour that Iran exports water has been around for almost two decades now, and the rumour is denied every time it begins flying around.

Afterwards, authorities announced that they would implement an emergency water transfer project in a matter of days to solve the problem.

Now, with the Ghadir II project slated to go on stream in a matter of hours, the drinking water problem in Khuzestan could be tackled.