War Veteran Talks about Life after Being Wounded in Syria 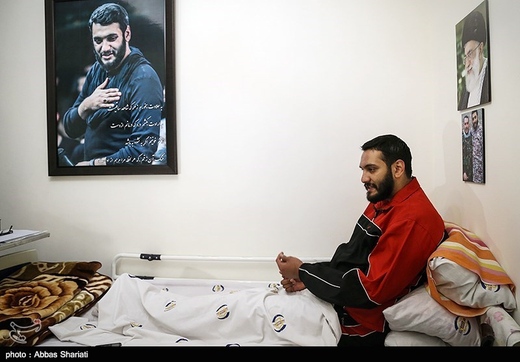 Habib Adbollahi, a young war veteran wounded by Takfiri terrorists in Syria back in early January, says he used to congratulate others on “War Veterans Day”, but now he has become one of them.

It has been four months since he was wounded on January 2. Now when we ask him “what it means to be a wounded veteran,” he gives a deep and bitter answer after a short pause.

“I think a wounded veteran means a left behind; one who has a permanent regret, and is going to live and grow up with a permanent and big regret,” Abdollahi said, according to an interview by Tasnim, as translated by IFP.

“Years ago, I used to congratulate my wounded friends on the Wounded Veterans Day – whether the ones who were wounded during the Sacred Defence (8-year war imposed by Iraq) or those who were wounded to ensure the country’s security, and even the ones recently wounded in the fight against terrorism in Syria and Iraq. I used to call them, but now that as a wounded veteran I’m suffering a series of problems, my viewpoint has changed,” he said.

“On this occasion, if I was healthy enough, I would have been visiting wounded veterans all day long,” the Iranian veteran added.

According to official statistics, there are nearly 550,000 disabled veterans of the Iran-Iraq War living in Iran as of June 2014. Many have also been wounded during the advisory missions in Syria and Iraq in the ongoing campaign against terrorism.