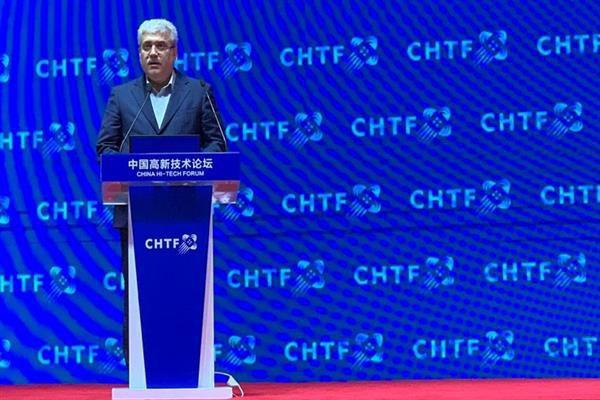 Vice-President for Science and Technology of the Islamic Republic of Iran Sorena Sattari has delivered a speech at the China High-Tech Forum 2019.

First and foremost, I would like to express my pleasure for being here and I hope holding such events leads to deepen trade and technology cooperation and bonds between the countries.

I would like to take the opportunity of my presence here in this elite gathering to encourage the countries, more than before, to develop friendly cooperation in high-tech trade.

As you already know, the open exchange of advanced products and technologies at the international level has provided a vital opportunity to meet the challenges facing societies.

Therefore, the cooperation of countries in the development and dissemination of technological innovations is the motivation for the increasing progress of the nations. In this regard, the Islamic Republic of Iran has always tried to use innovation as a tool to support the transition of societies to prosperity and development with an open view to its technological achievements. After many years of efforts by our researchers and scientists and reaching a high position in terms of scientific and technological achievements, on behalf of my country, I would like to express our determination to expand our strategic cooperation in the field of the promotion of innovation, in order to achieve mutual benefits.

I believe that the Islamic Republic of Iran’s experience in utilizing science and technology to meet the country’s needs in facing unfair international restrictions has provided valuable lessons for various countries. Hence, I would like to take this opportunity to share my country’s experience of transition from a natural resource-based and non-reliant on domestic capabilities economy to an economy with a significant share of knowledge-based products. Hoping that the path of development of science, technology and innovation in Iran can provide different countries with an informative experience.

Iran has always been well-known in public opinion as a rich country in terms of natural and cultural heritage. This fact, on the one hand, provides us with vast opportunities for the country’s development, and on the other hand, it highlights the danger of dependence on the country’s past assets and being contented to irresponsible exploitation of natural resources. For many years we have been faced with this question that at which side of this dual issue we should stay: creating wealth from the ending natural resources and living with past reserves or creating new circles to create value and build the future.

Here today, I can proudly say that we chose the second path. Decades of reliance on domestic capabilities has made it possible for our country to take a big step in changing the picture of its previous economy into a knowledge-based economy, thanks to the tremendous achievements in aerospace, ICT, nanotechnology, biotechnology, stem cells, cognitive science, renewable energies and pharmaceutical and medical technologies.

In the recent past, cheap and easy money obtained from the sale of raw materials had become a mean of inefficiency and waste of the country’s capacities.

The government was getting bigger and bigger with the oil money, and it dampened the motivations for risk-taking as well as creation of added value for universities and domestic industries who accessed those cheap funds that was allocated to them. The outcome of that process could jeopardize the country’s future and frustrate the country’s young and creative forces. Therefore, it seemed that serious changes were needed to be made.

A public call to avoid what is called resource curse, has created a new determination in the Islamic Republic of Iran to ensure the interests of the society: We need to build a creative future through innovation. Since the mid-1990s, innovation has become one of the most important policymaking keywords in Iran.

Since then, changes have been made at the highest levels of the country’s policymaking to integrate the country’s capacities for the development of scientific and technological innovation. High-level policy-making bodies such as the Vice Presidency for Science and Technology, the Supreme Council for Science, Research and Technology, the Innovation and Prosperity Fund, and the Strategic and Emerging Technology Councils have been established in this regard. At the same time, the orientation of national policies in national policy documents was adjusted towards scientific and technological development besides supportive laws and regulations that were ratified and adopted to promote technology penetration in the industry. The country’s Comprehensive Scientific Road Map and the supporting knowledge-based firms’ law are the most important examples that have led to the formation of a major innovation movement in universities and domestic industries.

These changes, which can be described as steps to strengthen Iran’s National Innovation System, have been established by three main logics: (1) prioritizing strategic technologies based on the country’s upstream policies and sustainable development goals; (2) providing simultaneous support for startup businesses to defuse innovation and conventional industries to create innovative outputs, and finally (3) transition from a government-related innovation system to an innovation ecosystem

These policies have been already presenting a new image of the Iranian economy; an economy with the government facilitation and smart financial partnership besides significant share of VC finance provided by private sector. Now, in this picture, there is an acceptable connection between academic researches on the one hand and the needs and demands of the society and industry on the other. Domestic industries are more motivated to enter higher value chains, and young entrepreneurs are showing more opportunities to establish their startup businesses.

I would like to emphasize that my country is now in the middle of a path that, thanks to the efforts of our scientists, entrepreneurs and government support, has created a huge social capital to support innovation policy. As a result of the two decades of scientific development efforts, Iran is ranked 16th in the world in scientific publications, increased by 18 places from 2005. After this successful transition, based on the domestic demands, we have been able to have the most engineering graduates in the world, and as a result of this move, we have promoted to have an export share of high-tech and medium-high tech exports with a significant leap of 1.5 billion $ in 2005 to $ 12 billion in 2014.

In terms of scientific achievements, the Islamic Republic of Iran has more than 229,000 Ph.D. students and a 1.85% share in science production worldwide. For example, in the field of nanotechnology, Iran is in the fourth place after the leading countries of the United States, China and India.

I should point out that these brilliant statistics have all achieved thanks to the country’s development of science, technology and innovation infrastructures. Iran has more than 2,390 universities around the country with approximately 4.8 million students. There are 44 science and technology parks in different cities with over than 4,500 companies based there.

In terms of infrastructure of financial support for innovation, only Innovation and Prosperity Fund with total capital of $ 395 million has supported about 5,400 innovative projects, so far.

I should emphasize here that Iran’s policy transition towards a knowledge-based economy has also had remarkable results in terms of innovation outputs. Since the ratification and adoption of the supporting knowledge-based firms’ law in 2010, about 4,700 companies have been entitled as knowledge based companies according to their technological capabilities. These companies generated $ 11 billion of the total annual value of the Iranian economy in this short time and generating more than 140,000 direct jobs.

Let me just mention a few examples of these technology companies. CinnaGen, as a biotech-based pharmaceutical company, is the largest exporter of bio-pharmaceuticals in the region. Also, as an example of Iran’s remarkable advances in stem cell technology, Kish Tissue Regeneration Corporation is one of the world’s leading companies in the field of bio-implants production. Tuga is a leading company in the design and production of turbines and PR Saadat is one of the largest Iranian knowledge-based companies that has commercialized numerous technology-based medical products. Also, Snapp is Iran’s first unicorn start-up in urban transportation with more than half a million drivers and is considered as the seventh largest startup of its kind in the world.

It may be better to present more detailed information about what I have stated here so far as the experience of two decades of Iran’s attempts to transition from a resource-based economy to a knowledge-based economy. This is Iran’s dramatic breakthrough in the Global Innovation Index over five years. According to the latest Global Innovation Index report, Iran’s ranking of innovation in 2019 among the countries of the world has been improved by 60 places. The Islamic Republic of Iran has, in almost all respects, reflected the innovation performance at the national level, with a successful transition to create a dynamic innovation ecosystem.

I believe that this great move could not have been possible but with the great determination to cut off dependency on easy resources. At the same time, I emphasize that the current point is not the end of our path. We are now placed in the midst of this way where difficult challenges are ahead. The first and most important challenge is the stabilization of the importance of science, technology and innovation policy and its capability to coordinate across policy sectors and levels.

Another challenge is to improve research productivity via funding researches with a competitive rationale based on the performance of research institutes. At the same time, it is a challenging goal to delegate research and development activities from the public sector to the private sector, which in turn enhances research achievements. In addition, unlimited access to international capital resources to finance innovative projects requires a serious international determination that is difficult to achieve. Finally, the dissemination of innovation to the various economic sectors that caused them to benefit from the results of the knowledge-based economy, is a serious policy challenge.

The suggestion I offer here in light of the experience of innovation policy in the Islamic Republic of Iran to address these challenges is to deepen international cooperation in order to open access to innovation blessings for all societies. Exchange of scientists, entrepreneurs and technology based on the mutual benefits of the nations, collaboration on major industrial projects based on national priorities, collaboration on the development of creative and startup solutions for different societies’ problems, sharing policy experiences on different innovation ecosystems through policy dialogue and joint cross financing for innovative projects at international level are different types of collaborative efforts that can be effective in fostering the nation’s innovation capacity.

It should be emphasized here that, given the will of the Government of the Islamic Republic of Iran, to expand strategic cooperation with various governments in the field of innovation dissemination, there is now a good opportunity to share scientific, technological, human force, financial and market capacities in Iran. I do believe that realization of cooperation in this area will be possible through serious determination and goodwill of the partner governments.

In the end, I thank you so much for your kind attention, and I hope that holding this event will usher in a friendly and long-term relations between the countries in the field of science, technology and innovation.