Volkswagen on course to replace Peugeot in Iranian market 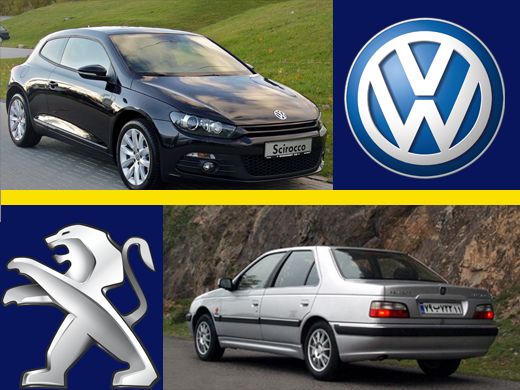 Iran Khodro has reached the conclusion that in the current conditions, Volkswagen is a better choice for partner and can better help promote the Iranian automotive industry.

The famous saying of “what goes around comes around” can best apply to present relations between Iran Khodro, Iran’s leading automaker, and France’s Peugeot.

Although some are set to celebrate the reunion of the two giant carmakers [after the conclusion of a deal between Iran and P5+1 which will eventually see sanctions lifted], it seems that Germany’s Volkswagen has caught Iran Khodro’s eye as a better choice of partner.

The following is the translation of an analytical report published by Donyay-e Eghtesad daily on July 25 about ups and downs of partnership between Iran Khodro and Peugeot and the reason why the Iranian automaker is more inclined to choose Volkswagen, rather than Peugeot, as its main partner:

Early in 2012, Peugeot unilaterally broke up its 24-year partnership with Iran Khodro. Without giving any reason, it upped and left the Iranian market. Later it became known that tempting offers by General Motors were behind the abrupt end of partnership.

Leaving Iran Khodro to its own devices at a time when the company was in dire straits and was grappling with a production crisis dealt a heavy blow to the Iranian company.

Iran Khodro had to fix the problem and in doing so, it even reached out to other companies, because General Motors, Peugeot’s new American partner, would not allow the French automaker to help Iran Khodro address the issues of the cars they used to manufacture together.

According to well-placed sources, Volkswagen has apparently presented better partnership offers than Peugeot. That’s why Iran Khodro considers replacing the French automaker with its German rival.

Some experts believe that apart from technical and technological advantages of Volkswagen, other factors have contributed to Iran Khodro’s decision to shift from Peugeot to Volkswagen.

Some other experts argue that Peugeot’s failure to honor its partnership commitments and Iran’s concerns about a repeat of such behavior by the French automaker have contributed to the shift toward Volkswagen.

Critics of Peugeot believe that the company has done Iranian customers and automaking industry injustice and must be punished and that Iran Khodro should not easily re-enter into partnership with the French firm.

That said, well-placed sources say that a series of developments which unfolded over the last 18 months, between the Geneva interim agreement and the nuclear deal in Vienna, coupled with talks between Iran Khodro and foreign companies have convinced the Iranian automaker to shift its attention from France to Germany.

In other words, Iran Khodro has reached the conclusion that in the current conditions, Germany in general, and Volkswagen in particular, is a better choice for partner and can better help the Iranian auto-making industry.

That of course does not amount to an outright removal of Peugeot from Iran Khodro’s cooperation list, and the French company is not out of the picture yet.

Based on reports released by Iran Khodro, the company seeks to divide its market among four partners, with the main partner holding a 50 percent share and the rest of the shares divided among the other three.

If such reports turn out to be true, as Iran Khodro’s main partner, Volkswagen will secure a 50 percent share of the company’s market and Peugeot should try to secure a substantial share of the other half of the market of the largest automaker in the Middle East.