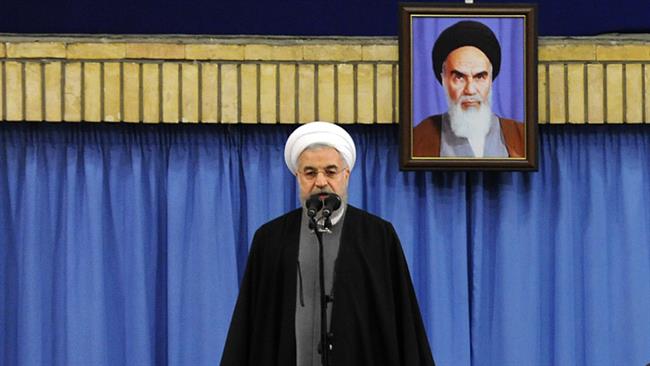 Iran’s President Hassan Rouhani names the US and Zionism as the main forces behind terror and insecurity gnawing away at the Middle East.

“Who brought terror and insecurity to this region?” he asked on Thursday, addressing a meeting in which Iranian officials and ambassadors from Muslim states met with Leader of the Islamic Revolution Ayatollah Seyyed Ali Khamenei.

“Who set up a usurper regime (Israel) in this region around 70 years go? Is not a good deal of the insecurity, assassinations and wars in our region rooted in the regime occupying al-Quds?” he further asked.

The Iranian president also referred to the US-led invasions of Afghanistan and Iraq, saying “Zionists and Americans are responsible for all these crimes.”

He also condemned centuries-long Islamophobic efforts by Western Islamophobes, on the one hand, and “ignorant friends” or “dependent mercenaries,” on the other hand, adding, “Both [groups] have endangered Islam’s reputation and status like the blades of a pair of scissors.”

‘No mum on Yemen bloodbath’

The Iranian chief executive also asserted that the Islamic Republic would not remain silent over Saudi Arabia’s bloodletting and destruction in its impoverished southern neighbor.

“How can we remain silent while Yemeni people are savagely bombed everyday by those who call themselves the custodians of the Grand Mosque [of Mecca]?” he said.

The kingdom has been pounding the Arab world’s poorest nation since last March to shore up the former Yemeni regime and undermine Yemen’s Houthi Ansarullah movement. More than 9,500 people have been killed and at least 16,000 others injured since the onset of the Saudi aggression.