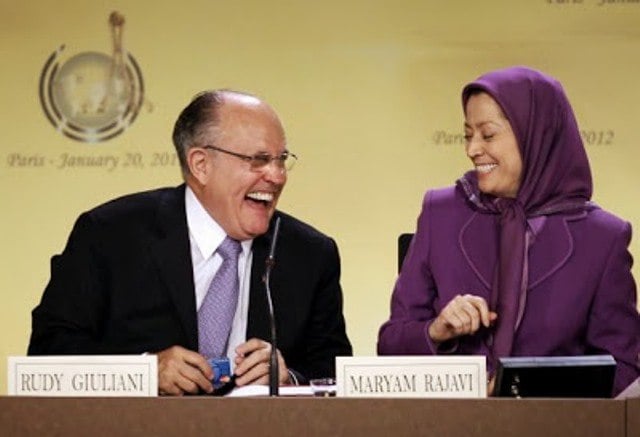 A senior human rights activist says the US’ support for the anti-Iran MKO terrorist group comes despite the fact that the cult has assassinated thousands of innocent people, including American citizens, and never apologized for that.

The comments were made by Emadeddin Baqi, a senior human rights activist, lawyer, prisoners’ rights advocate, investigative journalist, theologian and writer, who has authored over a dozen books.

Baqi, who has spent several years in jail as a political prisoner, was awarded the Civil Courage Prize in 2004. The following year he won a human rights award from the French government, and in 2009, won the Martin Ennals Award for Human Rights Defenders.

In a recent article, he has weighed in on the activities of the terrorist Mujahedin-e Khalq Organization (MKO), including the thousands of terrorist attacks it has committed against Iranians as well as its collusion with the US and the former Iraqi strongman Saddam Hussein.

In his analytical piece, the rights activist says the MKO’s pipe dream of assuming power in Iran is an insult to Iranians’ intelligence, and that the US’ support for the cult is surprising given the dark record of MKO terrorists.

“Reports that the MKO terrorist group led by Maryam Rajavi held a meeting in the French capital, Paris, where US officials were also present, have drawn the ire of independent, patriotic and freedom-seeking people in Iran, who consider it an insult to see a terrorist group, which has a stained track record and functions as the pawn of a foreign power, entertains the idea of assuming power,” he noted in a recent piece published in Sazandegi newspaper.

“I, as a human rights activist, regard as a crime against humanity the group leader’s call for rebellion, which means fueling violence and chaos in Iran and giving rise to a situation like the one in Syria,” Baqi added.

He says the Iranian nation will never resort to a terrorist group even if they do not approve of the performance of the ruling system in their country.

“Even if we are fed up with the current ruling system, we will not turn to the worst option available. The MKO is a group which had set up a tiny rule in Camp Ashraf in Iraq, and 500 out of its 3000 members in a garrison were imprisoned. The Human Rights Watch, as an internationally recognized rights institution, conducted a field study and published a damning report on the situation in Camp Ashraf. The report reveals torture, sexual repression, breach of the freedom of expression and violation of human dignity,” he writes.

“It was unbelievable to find out that there exists such a horrendous ruling system where, as in North Korea, only their own radio and TV programs promoting their ideology and activities were allowed. All other media were forbidden. Every morning began with a ceremony where the same song in praise of Rajavi was recited. Now, they are going to develop the same model elsewhere? They and the Americans apparently do not believe in the intelligence and intellectual development of Iranians, who have weathered such models and styles. In fact, by promoting the MKO cult, they are insulting Iranians’ intelligence and dignity,” he further explains.

The human rights activist also touches upon the history of the MKO’s terrorist activities against Iranians. The group assassinated several Iranian officials and figures, and was working with the former Iraqi regime against Iran as well. The history of the MKO’s cooperation with the Iraqi Ba’th Party goes back to long before the victory of the Islamic Revolution in 1979. Two arrested members of the MKO, namely Ahmadreza Karimi and Fazel al-Bastam, had an interview with the former Pahlavi regime of Iran in 1973 in which they confessed that al-Bastam had been spying for the Ba’ath regime.

“Back in 1981, the MKO got involved in armed activities and acts of terror, preparing the ground for the violence-seeking current within the system to gain power. That entangled us in a cycle of violence for 30 years and set back Iran’s development. The MKO was working hand in glove with the former Iraqi dictator Saddam Hussein, who launched a war against Iran in the 1980s. After helping Saddam Hussein’s army during the war, the MKO has now joined Trump and Israel while being funded with Saudi money and is ratcheting up its anti-Iran rhetoric at the Paris meeting,” says the rights activist.

He also says the MKO has not officially apologized to the US for assassinating its authorities, but is working with them closely.

Baqi was referring to two separate operations in 1973 and 1975, in which MKO operatives assassinated several senior US officials and nationals in Tehran. In the 1975 operation, two top American military officials, Jack Turner and Air Force Colonel Paul Shaffer, were assassinated. Their briefcase, which contained invaluable information, fell into the hands of the MKO, which handed it over to the KGB, the main security agency for the Soviet Union.

“Surprising enough, the MKO has not yet officially apologized for the assassination of US officials and former Pahlavi regime’s authorities before the 1979 Islamic Revolution, as well as the assassinations following the revolution,” Baqi noted, while being surprised how senior American officials are still attending the MKO’s annual gatherings despite such a background.

“Moreover, the Americans launched a military invasion of Iraq and toppled Saddam Hussein, but now they have entered into an alliance with one of his allies. Now, how can one believe the claims about the human rights situation in Iran put forward by Trump’s Neanderthal team?” says the rights activist.

He says the MKO is a despicable terrorist group which violates human rights and has committed crimes against humanity anywhere and under any rule.

“I, as a person who has had the honour to receive several domestic and international human rights awards [from dissenters], hereby announce that I have defended the rights of prisoners regardless of their tendencies (even if they are MKO members) to the best of my ability whenever inmates’ rights have been trampled underfoot. I believe some of them are noble people who [were misled and] got integrated into this group and missed their chances. However, I regard the MKO as a group which is against human rights, as our defence for the rights of criminals does not mean we are approving of their crimes,” says Baqi.

He says Iranians definitely are against the MKO and do not approve of its actions, whatsoever.

“Everyone should know that Rajavi, due to his disgraceful track record, has no social base in Iran. He only cashes in on propaganda ploys and uses his skill in triggering controversies and brainwashing people to lure them and maybe he can deceive some naïve people, but the Iranian society will not fall for old tricks.”

In his article, Baqi has also criticised the performance of Iranian security forces during the post-election unrest in Iran in 2009. He says the Iranian government tried to create the impression that the widespread public protests in that year were a plot hatched by the MKO. In fact, the government’s move seemed to be well-intended; it wanted to keep the Iranian nation from falling into the trap of the terrorist group. Nevertheless, the terror group took advantage of the situation and aggrandized itself before foreign powers. The MKO tried to create the impression that it has the necessary potential to replace the Islamic establishment and rule the country.

Baqi says the MKO is one of the most hated opposition entities in the eyes of Iranian people, and a very small cult that is not capable of triggering such massive and widespread protests in Iran. He says the Iranian security forces and state media made a mistake in 2009 by attributing the unrest to the terrorist cult.