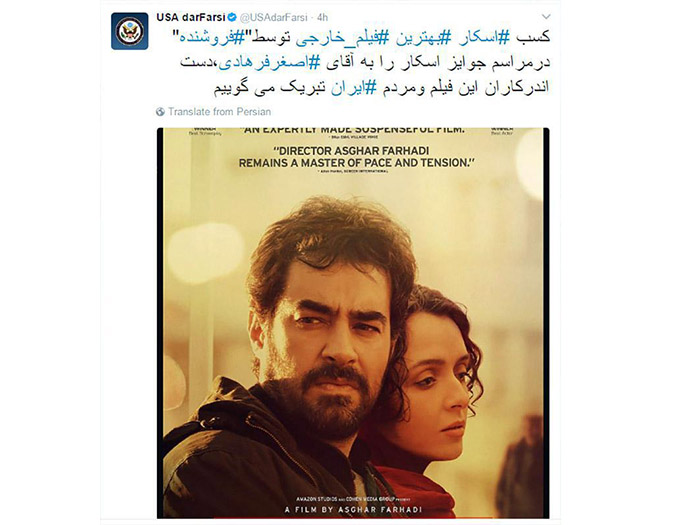 The US state department deleted a congratulatory message for an Oscar win by prominent Iranian filmmaker Asghar Farhadi who had criticized President Donald Trump’s travel ban as “inhumane”.

The state department’s official Persian-language Twitter account, @USAdarFarsi, tweeted congratulations to the Iranian people and Asghar Farhadi, director of The Salesman, after the movie won an Oscar for best foreign-language film on Sunday, according to screenshots of the message circulated on Twitter.

However, it later removed the tweet “to avoid any misperception that the USG [US government] endorsed the comments made in the acceptance speech,” according to a US State Department spokeswoman.

A second state department official said the decision to delete the tweet was made within the department.

Farhadi boycotted the Oscars ceremony and issued a statement criticising Trump’s January executive order that temporarily banned entry to the United States by Iranians and citizens of six other Muslim-majority countries. The ban was blocked by federal courts, although the administration has said it is working on a new order, The Guardian reported.

Farhadi chose two Iranian-Americans – a female engineer and a former NASA scientist – to represent him at the ceremony. Anousheh Ansari, an engineer who was the first female space tourist, read a statement on Farhadi’s behalf calling the travel ban “inhumane”.