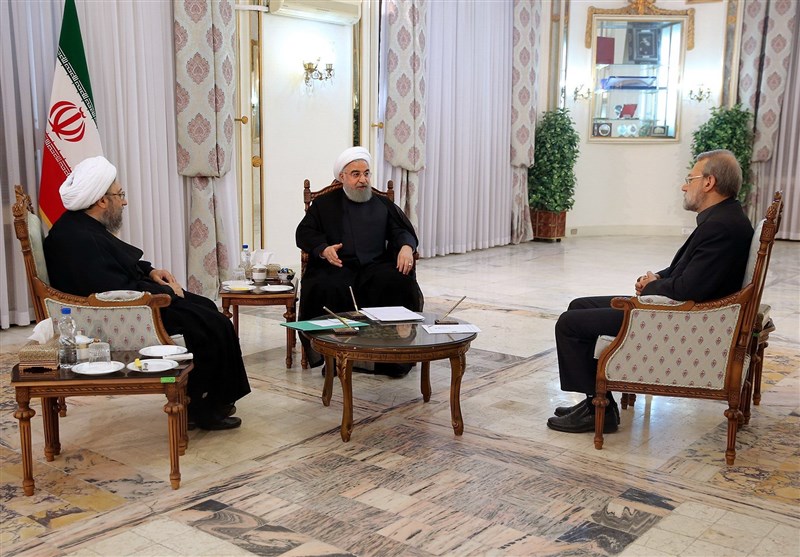 The enemies of Iran, the US in particular, seek to dispirit the Iranian nation and hinder investment in the country, President Hassan Rouhani cautioned, saying the US and the Israeli regime are angered at their failure in various plots against the Middle East.

Iranian media and virtual space activists should be aware that the objective pursued by big powers, especially the US, is to demoralize the Iranian people and cast doubt on investment and activities in Iran, President Rouhani told reporters on Saturday.

He made the comments after a trilateral meeting with Parliament Speaker Ali Larijani and Judiciary Chief Ayatollah Sadeq Amoli Larijani, held in Tehran to discuss the latest domestic and international developments.

Highlighting regional countries’ success to deal with various challenges, the president said Iraq, Syria and Lebanon have been successful in defeating terrorism by reliance on their armies and with the support provided by their allies, particularly Iran.

The US, the Zionist regime of Israel and their cronies are infuriated at the failure to carry out their hostile plots in the region, such as the recent plan to trigger secessionist moves and redraw regional borders, Rouhani added.

He further called for vigilance in the face of new plots against the region.

In comments at the beginning of the new Iranian year in March, Leader of the Islamic Revolution Ayatollah Seyed Ali Khamenei said the enemies seek to exert economic pressure on Iranians to discourage the nation from supporting the Islamic administration and drive a wedge between people and the administration.

Ayatollah Khamenei also pointed to the hostile plans to attribute the economic deficiencies to the Islamic Establishment, and highlighted the “remarkable and extraordinary” services provided by the Islamic Republic.