US Sanctions Have No Impact on Hezbollah: Nasrallah 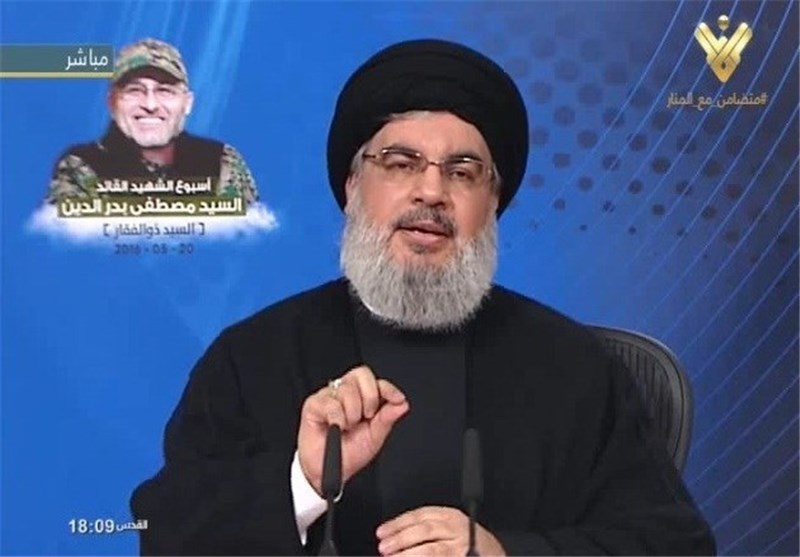 Secretary General of the Lebanese Resistance Movement, Hezbollah, Seyyed Hassan Nasrallah deplored a US sanctions law seeking to tighten the noose on the party’s finances, saying that the law would not have any financial impact on the movement.

Nasrallah said Hezbollah entirely rejected the US sanctions, calling them an attack on the country’s sovereignty.

“We totally reject this [US] law until the Day of Judgment. … Even if the law is applied, we as a party and an organizational and jihadi movement, will not be hurt or affected,” Nasrallah said in a televised speech on Friday marking the passing of 40 days since the martyrdom of Hezbollah’s top commander Mustafa Badreddine in Syria.

“The law will not have any financial impact on Hezbollah. I have said before that we do not have commercial or investment projects and commercial institutions that operate through banks,” he said, addressing a Hezbollah memorial ceremony for Badreddine at a complex south of Beirut via video link.

Although Iranian support for his group has for been a well-known fact for a long time, Nasrallah pointed out that Hezbollah is receiving its money and arms from Iran. “As long as Iran has money, Hezbollah has money. … Can we be any more frank than that?” he said.

“Hezbollah’s budget and its expenses are coming from the Islamic Republic of Iran. … Our allocated money is coming to us in the same way we receive our rockets with which we threaten Israel,” Nasrallah said, drawing cheers from the crowd. “No bank in the world can prevent money reaching us.”

He thanked the Leader of the Islamic Revolution Ayatollah Seyyed Ali Khamenei, Iran’s President and its government for their “generous support” for Hezbollah during the years of resistance against Israeli occupation of south Lebanon that ended in 2000, the Daily Star reported.

“Some banks in Lebanon went too far and they became more American than the Americans themselves. They even did something that the Americans did not ask for. They targeted people and charitable foundations that were not mentioned in the US list,” Nasrallah said, in reference to a sanctions list designated by the US Treasury Department’s Office of Foreign Assets Control.

“There are some banks, that if a person is related to a Hezbollah member, they will close their accounts. This is an attack on charitable foundations and our people and we reject this attack, and we will not allow it. Whoever says they care about the financial sector, they shouldn’t target a third of the population,” he added.

Nasrallah said Hezbollah has started a dialogue with Lebanese officials on the basis of rejecting the US law. “We are open to any dialogue to solve this [US sanctions] file,” he said.

The US law, which went into effect in March, threatens to bar from the American financial market any bank that knowingly deals with Hezbollah or institutions or persons affiliated with the group.

In his speech, Nasrallah touched on his party’s involvement in the 5-year-old war in Syria, saying that Hezbollah has lost 26 fighters this month in the battle for Aleppo. He vowed to increase the group’s presence in the northern Syrian province, which he said determined the fate of the entire region.

“We are facing a new wave of war plans in Syria that are being fought in northern Syria, namely in Aleppo,” he said. “The fight to defend Aleppo is the fight to defend Syria, Lebanon, Iraq and Jordan, which paid the price recently.”

“What is happening in Aleppo is an attempt to give a new opportunity for the American-Saudi-takfiri project to make a new achievement that has not been made before,” Nasrallah said. He added that thousands of armed men have entered Syria via Turkey for the battle in Aleppo.

Nasrallah said the 26 fighters Hezbollah lost since the beginning of June was a relatively low figure compared to the 617 militants he said were killed on the other side. Another 800 militants were wounded in the battle, and Hezbollah destroyed 80 of their tanks, he said.

“In a battle like this you would expect more martyrs than that,” he said.

He added that in addition to the 26 martyred in Aleppo, one Hezbollah fighter is missing, and another one has been captured by militants. He said he provided the figures in response to media that have been claiming that scores of Hezbollah were killed in the battle.