US push for normal ties with Iran a Trojan Horse for infiltration: Cleric 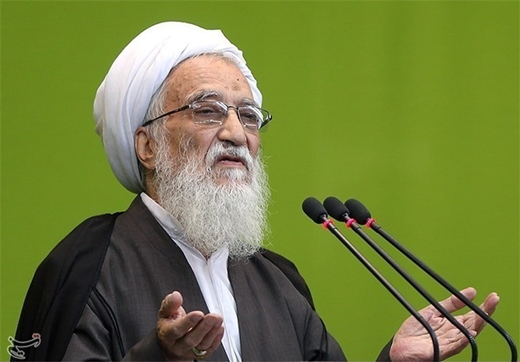 A senior Iranian cleric on Friday categorically dismissed the idea of normalization of ties with the US, warning that Washington seeks to regain a foothold in Iran and carry out its unchanged, hostile policies in disguise.

“The world and the Iranian parliamentarians should know that the US dreams about normalization of ties with Iran as a scheme to infiltrate into the country and implement… the policy of hostility toward Iran and Islam under the guise of smiles,” Ayatollah Mohammad Ali Movahedi Kermani told a huge gathering of worshippers in Tehran.

The cleric underscored that Washington’s dream of compromise with Iran and regime change in the Islamic Republic will never come true.

The US has not changed a bit, Ayatollah Movahedi Kermani noted, saying America is still an enemy of Islam and still supports Islam’s foes and pursues the policy of bullying.

What will remain in place is the divine establishment of the Islamic Republic of Iran, while what is going to be destroyed is the Zionist regime of Israel, the top cleric added, stressing that dissolution of Israel will definitely happen in the future.

Supreme Leader of the Islamic Revolution Ayatollah Seyyed Ali Khamenei said Wednesday US hostility toward the Iranian nation will never end, calling for Iran’s increasing “national might” to fight off US plots.