US, Israel Doing All in Their Power to Counter Iran: Leader 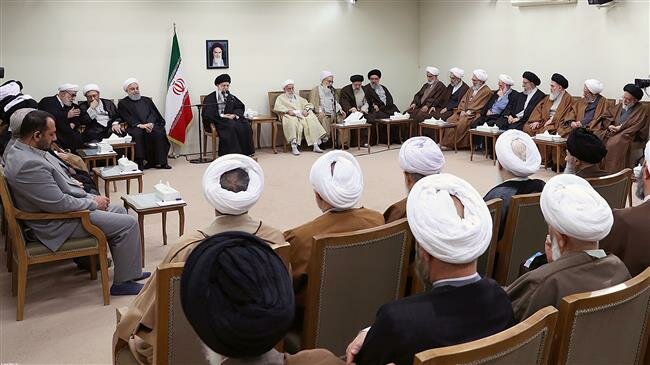 Leader of the Islamic Revolution Ayatollah Seyyed Ali Khamenei warns that the US and the Israeli regime have been doing all in their power to advance their hostile campaign against the Iranian nation, calling for “maximum mobilization” in the face of enemy threats.

Ayatollah Khamenei made the remarks in a meeting with members of Iran’s Assembly of Experts in Tehran on Thursday.

The Leader further underlined the need for a “maximum mobilization of forces in the face of the enemy’s maximum offensive.”

“The enemy, namely the US and the Zionists, has today mobilized all its resources and capabilities against the Iranian nation, while the Westerners and the Europeans somehow exercise enmity against Iran from the sidelines,” the Leader explained.

Referring to the “toughest ever” sanctions imposed by Washington against Tehran, the Leader said, “They (the Americans) have launched a maximum offensive against Iran, but if (in return) we mobilize all our resources and capabilities, we will deal the heaviest blow in US history to that country with God’s blessing.”

The Leader enumerated different approaches that the country can adopt in dealing with enemy threats, saying the Iranians have extensive experience with the methods being used by the enemy camp in its confrontation with the Islamic Republic.

Ayatollah Khamenei cited Washington’s withdrawal in May 2018 from the 2015 Iran nuclear deal as only one of the numerous examples, calling on the country to making use of the new experience it gained when the US reneged on its commitments under the agreement.

“Our real enemy is the US and we will make no mistake in recognizing our enemy,” the Leader stated

The Leader emphasized the need for creativity in facing the enemies, saying the Islamic Republic will hit the enemy where it never thought of if a creative approach is taken against it.

Ayatollah Khamenei received members of the Assembly after it wrapped up an annual meeting focused on major international and domestic issues including the current economic challenges facing the country in the wake of re-imposition of illegal sanctions by the United States.