US Blacklisting of IRGC Insult to Iranian Nation: Rouhani 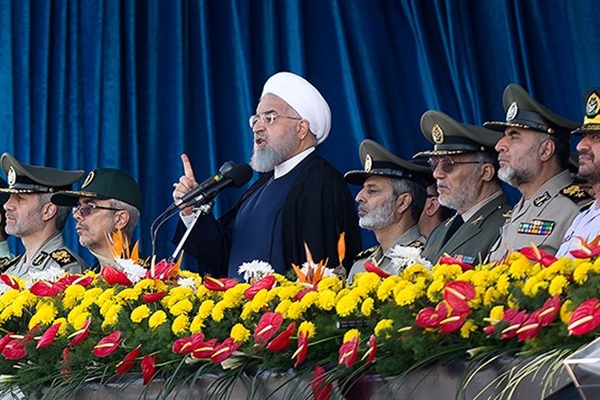 Iran's President Hassan Rouhani says the United States designation of the Islamic Revolution Guards Corps as a terrorist organisation is an insult to Iran.

The Iranian president made the remarks in an address to a Thursday ceremony marking the National Army Day in Tehran.

The United States last week officially registered the IRGC as a “foreign terrorist organization,” according to a notice published on the website of the US Federal Register.

US President Trump said in a statement on April 8 that he had designated the IRGC as a foreign terrorist organization, adding that the move “makes crystal clear the risks of conducting business with, or providing support to, the IRGC. If you are doing business with the IRGC, you will be bankrolling terrorism.”

In his Thursday remarks, Rouhani further said the Armed Forces of Iran are not against regional countries and their national interests. He said they stand against invaders, but the root cause of problems are the Zionist regime and American imperialism.

President Rouhani called on countries in the Middle East to push back Zionism.

“The regional nations have lived next to each other for centuries and never had a problem. If there is a problem, it is caused by other countries.”

Further, the Iranian president called on Muslim nations to be united to protect the right of the nation of Palestine stressing that Zionism has been committing crimes in the region in the past 70 years.

“The final victory will certainly be with the righteous,” he underlined.

Iran’s annual Army Day celebrations are a chance for the Iranian military to put on show its latest weaponry.