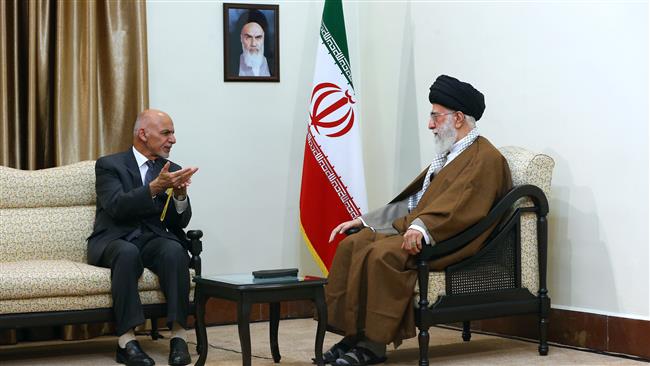 Leader of the Islamic Revolution Ayatollah Seyyed Ali Khamenei says that unlike certain governments like the US and Britain, the Islamic Republic has always treated Afghans with respect and hospitality.

“Unlike certain countries, such as the US and UK, the Islamic Republic of Iran has always treated the Afghan people with respect, brotherhood and hospitality and will withhold no technical, engineering and infrastructural assistance for Afghanistan to exploit its natural resources,” Ayatollah Khamenei said in a meeting with visiting Afghan President Ashraf Ghani in Tehran on Monday.

Ayatollah Khamenei called for a swift settlement of the issue of Iran-Afghanistan border waters, saying: “Such issues should not give rise to enmity and rancour in the relations between two countries such as Iran and Afghanistan that share borders, culture and needs.”

The Leader said Iran has always cared for Afghanistan’s interests and security and “considers this country’s progress in all sectors as its own.”

For his part, Ghani appreciated Ayatollah Khamenei’s “positive view” of Afghanistan and the Iranian nation’s hospitality.

He expressed hope that his talks in Tehran would help broaden ties between the two countries.