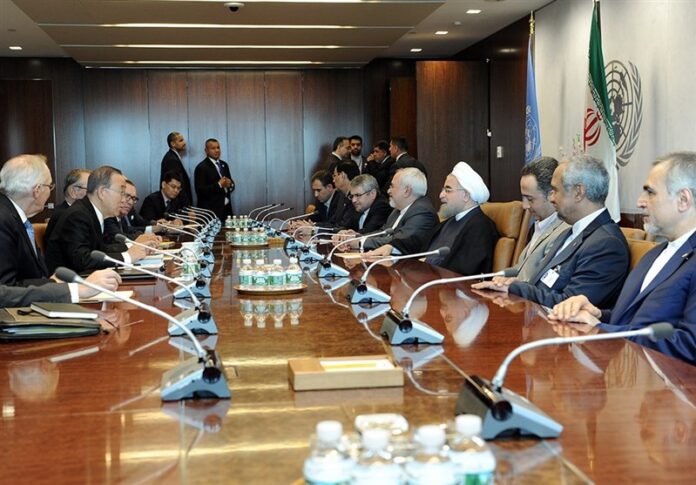 UN Secretary General Ban Ki-moon has called for Iran’s help towards finding a solution to the conflicts in Syria and Yemen.

Ban made the request during a meeting with Iranian President Hassan Rouhani held on the sidelines of the 71st session of the United Nations General Assembly in New York on Wednesday.

During the brief meeting, Ban requested that Rouhani use his influence towards reviving the peace process in the two Arab countries.

Ban also stressed the importance of the full implementation of the Joint Comprehensive Plan of Action (JCPOA) by all related parties.

The July 2015 deal, struck between Iran and the P5+1 countries, namely Britain, China, France, Germany, Russia and the United States, envisaged Tehran scaling back its nuclear program in return for the lifting of all nuclear-related sanctions on the Islamic Republic.

For his part, Rouhani expressed deep concerns over Saudi Arabia’s incessant military attacks and war crimes against the people.

Despite pressures, the United Nations should not “give up its responsibilities concerning the basic principles of human rights in Yemen,” he said.

Meanwhile, Rouhani called for a peaceful solution to the Syrian conflict ravaging the country for the past five years.

“What is of utmost importance is to understand that Syria doesn’t have a military solution,” he said during an interview with NBC, adding, “And the Syrians’ problems must certainly be resolved politically. Only politically.”

He also rejected calls made earlier by US Secretary of State John Kerry, who demanded that Syria and Russia ground all aircraft in Syria’s northern regions.

Rouhani stressed that such actions would only benefit the terrorist groups operating in the region.

Iran has always supported the Iraqi people and government, especially in the challenges that the country has been facing over the last few months, and will continue to do so, Rouhani said.

He also voiced hopes that the two countries would adopt visa-free travel for their citizens in the near future.

For his part, Abadi noted that Tehran-Baghdad relations were strategic and beneficial to the two countries and the region.

During a separate meeting with Pakistan’s Prime Minister Nawaz Sharif, Rouhani expressed hopes that the economic ties between both countries would strengthen.

Iran has always tried to keep “a border of security and friendship with Pakistan, and a lot of progress has been in this regard,” Rouhani said.

Sharif, for his part, noted that he deems Pakistan and Iran as one nation.

“Our culture, tradition and economy complement each other, and Pakistan is seeking to increase the level of its cooperation with Tehran,” said Sharif.

In a separate meeting with Norwegian Prime Minster Erna Solberg, Rouhani noted that the two countries should use the opportunities opened up in the post-JCPOA era and increase mutual cooperation.

He noted the Iran would welcome cooperation with Norwegian companies in the energy sector among other fields.