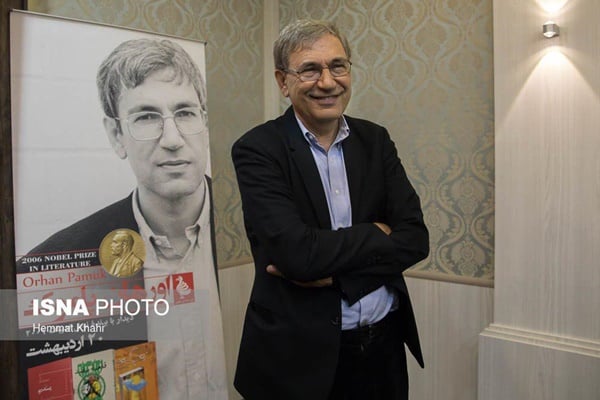 Turkish Nobel Literature Prize laureate Orhan Pamuk says he is deeply interested in Persian classic fables, adding he writes his works by indulging himself in the Iranian literature and history.

During his recent visit to Tehran, Pamuk elaborated on his love for the Persian history and literature, and how his works had been inspired by Iran.

He says he was told by many of his readers that his novel “My Name is Red” is a Persian novel in terms of style and atmosphere.

“Though the novel revolves around characters and events in the Ottoman era in Istanbul, it is the Persian fables and arts which have the final say there. I’m interested in the Iranian history under Safavid dynasty and my works are built on this era’s arts,” he said in a recent interview with Etemad daily newspaper.

Elaborating on his career as a professional writer, Pamuk said his love to write has turned him into a writer. “Whatever feeling I may have, the love to write remains unchanged in me. I like to depict whatever I see either through writing or painting,”

Pamuk went on to say that he can spend a long time alone in a room by writing and painting and added, “But my imagination does not remain in the room and wonders around the world.”

Criticism of Turkish Gov’t for Restricting Freedom of Opinion

Elsewhere in the interview, Pamuk referred to the prices he has already paid for his protests against certain policies of Turkey’s ruling party and added, “Once I put my weight behind the Armenians and in response the government decided to ban my book in some cities.”

He also added that the point of his criticism is directed at the Turkish government rather than nation for restricting the freedom of expression.

“I maintain that Turkey should join the EU because the membership will promote our culture, economy and politics. I believe in Liberal Democracy principles and criticise any move distracting us from the principles.”

The Noble laureate underlined that winning the Noble prize has turned him into Turkey’s ambassador at the international level, and he is not happy about it.