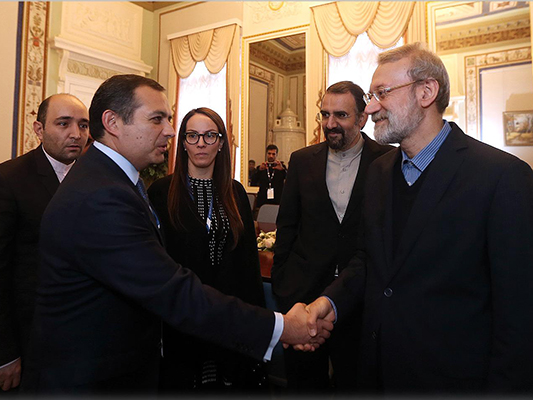 “Trump views all affairs only through the prism of money and lacks a systematic view of the global peace and stability,” Ali Larijani said on Sunday during a meeting with his Mexican counterpart on the sidelines of the 137th Assembly of Inter-Parliamentary Union which is underway in the Russian city of Saint Petersburg.

Larijani also called for expansion of bilateral ties with Mexico saying there are ample capacities to strengthen economic ties between the two sides, according to a Farsi report by ICANA.

“We welcome the presence of Mexican companies and investors in oil, gas and petrochemical fields in Iran,” he noted.

He then referred to Trump’s plan to set up a wall along borders between the US and Mexico and added “Trump is used to making weird statements.”

For his part, the Mexican Parliament Speaker, Jorge Carlos Ramirez Marin, called for expansion of bilateral relations between Iran and Mexico and added some steps have already been taken in this regard.

He went on to say that Iran and Mexico have also good capacities to expand their ties in the field of energy.

“Meanwhile, football can also play a key role in the expansion of relation between Iran and Mexico. The styles of Iran and Mexico national football teams are similar to each other,” he noted.

Ramirez Marin also referred to Trump’s plan to erect a wall along US-Mexico border and said “before Trump, the world had suffered from the presence of many walls but today erecting walls between countries has turned into an impossible issue with hefty costs and consequences.”

“Trump’s stances have created chaos making the Mexican people anxious about their future. So, the Mexicans have a negative view of Trump. Even in the US, the moderates are outraged by his policies,” he said.

The Mexican parliament speaker said today, Trump is imposing a hefty cost on the US and expressed the hope that Trump would not be re-elected for another term.