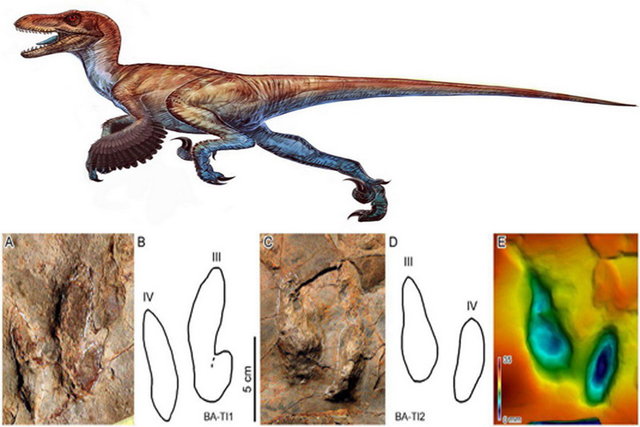 Iranian scientists have managed to find the archaeological traces of some feathered dinosaurs in Iran in cooperation with professors from Beijing and Colorado universities.

The Associate Professor of Zanjan University, Nasrollah Abbasi, says drawing on the recent discovery of a rich collection of dinosaurs’ traces in the Central Alborz Mountains, Iranian scientists along with their counterparts from Beijing and Colorado universities have found traces of feathered dinosaurs in Iran.

In a Farsi interview with ISNA, Abbasi said that the latest research shows that the extinct reptiles in Iran included feathered dinosaurs from running dinosaurs species.

“In cooperation with Lida Xing from Beijing University’s Geology College and Martin Lockley from Colorado University, we studied the sedimentary rocks in Baladeh region of Mazandaran Province [in northern Iran] and found the traces of two-fingered dinosaurs which belonged to feathered dinosaurs species,” he said.

Abbasi went on saying that the traces date back to 179 million years ago.

“The discovery is significant for two main reasons: First, it proves that Iran used to host feathered dinosaurs in the past, and second, it sheds light on some vague issues regarding the lives of two-fingered dinosaurs.”

According to Abbasi, this is the fourth largest discovery in this field across the world which provides the scientists with some clues to understand the ambiguous points about dinosaur species in Iran.

The findings have been published by Historical Biology Magazine, he concluded.