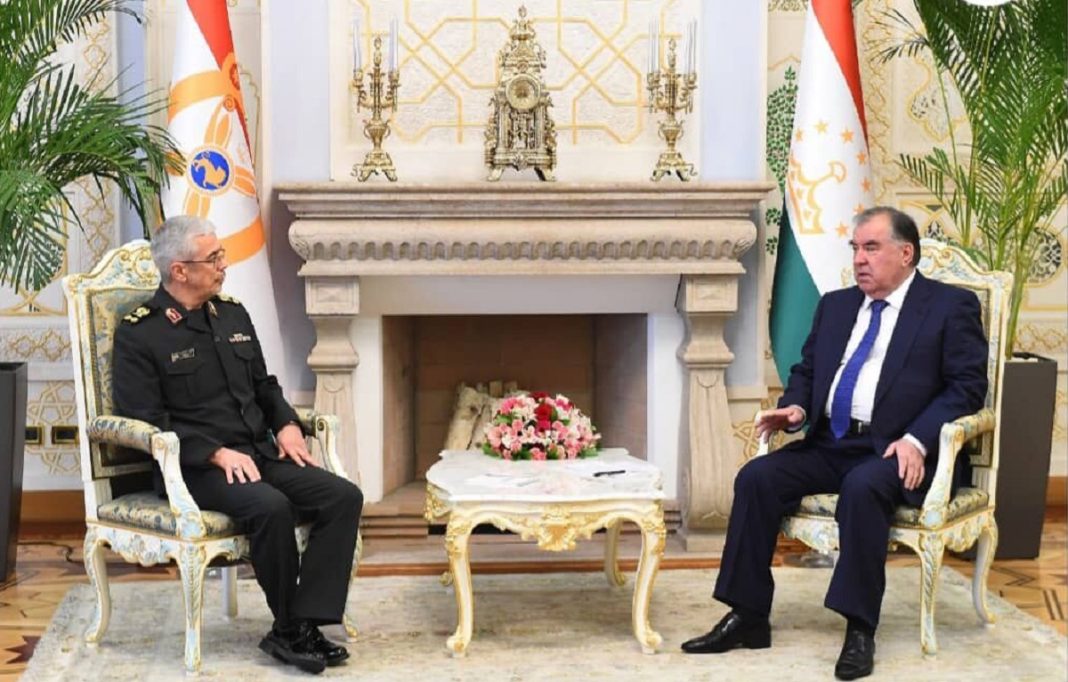 The expansion of military interactions with Tajikistan is among the main priorities of the Islamic Republic's Armed Forces given the two countries' strategic position in west and central Asia, a senior Iranian military commander says.

Chairman of the Chiefs of Staff of the Iranian Armed Forces Major General Mohammad Baqeri, who is in Tajikistan at the head of a high-ranking delegation, made the remarks in a meeting with Tajik President Emomali Rahmon in Dushanbe on Tuesday.

“Strengthening, upgrading and developing the level of joint military interaction and relations between the two countries and increasing cooperation in various military fields are among the important priorities of Iran’s Armed Forces with Tajikistan,” Baqeri stated.

He expressed hope that the two countries would accelerate the improvement of military and defense cooperation in the future.

The senior Iranian commander further stressed the importance of promoting peace and stability in Afghanistan as a neighbor and friendly country and noted, “The Armed Forces of the two countries can help Afghanistan establish security and peace by developing military and regional cooperation.”

Rahmon, for his part, said Tajikistan’s Armed Forces welcomes the expansion of military and defense cooperation with the Iran.

The Tajik president pointed to the inauguration of a manufacturing plant for tactical unmanned aerial vehicles in his country earlier in the day and added that such cooperation should reach its highest level in all military fields.

He noted that cultural commonalities are still regarded as the main basis for strengthening ties between the two nations and added that common historical and linguistic bonds have provided unparalleled conditions for further development of relations in defense, military, cultural, political and economic areas.

During an official ceremony in Dushanbe, Iran inaugurated a manufacturing plant for indigenously-developed Ababil-2 multi-role tactical unmanned aerial vehicles in Tajikistan in a bid to promote joint defense and military cooperation.