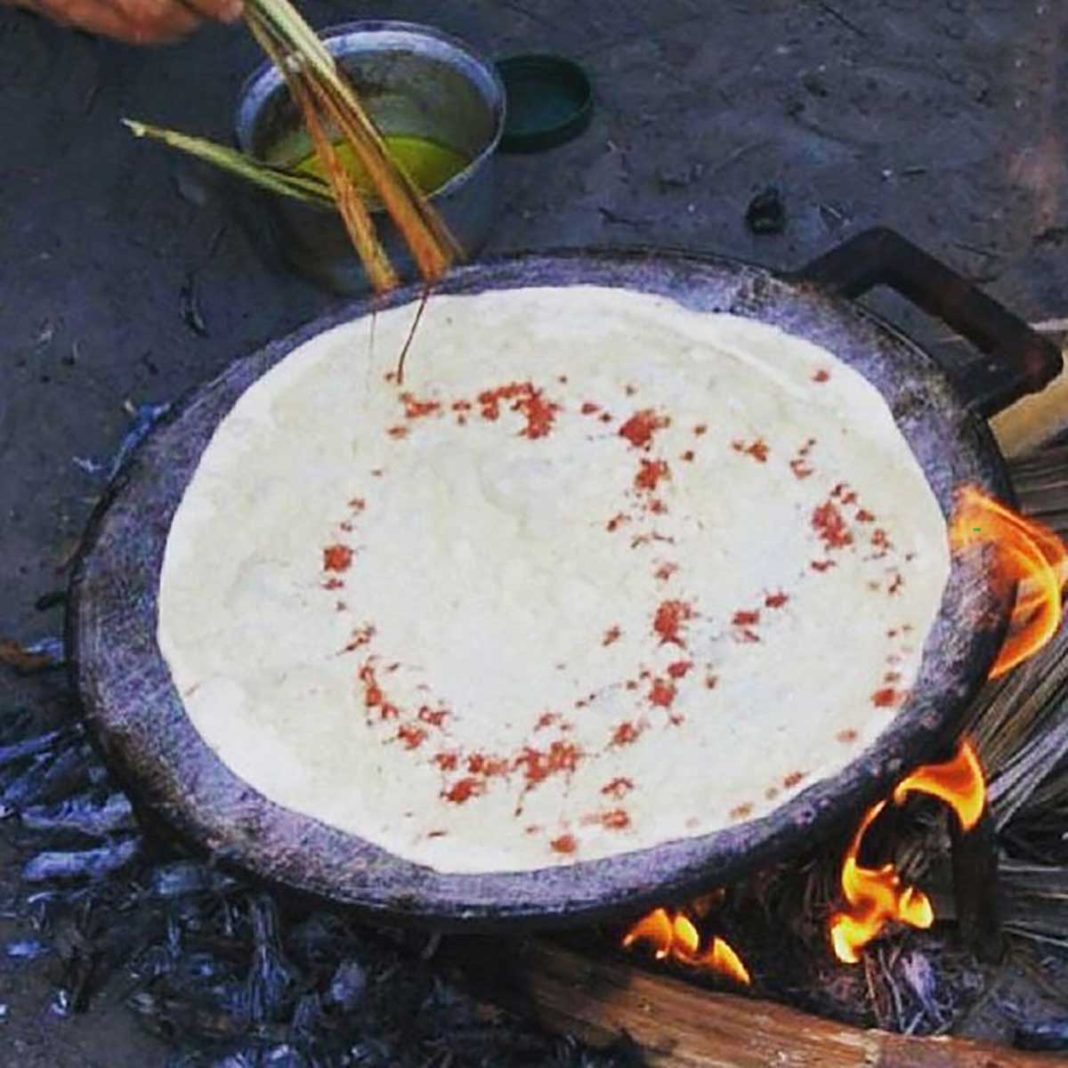 Hormuz, an Iranian island in the Persian Gulf, is home to the only mountain in the world whose soil is edible and is used in making a delicious type of bread, The most important of which is Tomshi bread.

In Hormuz Island , there are 20 types of home-made bread, whose lovely smell wafts through many neighborhoods of the island during baking. They all make perfect travel gifts. Most of the bread types are made of flour, oil, and sugar, with the most famous one being Tomshi bread. This bread made of soil of the mountain.

How To Make Tomshi Bread

The soil of the mountain is used by the locals to bake fish and bread, and make pickles, jams, and sauces.

This beautifully-coloured soil has a special place in the native foods of the island. It is used in many seafood recipes and even in a local bread called “Tomshi”. The name is derived from the Farsi phrase “Tou Moshti” which means a handful of something. This is because you need a handful of the dough to bake this special type of bread.

In order to bake this bread, the locals spread a thin layer of dough on a thin tray. Then they add eggs and cheese. At this stage, they add a sauce made from the island’s soil. Next, they add the fish sauce.

The same bread is cooked in neighbouring islands;, but the one in Hormuz has its own special recipe.

The wide-ranging colours of the soil include white, yellow, red, green, orange, beige, brown, light turquoise, and even gold. From a geological perspective, the island is one of the most important salt domes of the world. Due to these features, it is given the name lithology lab.

1. Since the bread is usually served with local Mahyawa and Souraq sauces, you’d better not add salt. You can, however, add a half-spoon of it if you want a saltier taste.

2. You need to use the pan especially designed to cook Tomshi.

3. The bread is served with cheese and eggs in different regions of Hormozgan Province, in southern Iran.

Mahyawa is a type of sauce made of fish, salt, mustard, coriander, and fennel.
Souraq is also another type of sauce prepared with a mixture of sardines, water, salt, roses, and bitter orange peel. It is served with local bread.

– Where can you get the best Tomshi bread?

It can be found at Hormuz Island and Qeshm Island. In addition, if you wish to watch the baking process of different types of bread, you should go the Ramchah village located in southwestern Qeshm, located 4 kilometers away from the southern shores and 17 kilometers from the easternmost section of the island.

Located in the Strait of Hormuz, eight kilometres off the Iranian coast, the Hormuz Island is part of Hormozgan Province (Wikipedia). There is a strange mountain on the island whose soil is used as a kind of spice by the locals! This seems to be the only edible mountain of the world.