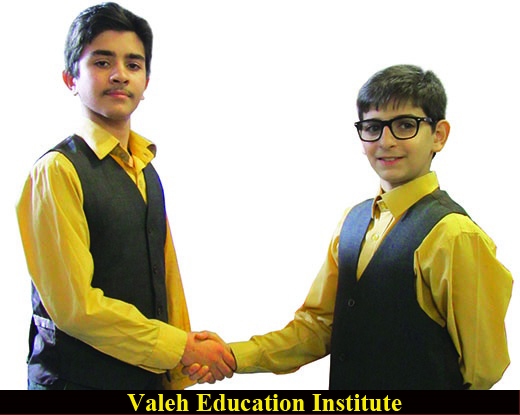 Two successful teenagers stress motivation and perseverance for students if they seek to walk down the path of science.

It is said that children build a country’s future. What they receive today could be the basis for what they do tomorrow. Students are usually asked to follow the example of successful people.

Naarengi [Tangerine], a magazine which is aimed at children and their parents and published by Valeh Education Institute, carried out an interview with two such successful students: Edris Jassemi, an advisor to Minister of Cooperatives, Labor and Social Welfare Ali Rabiei, and Andisheh Sadeghi, the gold medal winner of the Australian Mathematics Competition. The following is a brief translation of the interviews with the two students of Valeh Education Institute:

Edris talks about his presence in a national conference on social welfare and how he was named an advisor to the minister:

“I don’t like failure and dismay. Failure is not the end of a path. Obstacles in the way can turn into an experience to help me take the next step. […] I think about the future, not the past […]

“I got familiar with Mr. Rabiei through the Iranian Diabetes Society. [….] I read out a text there saying, ‘We are the children of Iran, a rich, powerful and advanced Iran.’ [….] You may ask who I am and what I am doing here. I am one of those who should build the future of this country.

“I know that the world’s wheels are spinning thanks to science, and those nations which are scientifically powerful have more to offer to the world.

“My generation is expected to help the endeavors of the previous generations for Iran’s development drive to bear fruit. [….] I am a student suffering from diabetes, but the disease has not caused me to distance myself from the world; rather it has motivated me to have more contact with the world and learn more about my disease.

“As they say, we can turn threats into opportunities. At a time when the world does not want to see Iran grow, we can be of help. [….] On behalf of all children in my generation, I want to offer a helping hand to my country. So trust us.”

“Everybody should set a goal for their future and try to reach it; otherwise nothing will happen in their lives. […] Life goes on as people try to materialize their goals and dreams, material and spiritual alike. The universe and what’s in it is a reflection of what you seek, like an echo in the mountain. I dream of being involved in aerospace. I like to be the one in charge in NASA one day. When you set a goal for yourself and have high motivation to achieve it, you’ve covered half the distance.”

“[….] Iran is qualified for a giant leap forward. Iranians love their homeland and this is a big asset. [….]

“Iran is not where it should have been. Part of the blame lies with foreign factors. We are to blame too. Iranians are not content with what they have. The thirst for science is good, but it is destructive when it comes to wealth. [….]

“The government should prevent brain drain. People make headway building on the country’s potential, but they leave for other countries when they are given more incentives and this deals a blow to Iran. [….]

“Another issue is child labor. Something must be done for those children who have to work and be the family’s breadwinner despite their innate talents. […]”

Andisheh says failure is a prelude to success.

“[….] Opportunities are like clouds, they come and go. We need to have motivation to seize them. To pull off success, you need to go ahead step by step and move forward along the path you’ve chosen. I aim to study in the world’s best university and teach there down the road.

“In Iran investment in teenagers is not enough. They can earn the country honor by winning in scientific and sport events.”

Edris: “They invest in people in Iran after they enter the university. There the students face multiple challenges, but they lack the necessary skills to overcome them. The process is different in advanced countries where they evaluate students’ talents and capabilities at a younger age and put them on the right path. [….]”

Andisheh: “School is the launching pad for those students who love knowledge. [….] The students’ motivation and big aims also come into play. Those who blame others for their failure are the real losers.”

Edris: “Many Iranian students who love knowledge cannot receive education. They should have motivation and the government should rush to their help. [….]”