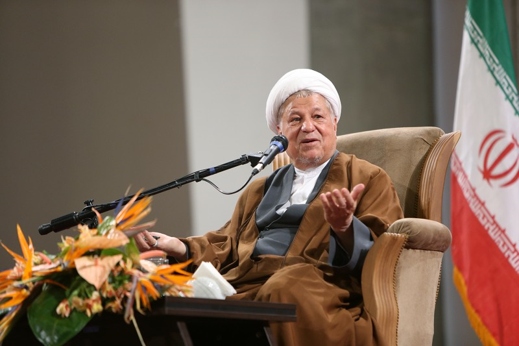 The chairman of Expediency Council has said that the late Imam did not approve of violence as a means to push the revolution’s agenda.

The chairman of the Expediency Council says that the late Imam Khomeini championed a revolution which could not stand violence.

Ayatollah Akbar Hashemi Rafsanjani made the comment in the opening of an International Conference on World without Violence in Imam Khomeini’s Worldview which was held earlier this month and added that the revolution the late Imam Khomeini championed was free of violence.

Aftab-e Yazd daily on June 6 published the top councilor’s remarks. The following is the translation of what else Ayatollah Rafsanjani said in the conference:

Islam is a religion of kindness and compassion and the late Imam – who was a harbinger of Islam in modern times – was a promoter of Islamic mercifulness. The revolution the late Imam spearheaded was free of any [form of] violence, and violent acts had no place in his planning.

A world free of violence is what the wise and thoughtful humans deserve in modern times. Humans should not live with violence; rather, they are expected to base their lives on logic and reasoning.

Regrettably the world of Islam has turned out to be the most violent. Now that humans who have taken giant steps toward elevation, each day the Islamic world is witnessing a catastrophe and this is counter to the delicate and humane soul of Islam.

Prior to the revolution when armed activities were a means of struggle [against the Pahlavi regime], the late Imam would instead focus on people’s potential, disapproving of armed struggle.

Compared with other revolutions in the world, Iran’s Islamic revolution is unique because it was formed building on people’s willpower and heartfelt desire and has since been supported by the people.

The late Imam would always underline that people are the real rulers of the [Islamic] establishment, they have the right to govern and they can solve the problems on their own.

Following the victory of the Islamic revolution, by the order of the late Imam all institutes inside the country were kept unchanged and only certain individuals who had committed crimes were put on trial. The communist revolutions, however, carried out bloody purges and a number of office holders from the previous systems were punished.

If the world takes a fair look at the late Imam, his remarks and works, it will learn that the Islamic Republic has been designed based on a broad framework. One should admit that there are weak points [in the system], but they are all the result of [the performance of] the lawmakers.

In this establishment, all affairs – including choosing the Supreme Leader, president, parliament [members] and Cabinet ministers – are administered by people, directly or indirectly. This establishment loses its validity in the absence of people’s choice.

There are some who intervene in certain affairs, trample upon people’s rights and think they have every right to ignore popular vote. Such measures are not in line with Islamic orders and way of thinking as well as the late Imam’s viewpoints. Even God Almighty does not let go of those who trample upon people’s rights. They have to win people’s satisfaction; in other words, they need to secure the satisfaction of every single person in the country if they seek divine forgiveness.

During the imposed war, the Iraqis fought against the Iranians, did injustice and set foot on our soil. Some of them were captured, but they attended Friday prayers in the country thanks to the kindness they were shown by the Iranians. Members of the Badr Brigade that are now taking on ISIL in Iraq are from the ranks of the POWs who repented of their wrongdoings in Iran.

When it comes to talking about elections, some turn fearful. It should not be so. To handle the elections, love should be present. Some reactionaries try to display ossified behaviors. It is true there are some people like that, but they do not belong to the Islamic establishment, revolution and the [ideals of the] late Imam.

Iran’s Constitution has called for a society free of violence. If you see violence [anywhere], it is against our principles. Iran has been repeatedly subject to injustice. They [the Westerners] armed Saddam to fight against Iran, but Iran refused to take revenge.

What Saudi Arabia is doing in Yemen is condemnable. Why is that Saudi Arabia – which hosts Muslims [for Hajj Pilgrimage] and is the guardian of the Kaaba – is raining down bombs on the Yemenis and killing civilians each day?

What Saudi Arabia is doing is a dark stain which will stay on history. Under the influence of Wahhabism, the Saudis have displayed such inappropriate behavior. Their ancestors were those who destroyed Karbala and Medina. Not only did they kill the Shiites, they also shed the blood of fellow Sunnis.