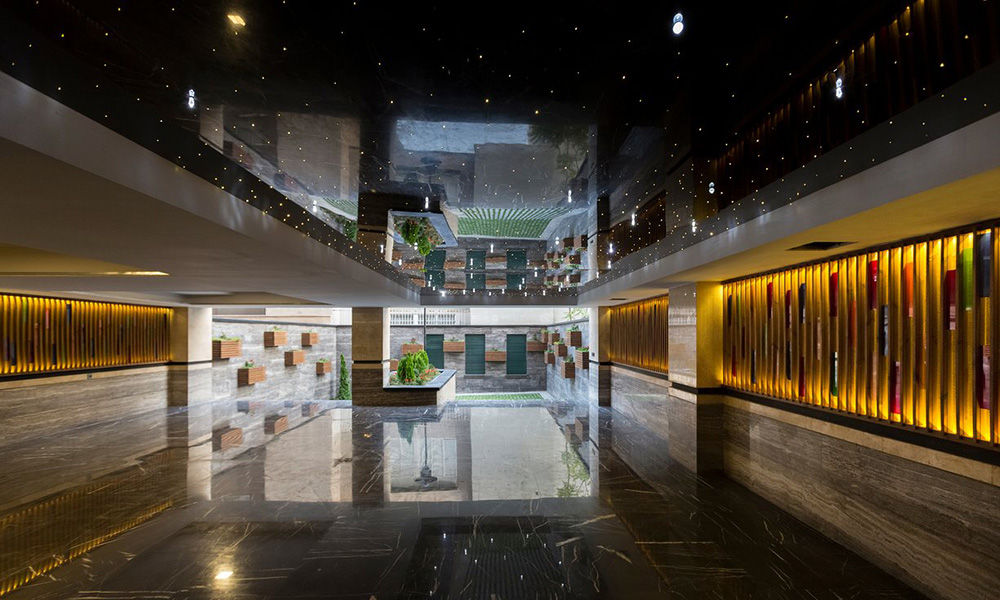 From its iconic Azadi (freedom) tower, which has ridden out a revolution, an eight-year war and innumerable protest rallies, to the elegant museum of contemporary art or the city theatre, Tehran has long been home to a brand of wacky, yet distinctively Iranian, contemporary buildings.

Here is a report by The Gaurdian, as covered by Haft-e Sobh Newspaper:

In the few decades leading up to the 1979 Islamic revolution, architects such as Houshang Seyhoun, Kamran Diba and Hossein Amanat pushed the boundaries of traditional Persian architecture by using traditional elements in modern designs; Amanat’s Azadi tower epitomises those efforts.

After the revolution, however, the Iranian capital’s architectural scene suffered a serious blow as the country was consumed first by war then by post-war reconstruction. But more recently, with young architects educating themselves in worldwide trends, and the relative stability of the country compared to its post-revolutionary upheaval, a new generation are following in the footsteps of the veterans. The city has embraced a bold, experimental architecture.

Tehran in 2016 “is in a constant mood of reconstructing and rebuilding itself,” according to Mehran Gharleghi, director at London’s Studio Integrate, who has previously worked in Tehran for the prominent architecture firm Mirmiran. “The municipalities accommodate new designs, at least compared to Europe, and there’s a big appetite for new buildings.” 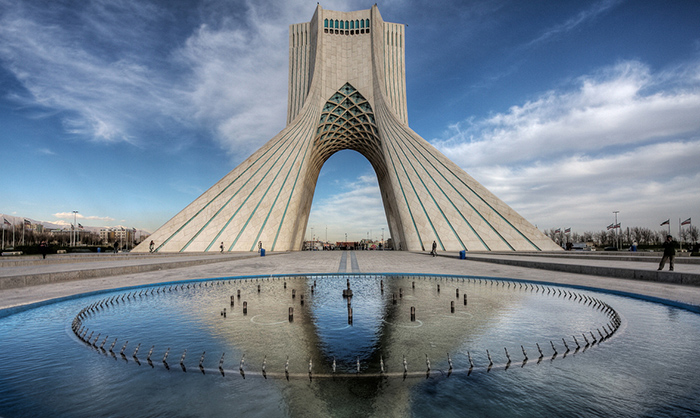 “Tehran has a unique structure,” he adds. “It is more dynamic than any European capital, and at the same time it’s not a typical Middle Eastern city. Its urban scene is quite chaotic at the first glance. But, similarly to cities like Tokyo, this means Tehran is constantly able to renew its visual identity.”

Tehran’s mayors are also influential. Former president Mahmoud Ahmadinejad was one. And the incumbent, Mohammad Bagher Ghalibaf, who has run eye-catching projects such as installing Picasso and Matisse billboards on the city’s streets, has presidential ambitions himself – leading, says Ghaleghi, to “the motivation of Tehran’s mayor to commission ambitious projects and improve the urban set-up”.

Architects in Iran also enjoy a great deal of freedom. “Their hands are not tied,” says Kamran Rezaianpour, founder of the architecture firm Idehandish, which has offices in Tehran and Shiraz. “The mayor’s office won’t make obstacles; the main issue is to persuade the owner. In Tehran, the mayor’s office is mainly concerned with two issues: parking spaces and the height of buildings.”

Nor is the new architectural freedom limited to the capital. “In fact, in other cities, such as Isfahan, Shiraz, Mashhad and Tabriz, you’ll see more creative works than in Tehran,” Rezaianpour says. “In the past, there was a huge difference between the capital Tehran and big provincial cities in that regard, now this has been narrowed.” 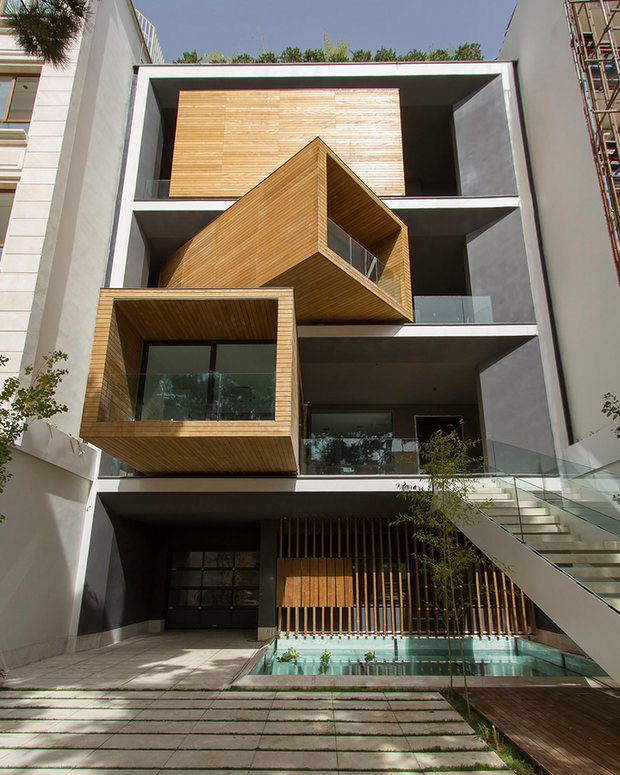 Built in 2014 in Tehran’s affluent Darrous neighbourhood, the Sharifi-ha house is a seven-floor building with three rotating blocks that turn 90 degrees. Each block is on a rotating base that allows the owner, Farshad Sharifi, to change its direction at the push of a button. The house has a swimming pool, a gym and a cinema.

“The openness/closure of the building’s volume is a reference to traditional Iranian houses, which would dynamically serve as seasonal modes of habitation by offering both a Zemestan-Neshin (a winter living room) and Taabestan-Neshin (a summer living room) to their residents,” its lead architect from Next Office, Alireza Taghaboni, has written. 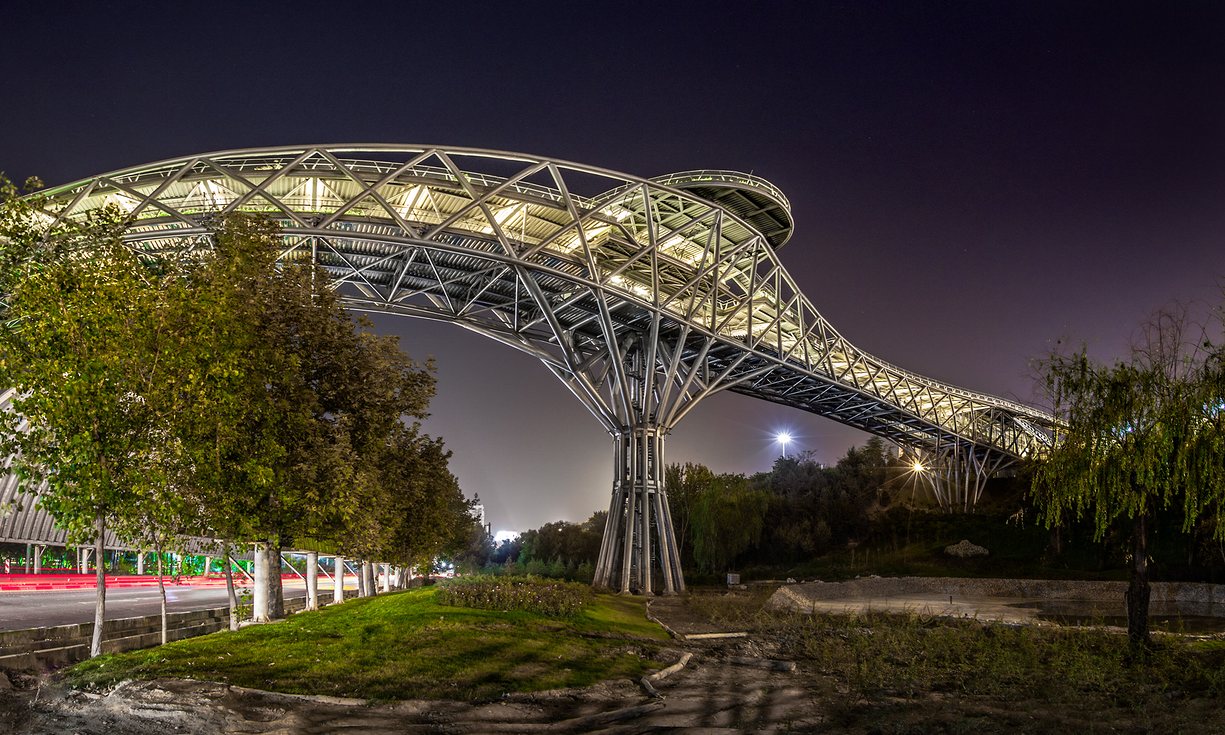 Unveiled in 2014 by Tehran’s mayor, Tabiat (nature) bridge is a spectacular hi-tech structure designed by young architects Leila Araghian and Alireza Behzadi. Araghian was 26 when she designed the bridge, which took over two years to build and has since become a popular hangout for younger people and a site for morning sports. On public holidays, thousands flock there to picnic.

The bridge received a great deal of international attention after it was named last year among the winners of the Architizer A+ awards, a global competition based in New York. The 270m structure, which connects two parks in north Tehran, is built on three large pillars. It has multiple pathways and three floors of restaurants, cafes and seating areas. “I didn’t want it to be just a bridge that people would use to get from one park to another,” Araghian told the Guardian last year. “I wanted it to be a place for people to stay and ponder, not simply pass.” 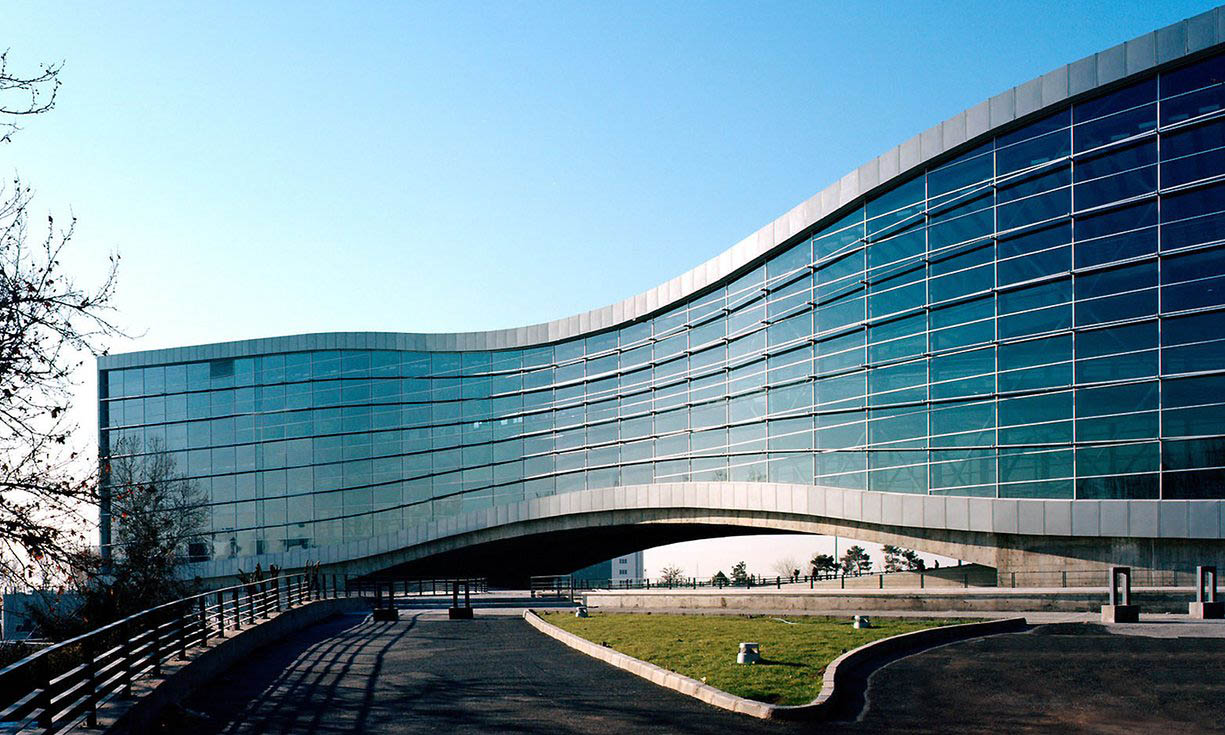 Reza Daneshmir’s Pardis Mellat cinema is responsible in many ways for kicking off the new burst of creativity in the capital, and was one of the first projects to gain international recognition after the revolution. “It was commissioned by Tehran’s mayor and completed in 2008; the state sector continued to commission similar works later such as the Tabiat Bridge,” says Gharleghi.

The cinema is in the southern corner of Tehran’s popular Mellat Park. One of its central features is a 57-metre arch with no supporting columns, and the building is designed as a place to hang out after watching films. 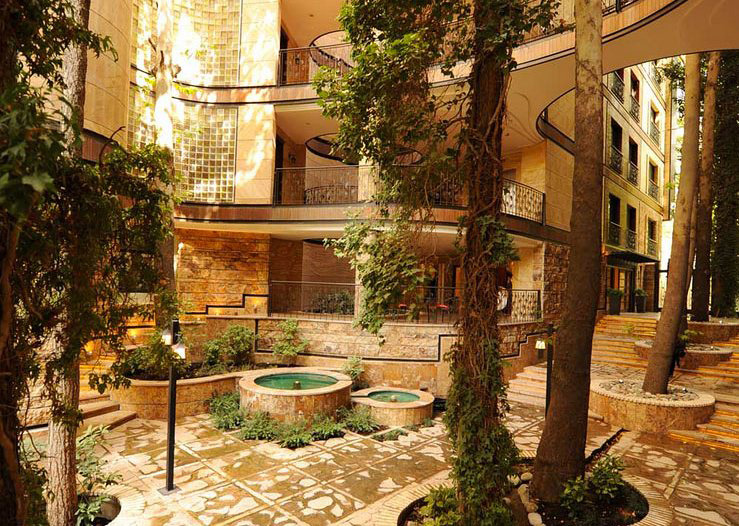 Mohammad-Reza Nikbakht’s residential building in Niavaran, north Tehran, built in 2013, was specifically designed to ensure no trees were cut down during its construction. “We’ve seen too many times in Tehran that 150-year-old or 200-year-old trees are cut for creation of new flats,” he said. “In my project, we faced a total of 128 trees with an average age of 70 years.” The initial plan required around 40 trees to be cut, but Nikbakht redesigned and persuaded the municipality to preserve all of them.

“We tried to protect them by covering them up during the construction. One tree dried up and another caught fire – the rest remained intact,” Nikbakht says. The residential complex has two blocks and each have five floors. “After this project, many people have become conscious about preserving the trees and the authorities have also increased the cost of cutting trees for the purpose of constructing new houses or offices.” 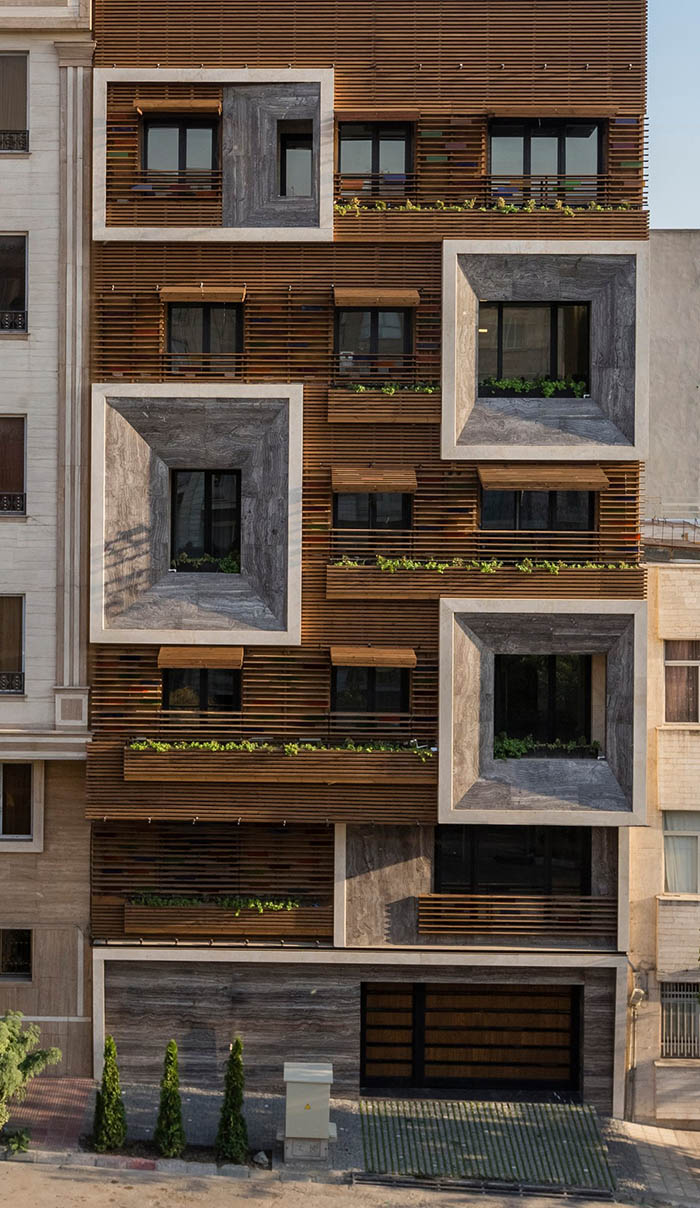 The Orsi Khaneh, designed by the Keivani brothers, is a residential block of flats completed in September 2015 in Tehran’s middle-class Gisha neighbourhood. “One of our main concerns was how to bring our architectural values to today, our aim was to make our Iranian architecture up to date,” Nima Keivani says. “In this project, we used the concept of Orsi windows seen in Iranian houses in the city of Kashan and tried to use it in today’s architecture.”

The building has seven floors, five of which are apartments, and a garden on its roof. “We also used stained glass and used the six colours that have traditionally been seen in Iranian windows,” Keivani said. 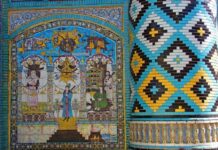 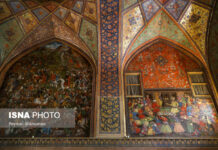 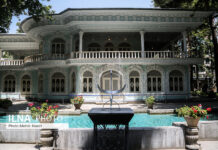