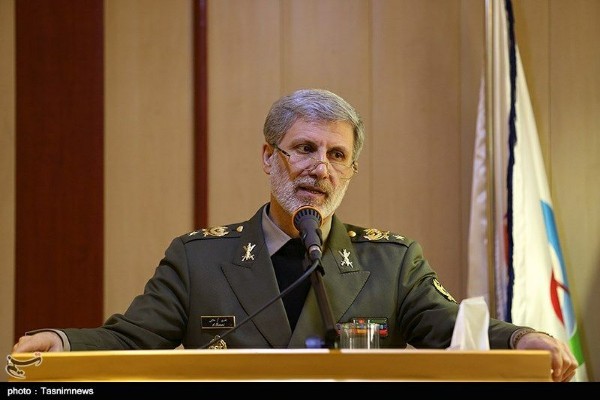 Iran’s defence minister has reminded the warring sides in the Caucasus of the importance of Iran’s border security, vowing to take “more measures” if more bullets are mistakenly fired at Iranian towns.

Iranian Minister of Defence and Logistics of the Armed Forces Brigadier General Amir Hatami said even a stray bullet must not be fired at Iranian soil.

“It would not be acceptable, at all, that even a bullet hit the Islamic Republic of Iran’s borders due to error and negligence, and the warring sides in the Caucasus region have been reminded of the necessary points they should consider in that regard,” the defence chief said.

He made the comment after Iran’s border areas were fired at, by mistake, amid clashes between the warring sides in Karabakh.

“In this incident, some bullets were mistakenly fired at the Islamic Republic of Iran’s border areas,” he said, adding, “Iran’s borders are a key and important issue for the Armed Forces.”

“We hope the neighbouring countries involved in the conflict will take heed of the points we told them because the security of Iranian citizens, including those on border areas, is an important issue,” the defence minister said.

“If this issue continues, more measures will be adopted (by Iran), and it would not be acceptable for Iranian citizens to be harmed, even by mistake,” he noted.

Military forces of the Azerbaijan Republic and Armenia, which are divided over the ownership of the disputed region of Kharabakh, once again opened fire at each other on their common border a few days ago after two months. Each side accused the other of having started the fighting, which is still ongoing.