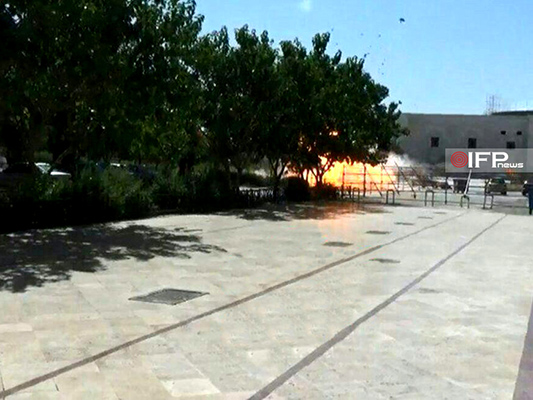 An Iranian official says three people were wounded and three killed, including the attackers, in a Wednesday terrorist attack on Imam Khomeini Mausoleum in southern Tehran.

According to Mohammad-Ali Ansari, an official with Imam Khomeini Mausoleum, two terrorists entered the western part of the shrine at 10:40.

“Explosives were attached to both attackers. Immediately after entering the shrine, they started blind shooting. During the shootout, three security guards were wounded and a worker was killed,” Ansari said.

“In front of the main hall of the shrine, the police forcers started shooting at the terrorists, and this led to the explosion of on attacker. The second terrorist escaped, but he was finally shot dead by the police,” he added.

The police later defused the suicide vest worn by the slain attacker, Ansari said, adding the terrorists possessed a number of grenades and explosives.

Meanwhile, Mizan reported that a female attacker was also involved in the incident, and was arrested before killing herself by taking cyanide.

The attack on Imam Khomeini Mausoleum came as a number of terrorists also opened fire on Iran’s Parliament in a simultaneous attack. Several people have also been killed and wounded there.